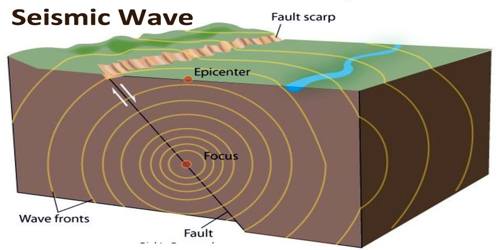 Seismic wave is an elastic shock wave that travels through the earth, as from an earthquake or explosion; also, one of four distinct waves generated by an earthquake. Earthquakes generate four principal types of elastic waves; two, known as body waves, travel within the Earth, whereas the other two, called surface waves, travel along its surface. Seismographs record the amplitude and frequency of seismic waves and yield information about the Earth and its subsurface structure. Artificially generated seismic waves recorded during seismic surveys are used to collect data in oil and gas prospecting and engineering. 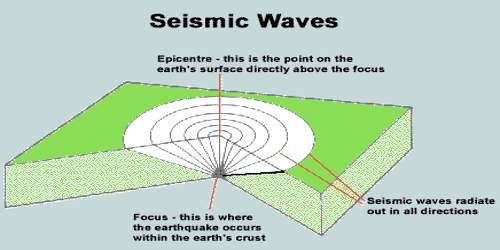 Seismic waves are studied by geophysicists called seismologists. Seismic wave fields are recorded by a seismometer, hydrophone (in water), or accelerometer. The propagation velocity of the waves depends on density and elasticity of the medium. Velocity tends to increase with depth and ranges from approximately 2 to 8 km/s in the Earth’s crust, up to 13 km/s in the deep mantle.

Classifications and Usefulness of Sesmic Wave

Earthquakes generate three types of seismic waves: P (primary) waves, S (secondary) waves and surface waves, which arrive at seismic recording stations one after another. Both P and S waves penetrate the interior of the Earth while surface waves do not. Due to this, P and S waves are known as “body waves”. Surface waves arrive last and are the least interesting to seismic tomographers because they don’t penetrate deep inside the Earth, therfore provide little information about inacessible terrain. 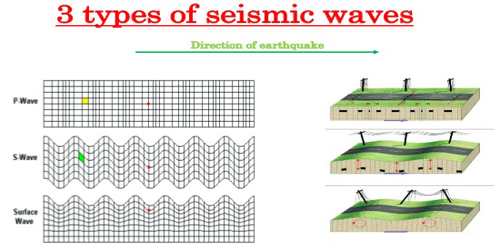 S (secondary) waves – The S wave or secondary wave, which is the second wave we feel in an earthquake. An S wave is slower than a P wave and can only move through solid rock, not through any liquid medium. It is this property of S waves that led seismologists to conclude that the Earth’s outer core is a liquid. S waves move rock particles up and down, or side-to-side–perpindicular to the direction that the wave is traveling in the direction of wave propagation. In the Earth the speed of S waves increases from about 3.4 km (2.1 miles) per second at the surface to 7.2 km (4.5 miles) per second near the boundary of the core, which, being liquid, cannot transmit them; indeed, their observed absence is a compelling argument for the liquid nature of the outer core.

Surface Waves – Seismic surface waves travel along the Earth’s surface. They can be classified as a form of mechanical surface waves. They are called surface waves, as they diminish as they get further from the surface. They travel more slowly than seismic body waves (P and S). In large earthquakes, surface waves can have an amplitude of several centimeters. 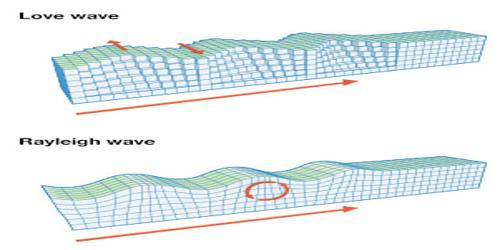 In the case of local or nearby earthquakes, the difference in the arrival times of the P and S waves can be used to determine the distance to the event. In the case of earthquakes that have occurred at global distances, three or more geographically diverse observing stations (using a common clock) recording P-wave arrivals permits the computation of a unique time and location on the planet for the event.

A quick way to determine the distance from a location to the origin of a seismic wave less than 200 km away is to take the difference in arrival time of the P wave and the S wave in seconds and multiply by 8 kilometers per second. Modern seismic arrays use more complicated earthquake location techniques.