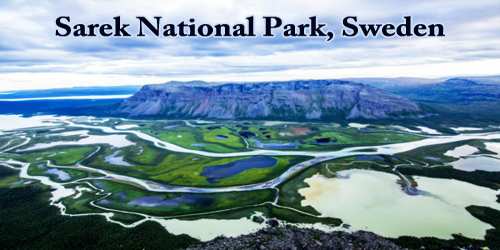 Sarek National Park (Swedish: Sareks nationalpark) is the national park with six of Sweden’s thirteen highest mountains and almost 100 glaciers, and found in Lapland in the far north of Sweden, is one of the most beautiful national parks in Europe due to its epic almost larger than life scenery. Established over a century ago, the national park is home to a rich array of wildlife across its mountains, valleys, rivers, and glaciers. It is adjacent to two other national parks, namely Stora Sjöfallet and Padjelanta. The shape of Sarek National Park is roughly circular with an average diameter of about 50 km (31.07 mi).

Sarek National Park features about 100 glaciers and several mountains over 2000 meters in the area of land under Jokkmokk Municipality, in Norrbotten County (northernmost county of the country). As the park is within the Laponian Area, which is a UNESCO World Heritage Site; this national park has special significance.

The most noted features of the national park are six of Sweden’s thirteen peaks over 2,000 m (6,600 ft) located within the park’s boundaries. Among these is the second-highest mountain in Sweden, Sarektjåkkå, whilst the massif Áhkká is located just outside the park. The park has about 200 peaks over 1,800 m (5,900 ft), 82 of which have names. Sarek is also the name of a geographical area which the national park is part of. The Sarek mountain district includes a total of eight peaks over 2,000 m (6,600 ft). Due to the long trek, the mountains in the district are seldom climbed. There are approximately 100 glaciers in Sarek National Park.

The national park also is known for its wildlife, including large elk and many predators. Meltwater from the many glaciers flows into Sarek’s artery, the Ráhpaaädno river, which creates the alpine world’s most well-known delta. The area bears the stamp of the inland ice sheet, and a hike through Sarek is a trip through Sweden’s geological history. There is not much flora in the park, yet the animal life in the great valleys is thriving. A hiker may catch the sight of a bear, wolverine, lynx or a large elk.

Sarek is a popular area for hikers and mountaineers. Beginners in these disciplines are advised to accompany a guide since there are no marked trails or accommodations and only two bridges aside from those in the vicinity of its borders. The area is among those that receive the heaviest rainfall in Sweden, making hiking dependent on weather conditions. It is also intersected by turbulent streams that are hazardous to cross without proper training. 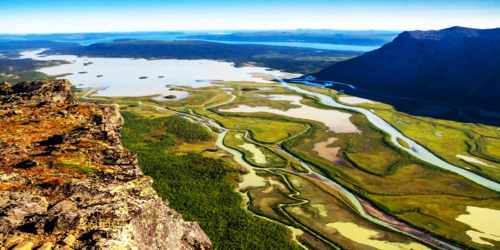 The region’s first inhabitants arrived with the retreat of the inland seas 8,000 years ago. They were nomads who lived in Northern Scandinavia, and probably ancestors of the Samis. Initially, they were hunter-gatherers, living off reindeer. For those people, the mountains often had religious connotations, and several were Sieidi (places of worship). Offerings, such as antlers from reindeer, were often made in those places. One of the most significant Sieidi was situated at the foot of Mount Skierfe (1,179 m (3,868 ft) high), at the entrance to the Rapa Valley. Samis from the entire region gathered in this place for ceremonies. Mount Apär itself, was believed to be the home of demons, and legend tells of an illegitimate child’s ghost inside it.

As the Sami are indigenous people it becomes a fine balance in protecting their way of life and preserving the natural landscape. As the park is situated on territory belonging to the Sami villages of Sirkas, Jåhkågaskka, and Tuorpons, the Sami who are legal residents of those villages are permitted to pasture their reindeer in the park too. In carrying out these activities, the Sami have the right to use motorized vehicles such as snowmobiles or helicopters yet these activities may affect the natural wildlife.

In Sarek National Park, as in the most of Sápmi, a large number of the locations have names originating from the Sami languages. These languages have several variations and their written forms have changed over time, which explains why some placenames do not always correspond with each other in different sources. The most common Sami names for locations or features in the park are tjåkkå or tjåkko (mountain), vagge (valley), jåkkå or jåkko (stream), lako (plateau) and ätno (river). An example of this is Rapaätno, meaning Rapa River. These names are also the official Swedish names of the locations.

In 1732, it is recorded that the first Swede; by the name of Carl von Linné, ventured into this region to explore the mountains. Charles Rabot was a Frenchman who was the first to summit Sarektjåkkå (the second largest mountain in the country located on the eastern border of Sarek National Park) in 1881.

In 1872 the first national park was opened, this inspired the Swedish polar explorer, namely Adolf Erik Nordenskiöld to propose using the new concept to protect Swedish nature. Various men gathered together and parliament accepted this which led to the first 9 National Parks in Sweden being officially declared in 1909. At that time there were not any in Europe. Sarek National Park was one of those parks and consequently can lay claim to fame as being among the oldest in Europe.

In 1996, Sarek Park was classed as a World Heritage Site including the adjoining areas of Padjelanta, Stora Sjöfallet, Sjaunja, and Stubba nature reserves, Muddus National Park and three adjacent areas, making a total of 9,400 km2 (3,600 sq mi). The whole area was added to the World Heritage as a mixed site (“of cultural and natural value”) called the Laponian area. The park also became part of the Natura 2000 network. Being on the World Heritage list allowed the park to have its first protection plan. The plan was written with thorough consultation of the Sami, who had not been consulted when the park was established. The WWF paid for this process.

The 2007 Environmental Protection Agency plan for the national parks includes a plan to expand Sarek to incorporate the area of the Laitaure Delta and the Tjuoltadalen Valley to the south part of the park. This extension had already been proposed in the 1989 plan, but the situation changed with the World Heritage designation as the proposed extension would make up a sizable part of the Laponian Region. 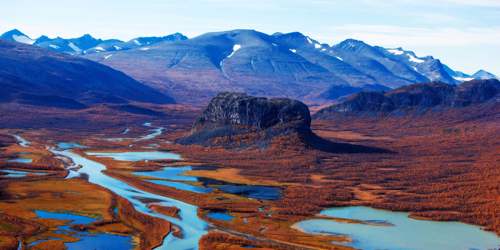 In total, Sarek National Park is home to more than 200 peaks and over 100 glaciers. Gorgeous mountain peeks, miles of hiking, and tremendous natural beauty make Sarek one of the most incredible places in Sweden. The Park is situated in the Jokkmokk Municipality, Norrbotten County, Sweden, north of the Arctic Circle, 50 km (31.07 mi) from the Norwegian border.

The area of the park is 1,977 km2 (763 sq mi) and it is adjacent to the national parks Padjelanta (in the west) and Stora Sjöfallet (in the north). The parks have a combined area of approximately 5,500 km2 (2,100 sq mi). There are also a number of nature reserves nearby.

Sarek National Park is the most mountainous region in Sweden and it is the part of the country that mostly resembles an alpine countryside. Within the park are 19 summits higher than 1,900 m (6,200 ft), the most noted being the second highest summit in Sweden after the Kebnekaise the Sarektjåkkå with a height of 2,089 m (6,854 ft) The lowest altitude in the park is found in the southwest, near Lake Rittakjaure, at 477 m (1,565 ft).

Sarek National Park was established in 1909, with the setting aside of an area of 746 square miles (1,931 square km), and it adjoins two other national parks Stora Sjöfallet on the north and Padjelanta on the west. The park is made up of three types of landscape, sometimes difficult to differentiate between: large valleys, massive mountains, and high plateaux. The largest valley of the park, which is also the most noted, is the Rapa Valley. Among the other notable valleys, outside the Rapadalen network, are the Kukkesvagge that makes up the north-eastern border of the park, and the Njåtsosvagge near the southern border. The largest plateau is the Ivarlako, east of the Pårte massif, with an altitude starting at 660–850 m (2,170–2,790 ft). West of Pårte, the Luottolako plateau covers an area of 45 km2 (17 sq mi) and has an even higher altitude at 1,200–1,400 m (3,900–4,600 ft).

The park has over 100 glaciers, making it one of the most glacier-rich areas in Sweden. The glaciers are relatively small, the largest being Pårtejekna in Pårte at 11 km2 (4.2 sq mi). However, some of the others are relatively large for Sweden, since the largest Swedish glacier, Stuorrajekna in Sulitelma (south of Padjelanta), measures 13 km2 (5.0 sq mi).

The area of the national park, and the eastern Sarek Mountains in particular, was the last of part of Fennoscandia to be deglaciated. The last remnants of the Fennoscandian Ice Sheet melted there slightly after 9,700 years BP. There are not any marked trails for hikers, as well as no accommodation. Anyone hiking in this park should be an intermediate to advanced hiker; as the lack of shelter, along with alternating weather and dangerous wild terrain does require experience to safely explore. Despite the streams being considered dangerous and hard to cross without the proper experience, there are only two bridges. The water levels tend to be higher in the summer months, as the ice glaciers have melted more. This area is also noted as being among the rainiest in the country especially in summer, which affects hiking.

Sarek National Park is situated in the Scandinavian Montane Birch forest and grasslands ecoregion, with a minor section in the Scandinavian and Russian taiga. With regard to the flora and fauna, Sarek does not have a wide variety of species. This is mainly explained by the fact that most of the park, except the south and south-east part, is above the growth-limit of conifers, which is at an altitude of about 500 m (1,600 ft) in this region. Adding to this, unlike most of the region, Sarek National Park has few vast lakes or swamps. A total of approximately 380 species of vascular plants have been found in the park, as well as 182 species of vertebrates, 24 mammals, 142 birds, 2 reptiles, 2 amphibians, and 12 fish. Many of these species are on the Swedish red list of endangered species, notably the large carnivores.

The vegetation follows a fairly strict altitudinal zonation, as a result of the climate, and implying a similar zonation of fauna, although this is often less strict.

This park is ideal for anyone seeking to be in the best-preserved untouched parts of wilderness. Thousands of years ago, hunter-gathers lived in this area mainly feeding on the reindeer. The great mountains were seen as religious places and there is evidence of sacrifices and places of worship being made at the foot of the mountains. The lack of marked trails and accommodations makes it very difficult for visitors to hike in the park in winter unless they are experienced and properly equipped. The steep slopes of the valleys also contribute to the risk for avalanches.