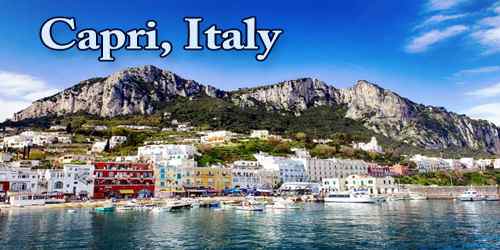 Capri (/kəˈpriː/ kə-PREE, also US: /ˈkɑːpri, ˈkæp-/ KA(H)P-ree, Italian: (ˈkaːpri) / Neapolitan: ˈkɑːpri), is an island in the Gulf of Naples just a few nautical miles from the Peninsula of Sorrento, to which it was once attached. The main town Capri that is located on the island shares the name. It has been a resort since the time of the Roman Republic. It lies opposite the Sorrento peninsula, to which it was joined in prehistoric times. The island is a single block of limestone 3.9 miles (6.25 km) long, with a maximum width of 1.8 miles and an area of 4 square miles (10 square km), rising to 1,932 feet (589 metres) at Monte Solaro in the west. Two indentations in its precipitous cliff-lined coast serve as landing places: the Marina Grande on the north shore, protected by a breakwater, and the open Marina Piccola on the south, used when the north wind is particularly strong.

Today, Capri is one of the most popular tourist destinations in the world, beloved for its dramatically craggy coastline, its sea caves tucked into the cliffs, and the glamorous yet informal feel of its island villages. Capri is an island of a thousand faces, where visitors can walk the trails skirting the cliffs above the Mediterranean in total solitude, dive into the crystalline waters of its rocky shore, or plunge into the vibrant crowds of the Piazzetta and shop in the most fashionable boutiques in the world.

Some of the main features of the island include the Marina Piccola (the little harbour), the Belvedere of Tragara (a high panoramic promenade lined with villas), the limestone crags called sea stacks that project above the sea (the faraglioni), the town of Anacapri, the Blue Grotto (Grotta Azzurra), the ruins of the Imperial Roman villas, and the various towns surrounding the Island of Capri including Positano, Amalfi, Ravello, Sorrento, Nerano, and Naples. 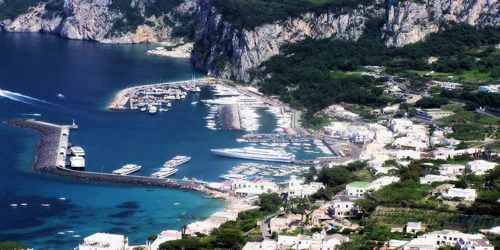 Capri is part of the region of Campania, Metropolitan City of Naples. The town of Capri is a comune and the island’s main population center. The island has two harbors, Marina Piccola and Marina Grande (the main port of the island). The separate comune of Anacapri is located high on the hills to the west.

The Island of Capri is divided into three areas: Marina Grande, where the marina and port are located, Capri, with the Piazzetta at its center, and Anacapri, the highest village on the island. The centers of both the towns of Capri and Anacapri are closed to traffic; there is a single road open to traffic which runs from the Marina Grande port to Anacapri, with a secondary road branching off to Marina Piccola (on the southern coast), the Punta Carena lighthouse, and the area near the Blue Grotto.

The etymology of the name Capri is unclear; it might be traced back to the Ancient Greeks (Ancient Greek κάπρος kapros meaning “wild boar”), the first recorded colonists to populate the island. But it could also derive from Latin capreae (goats). Fossils of wild boars have been discovered, lending credence to the “kapros” etymology; on the other hand, the Romans called Capri “goat island”. Finally, there is also the possibility that the name derives from an Etruscan word for “rocky”, though any historical Etruscan rule of the island is disputed.

Capri consists of limestone and sandstone rock; cliffs form much of the sides and surface of the island.

Inhabited in prehistoric times, the island later became a Greek colony and then a resort (Capreae) of emperors in the early years of the Roman Empire. The emperor Augustus resided there, and Tiberius built several villas, one of which, the Villa Iovis on the island’s northeastern tip overlooking Naples, has been excavated. During the 10th century the population, fearing pirate raids, moved from seaside settlements to the present towns, Capri (east) and Anacapri (west), high above the shore. Until a carriage road was built in the 19th century between Capri and Anacapri, the latter could only be reached from the sea by a flight of 800 steps called the Scala Fenicia (Phoenician Stairs).

In the Middle Ages Capri belonged to the Abbey of Montecassino and to the republic of Amalfi before passing to the Kingdom of Naples. It changed hands between the French and the British several times during the Napoleonic Wars, before being returned to the Kingdom of the Two Sicilies in 1813. Stone artifacts have been found in one of the caves with which the rocky shores of Capri abound; the most notable of these is the Blue Grotto (Grotta Azzurra), rediscovered in 1826 and accessible only by boat. Sunlight entering through the water that fills most of the entrance gives it an extraordinary blue light, whence its name. There are ruins of two medieval castles, the Castello di Barbarossa and the Castiglione, and the oldest church (10th–11th centuries) is that of St. Costanzo, the island’s patron saint. The Villa San Michele, built by the Swedish writer Axel Munthe, is on the site of a Tiberian villa.

The natural scientist Ignazio Cerio catalogued Capri’s flora and fauna during the 19th century. His work was continued by his son, author and engineer Edwin Cerio, who wrote several books on life in Capri in the 20th century. Prior to the First World War, the island was extremely popular with wealthy gay men. John Ellingham Brooks and Somerset Maugham shared a villa there.

In 1908, Lenin was hosted by Maxim Gorky, the Russian author, at his house near the Giardini Augusto. In 1970, a monument by Giacomo Manzù was erected during the centennial celebration in Lenin’s honor.

Today, Capri has become more of a resort and is visited by tourists during the summer months of July and August.

The name of the island has two possible origins, either capra (“goat”) or kapros (“wild boar”). There are fine bathing beaches and numerous hotels and villas, and Capri is connected with Naples and Sorrento by frequent steamer and hydrofoil services. Besides tourism, agriculture (vineyards, olives, citrus fruits) and fishing are carried on. An undersea aqueduct bringing fresh water from the mainland to support all these activities was completed in 1978. 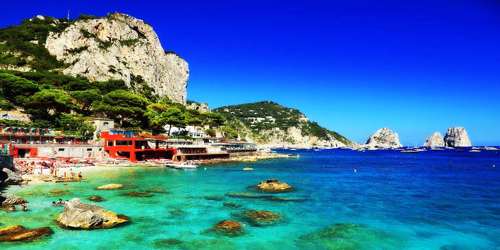 Glamorous Capri, about 20 kilometers off the Amalfi Coast, lives up to all the hype. Sea stacks and soaring cliffs rise from the teal-hued Tyrrhenian Sea framed by sprays of colorful flowers. A popular attraction is the blue grotto, a glowing sea cave, where locals row tourists in on tiny boats and sing opera to demonstrate the acoustics.

Capri has twelve churches, seven museums, and several monuments. The most visited attraction in Capri is the Grotta Azzurra (Blue Grotto), a cave discovered in the 19th century by foreign tourists. On one side of the grotto are the remains of ancient Roman rock, with a narrow cavern. As of 2018, there were plans to limit access, today tourists. The international luxury linen clothing brand 100% Capri opened its first boutique in the main town of Capri in 2000.

Once the visitor arrives at the port of Marina Grande, catch the funicular up to the main town of Capri, which feels like a movie set. The piazza here buzzes with impeccably-dressed locals and tourists toting shopping bags filled with designer clothes and the island’s perfumes. While visitors are here, be sure to also visit the highest town, Anacapri, and take the chair lift up to Monte Solaro for spectacular views across the island and sea.