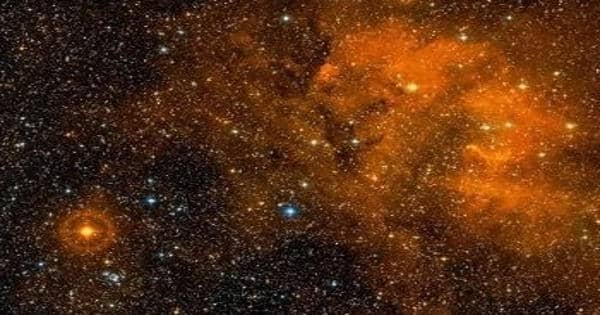 RW Cephei – an orange hypergiant star in the Cepheus constellation

RW Cephei is an orange hypergiant star in the Cepheus constellation. It is a very luminous Supergiant Star-type star. It is a hypergiant variable star in the constellation Cepheus, at the edge of the Sharpless 132 HII region and close to the small open cluster Berkeley 94. It is among the largest known stars with a diameter between 981 to 1,758 times larger than the Sun. It is not part of the Cepheus constellation outline but is within the borders of the constellation. One of the largest stars known, RW Cephei’s radius is more than 1,000 times that of the Sun (R☉), thus larger than the orbit of Jupiter. The star can be seen with the naked eye, that is, you don’t need a telescope/binoculars to see it.

RW Cephei is also a semi-regular variable star of type SRd, meaning that it is a slowly varying yellow giant or supergiant. It is a G8IAVAR supergiant star based on the spectral type that was recorded in the Hipparcos star catalogue. The visual magnitude range is from 6.0 to 7.3, while the photographic range is from 8.6 – 10.7. The General Catalogue of Variable Stars gives a period of approximately 346 days, but other studies suggest different periods and certainly no strong periodicity.

The spectral has been classified as early as G8 and as late as M2, but it isn’t clear that there has been actual variation. Based on the spectral type (G8Iavar) of the star, the star’s color is yellow. Based on the same spectra it was adjusted to the standard star for type K2 0-Ia. Molecular bands characteristic of M-class stars are seen in infrared spectra, but not always in optical spectra. The temperature is equally uncertain, with contradictory excitation strengths in the spectrum. A simple color correlation temperature fit gives temperatures around 3,749 K, while a full spectrum fit gives a temperature of 5,018 K.

RW Cephei estimated radius has been calculated as being 3,865.72 times bigger than the Sun. The distance to RW Cephei has been estimated on the basis of its spectroscopic luminosity and is assumed to be a member of the Cepheus OB1 association at 3,500 parsecs, consistent with the parallax from Gaia Data Release 2. The Sun’s radius is 695,800km, therefore the star’s radius is an estimated 2,689,769,264.59.km.

The temperature intermediate between the red supergiants and yellow hypergiants, and itself varying considerably, has led to it being variously considered as a red hypergiant or yellow hypergiant. RW Cephei has an apparent magnitude of 6.44 which is how bright we see the star from Earth.