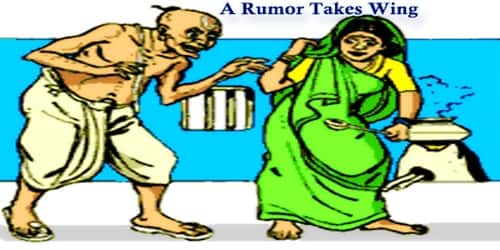 Once upon a time, there lived a pundit. One day, he was crossing a field on his way home. As he walked, he suddenly felt something stuck in his throat and started to cough. The object came up to his mouth. “Oh god! What on earth is in my mouth!” he thought. He was finally able to spit it out. “Why it’s a heron’s feather!” he thought, amazed. He could not understand how it had come out of his mouth. “I just cannot imagine how this happened!” he pondered as he walked. He soon reached home and told his wife about it. “The strangest thing happened to me today. A heron’s feather came out of my mouth!” he told her. His wife was as puzzled as he was. “It doesn’t make any sense!” she said. “Do you tell anyone about it,” warned the pundit. “People might think it’s a bad omen or something.” His wife agreed but soon the desire to confide in someone became too great. “I just have to tell someone or I’ll burst! I’ll go see if the neighbor is home!” So, she went next door. “I have something to tell you,” she said in a low voice.

The neighbor was all ears. “Tell me, tell me!”

The wife told her the whole story. Perhaps, it was the way she told it, but the neighbor got the impression that several feathers had come out of the pundit’s mouth. “That’s incredible!” “Promise me you won’t tell anyone,” begged the pundit’s wife. “We are worried enough as it is!” “My lips are sealed!” promised the neighbor. “You don’t worry about it though. Such things happen to people all the time. I’m sure it’s nothing.”

The neighbor was thrilled by the story. “I have to tell someone!” she thought. As she was finishing her household chores, the dhobi’s wife passed by. “Hello! Come here! I have something to tell you!” said the neighbor woman. “What is it?” asked the dhobi’s wife.

“Did you hear what happened to the priest?” said the neighbor, and she told the story with such enthusiasm that it sounded like a whole heron had come out of the priest’s mouth!

“Oh my God!” said the dhobi’s wife. “It is unbelievable! Especially since the pundit is a vegetarian and all! You can never tell…..”

Although sworn to secrecy, the dhobi’s wife told her friend, that ‘herons’ had come out of the pundit’s mouth. The friend told her husband that it was a ‘flock of herons’.

The story spread and changed to ‘hundreds of birds of different sizes’! Huge crowds thronged to the pundit’s house to see this miracle. “No bird came out of my mouth!” insisted the pundit. However, no one listened.

Finally, the priest ran out the back way into the forest and hid there. After several days people grew tired of waiting. “I guess the story was false after all,” they said and left.