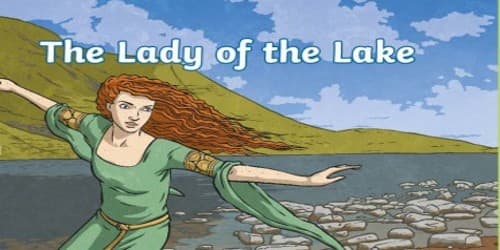 The Lady of the Lake

The Lady of the Lake (A Welsh Tale)

Long ago a lonely shepherd lived on a farm near Myddvai. One day the shepherd led his sheep into the Black Mountains to graze. As they nibbled the new spring grass, the shepherd gazed into a lake and daydreamed. Suddenly his heart began to pound, and he could not believe the sight before his eyes. A woman more beautiful than any he had ever seen was sitting on a rock singing a song. “I am dreaming,” the shepherd said aloud, “because I wish so to find someone to love.”

Believing he was dreaming, he walked to the edge of the lake, holding out his loaf of bread to the woman on the rock. “Will you share my supper?” the shepherd asked.

The woman laughed as she glided across the water toward him, and her laughter sounded like music. “Hard-baked is your bread/With that I’ll ne’er be fed,” she said, and dived into the lake and disappeared.

The next morning the shepherd made a loaf of bread and baked it until it was firm outside but soft and doughy inside. He returned to the lake and waited for the woman to appear. When he heard her song, he ran toward her, offering his bread.

Again she laughed. “Unbaked is thy bread/With that, I’ll ne’er be fed.” Once more she disappeared under the water.

By the third day, the shepherd understood that the woman he loved was a gwraig annwm, a water sprite. He baked fine white bread until it was just golden, and that evening he ran once more to the pool and offered the woman his meager fare.

This time she smiled, and her smile was so lovely, the shepherd’s heart swelled.

“True baked is thy bread/With that I will be wed,” she said, and stood upon her rock and looked down at the water. “Un dai tri pedway pump … one, two, three, four, five,” she said.

“What are you saying?” the shepherd asked.

The woman looked shyly at him. “I have called my dowry,” she answered, and just as she spoke, the waters parted and from the pool came seven cows and two beautiful stallions, glistening from the water. The animals climbed onto the bank, and the lady took the shepherd’s hand. “Shepherd, I will stay and love you forever, or until the day you give me three blows without cause. If that day ever comes, I will leave you forever.”

The shepherd knew he would never strike this wondrous woman, for he loved her with all his heart. And so they were wed and went together to live on the farm. The lambs and cows and horses thrived, and soon the shepherd and his wife were prosperous. As the years passed, they had three sons who brought them great joy.

One day the shepherd and his wife were invited to attend a christening. After they had walked some distance on foot, she realized she had forgotten her gloves. “Fetch the horse from the field and bring me my gloves,” the shepherd’s wife said.

When he returned on horseback with the gloves, he saw that his wife had not moved. She stood as if she were entranced, and so the shepherd reached down and tapped her shoulder. “Dos, dos,” he said. “Go, go.”

His wife looked sternly at him. “That’s one,” she said.

The shepherd was alarmed. So that is what she meant by a blow without cause, he thought. He vowed never to touch her in anger again.

Time passed. One day the shepherd and his wife attended a wedding. At the ball, the shepherd’s wife suddenly began to weep. “My dearest,” the shepherd said, tapping her shoulder, “do not cry at this joyous event.”

“That’s two,” she said, “and so you know I weep because these two may enter into trouble as you and I have done. Please do not end our happiness by striking me a third time.”

Alas, though the shepherd’s intentions were good, human memory does not last forever. Months later, while they were attending a funeral, the shepherd’s wife began to laugh aloud. The shepherd felt ashamed and tapped his wife’s shoulder. “Why do you laugh at such a time of sorrow?” he asked.

“Ah,” the woman said, “I laugh because this man’s troubles are over forever, and, my dearest husband, our marriage is also over. Farewell.”

She ran to the farm, and the shepherd chased her there. When he arrived, he saw that she was calling to the animals. “Come home! Yn lach adre!” she cried, and from every corner of the fields and barns, the animals came to her call. She led them to the lake in the Black Mountains, the horses still pulling the plow they were harnessed to. The plow caused the earth to furrow and heave, just as the shepherd’s heart heaved.

With a great splash, the lady and all the animals dived into the lake and disappeared.

The shepherd fell to his knees and wept so that his tears spilled like raindrops into the lake. “I have lost everything I love,” he cried, “because I did not keep my promise.”

But Cadogan, Einion and Gryffydd, the shepherd’s sons, did not lose hope. Every day they visited the lake, and one day they saw the water begin to ripple. Suddenly their mother appeared.

“You have great work to do in this world,” she told her sons. “You will heal the sick.” She handed them a magic box filled with the recipes for every cure known to the water sprites. The three young men became great physicians known everywhere as the Doctors of Myddvai, and their sons and grandsons became great healers, too. They knew the power of the water sprites, and they remembered the power of a promise.