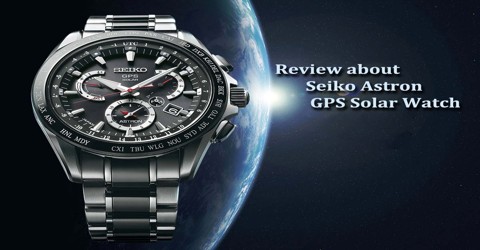 The Seiko Astron differs from watches that receive terrestrial radio signals from atomic clocks. So-called RC (radio-controlled) watches receive signals when they are within range of stations in the United States, Japan, the United Kingdom, Germany and China, so they do not offer global coverage. The Astron works anywhere, even in the middle of an ocean or desert, in Antarctica, or on a Tibetan mountaintop. Seiko Astron watches also automatically recognizes which time zone they are in, while RC watches do not.

It’s the first full production GPS timed watch ever made, and the only one that can automatically compensate for time zone changes.

The history of Seiko is the story of innovation. Thanks to a continuous stream of industry-leading innovations over the decades, Seiko established and has maintained, its position as a world leader in the technology of time.

On December 25, 1969, Seiko marketed the world’s first quartz watch, the Seiko Quartz Astron, and subsequently opened the patents to the world. With the delivery of this powerful statement, as a result, Seiko set the global standard, and today, most quartz watches use the system Seiko developed. For Seiko, the story of quartz is still only just beginning. Thanks to Seiko’s relentless drive for innovation, new possibilities in watch technology continue to open up as the new Seiko Astron, the world’s first GPS solar watch, so dramatically demonstrates.

Seiko has, once again, pushed back the boundaries of what a watch can deliver and has set a new world standard in electronic watchmaking.

The progress of Astron never stops. Astron has continued to pursue “the ultimate wristwatch.

Sun and the Global Positioning System

In an ordinary quartz watch, the power bank is a removable battery which upon losing all the energy needs to be replaced – and this usually happens every few years. Astron stores its power in a small solar-powered accumulator, charged through special panels on the watch face. When fully charged, the watch can keep on ticking for half a year and even after being charged for ten minutes the battery allows the watch to function for a complete day. Full recharging requires about 50 hours of exposure to sunlight. The second, more vital, element of the new Astron is the GPS receiver – a real novelty in a wristwatch. The case contains a module which receives the signal of the GPS satellites orbiting around the globe and adjusts the displayed time. The adjustment process is initiated by pressing and holding the 10 o-clock button; afterwards the user needs to lift the watch with its face towards the sky and wait for about a minute so that the signal of at least four GPS satellites can be received and the time. If needed, the date will also be adjusted. As an added bonus, Daylight Saving Time (DST) can be activated. The GPS and time auto-correction are especially useful if the owner travels across time zones frequently. The 8x is also a step forward in the design of the timepiece. It is noticeably smaller, with a 44.6mm diameter and 13.3mm height. The dial is a monochrome composition of the abovementioned luminous indexes, a minute ring with a UTC time zone scale, a date window framed in steel and three small dials. A few variants of the timepiece will be available – the test one was produced of lightweight titanium with a black ceramic bezel, sapphire glass, titanium bracelet whose links are polished and satin-brushed, with two-button folding clasp. The bracelet wears comfortably, but the design is somewhat outside my taste – again, the 7x version had much more appeal when my preferences are concerned.

When GPS signals are received, the second hand starts moving, indicates the number of satellites, and then displays the current time. It is an emotional moment, feeling an identification with GPS satellites 20000km away. An exclusive Seiko ring antenna placed under the dial ring is suitable for automatic reception as it can easily receive signals regardless of posture.