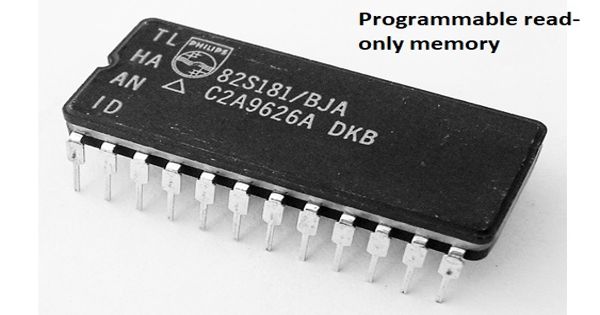 A programmable read-only memory (PROM) is a form of digital memory where the setting of each bit is locked by a fuse or anti-fuse. It is a computer memory chip that can be programmed once after it is created. It is first prepared as blank memory, and then it is programmed to store the information. Once a program has been written onto a PROM, it remains there forever. Unlike RAM, PROMs retain their contents when the computer is turned off.

Programmable read-only memory (PROM) is a type of ROM that is programmed after the memory is constructed. They provide a simple means of programming electronic devices.

It is one type of ROM (read-only memory). Once the PROM is programmed, the information written is permanent and cannot be erased or deleted. The data in them are permanent and cannot be changed. PROM was first developed by Wen Tsing Chow in 1956. PROMs are used in digital electronic devices to store permanent data, usually low-level programs such as firmware or microcode. An example of a PROM is a computer BIOS in early computers.

The key difference from a standard ROM is that the data is written into a ROM during manufacture, while with a PROM the data is programmed into them after manufacture. When the PROM is created, all bits read as “1.” Thus, ROMs tend to be used only for large production runs with well-verified data, while PROMs are used to allow companies to test on a subset of the devices in order before burning data into all of them. During the programming, any bit needing to be changed to a “0” is etched or burned into the chip using a gang programmer.

PROMs are manufactured blank and, depending on the technology, can be programmed at the wafer, final test, or in the system. If a PROM is programmed with an error or needs to be updated, the chip is discarded and a new PROM is created, replacing the old chip. To write data onto a PROM chip, you need a special device called a PROM programmer or PROM burner. Blank PROM chips are programmed by plugging them into a device called a PROM programmer. The process of programming a PROM is sometimes called burning the PROM.

To program the PROM, a PROM programmer or PROM burner is used. The availability of this technology allows companies to keep a supply of blank PROMs in stock, and program them at the last minute to avoid large volume commitment. The process of programming the PROM is called burning the PROM. Also, the data stored in it cannot be modified, so it is called a one–time programmable device.