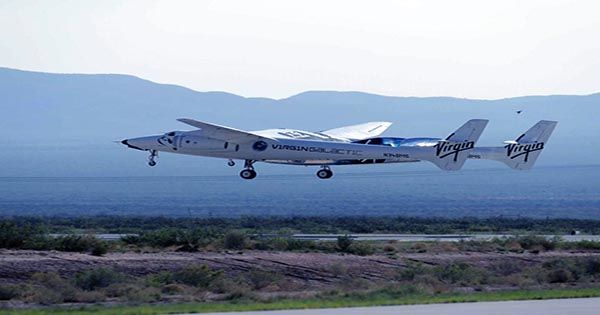 Virgin Galactic’s position in the billionaire space race appears to have stalled, and it is unlikely to fly again very soon. Virgin Galactic’s space flights have been banned by the US Federal Aviation Administration (FAA) until the agency reviews the company’s much-hyped July trip to the edge of space. On its way back to Spaceport America in New Mexico, the vehicle carrying Richard Branson strayed slightly from its scheduled trajectory.

“The FAA is leading the investigation into Virgin Galactic’s SpaceShipTwo crash on July 11 over Spaceport America, New Mexico,” the agency said in a brief statement.

“Virgin Galactic may not fly the SpaceShipTwo until the FAA approves the final incident investigation report or concludes that the concerns surrounding the mishap do not endanger public safety.” According to Nicholas Schmidl of the New Yorker, a yellow warning light appeared about a minute into the rocket flight carrying Virgin CEO Richard Branson, indicating that the spaceship was not on the appropriate trajectory for returning to Earth in its allotted area. When the signal went red, the craft had to either undergo rapid remedial action or the mission would be terminated entirely.

The first option was chosen by the pilots. The Unity 22 spacecraft reached an altitude of 85 kilometers (52 miles) on that day, almost missing the Kármán line, the widely accepted edge of space set at an arbitrary 100 kilometers (62 miles) altitude. The team strayed outside their allotted airspace while attempting to adjust their trajectory, sparking the FAA investigation.

“Although the flight’s final trajectory differed from our original plan, Unity 22 was able to successfully reach orbit and land safely at our Spaceport in New Mexico thanks to a controlled and planned flight route.

“At no point was the safety of passengers or crew jeopardized as a result of this shift in trajectory, and the ship never traveled above any population areas or posed a public safety risk,” a company spokeswoman told TechCrunch.

The first commercial flight of the company was scheduled for late September or early October. It’s unclear whether the probe will be completed in time or if the flight will have to be rescheduled. If you’re looking for the next chapter in the billionaire space race, SpaceX’s first all-civilian space mission is set to launch on September 15, so get your popcorn ready and come back here.