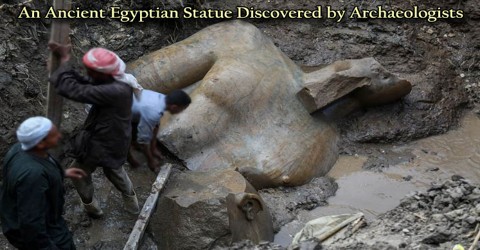 On Thursday (10th March 2017) Archaeologists from Egypt and Germany have discovered the remains of an ancient Egyptian statue they believe could depict one of history’s most famous rulers. The likeness of what may be Pharaoh Ramses II was found submerged in groundwater in a Cairo slum.

The 26-foot (8-meter) statue is made of quartzite and could be up to 3,000 years old. The Antiquities Ministry in Egypt is hailing the discovery as significant. The remains lack an inscription bearing the pharaoh’s name, but the discovery’s proximity to a temple devoted to Ramses suggest the statue is of his likeness, the ministry says. Archaeologists also recovered fragments of another statue believed to be of Ramses II’s grandson, Pharaoh Seti II, as well as an obelisk. Archaeologists will continue to extract the other parts of the statues for study and restoration. If the larger statue is determined to be of Ramses II, it will be installed at the Grand Egyptian Museum next year, according to The Guardian. This isn’t the first time that statues have been found in the area: in 2006, archaeologists discovered a four-ton statue believed to depict Ramses II in a marketplace.

The discovery was made by a joint effort between Egypt’s Ministry of Antiquities and researchers from the University of Leipzig. A rising water table, industrial waste, and piling rubble have made excavation of the ancient site difficult.

Third king of the 19th dynasty of Egypt, whose reign (1279-13 BC) was the second longest in Egyptian history. In addition to his wars with the Hittites and Libyans, he is known for his extensive building programs and for the many colossal statues of him found all over Egypt. Ramesses II (1279-1213 BCE, alternative spellings: Ramses, Rameses) was known to the Egyptians as Userma’atre’setepenre, which means ‘Keeper of Harmony and Balance, Strong in Right, Elect of Ra’. He is also known also as Ozymandias and as Ramesses the Great. He was the third pharaoh of the 19th Dynasty (1292-1186 BCE) who claimed to have won a decisive victory over the Hittites at The Battle of Kadesh and used this event to enhance his reputation as a great warrior. In reality, the battle was more of a draw than a decisive victory for either side but resulted in the world’s first known peace treaty in 1258 BCE. Although he is regularly associated with the pharaoh from the biblical Book of Exodus there is no historical or archaeological evidence for this whatsoever.

Ramesses lived to be ninety-six years old, had over 200 wives and concubines, ninety-six sons and sixty daughters, most of whom he outlived. So long was his reign that all of his subjects, when he died, had been born knowing Ramesses as pharaoh and there was widespread panic that the world would end with the death of their king. He had his name and accomplishments inscribed from one end of Egypt to the other and there is virtually no ancient site in Egypt which does not make mention of Ramesses the Great. Early in his life, Ramesses II embarked on numerous campaigns to restore possession of previously held territories lost to the Nubians and Hittites and to secure Egypt’s borders. He also was responsible for suppressing some Nubian revolts and carrying out a campaign in Libya. Although the Battle of Kadesh often dominates the scholarly view of the military prowess and power of Ramesses II, he nevertheless, enjoyed more than a few outright victories over the enemies of Egypt. During Ramesses II’s reign, the Egyptian army is estimated to have totaled about 100,000 men; a formidable force that he used to strengthen Egyptian influence.

Ramses was a chief worshiper of Re. He commissioned a number of temples in Heliopolis to be built for worshipping the sun god. It’s also believed Ramses II may have been the pharaoh from the biblical Book of Exodus from whom Moses demanded the release of his people.

By the time of his death, aged about 90 years, Ramesses was suffering from severe dental problems and was plagued by arthritis and hardening of the arteries. He had made Egypt rich from all the supplies and riches he had collected from other empires. He had outlived many of his wives and children and left great memorials all over Egypt. Nine more pharaohs took the name Ramesses in his honour. (The mummy of Ramesses II)

Ramesses II originally was buried in the tomb KV7 in the Valley of the Kings, but because of looting, priests later transferred the body to a holding area, re-wrapped it, and placed it inside the tomb of queen Inhapy. Seventy-two hours later it was again moved, to the tomb of the high priest Pinudjem II. All of this is recorded in hieroglyphics on the linen covering the body. His mummy is today in Cairo’s Egyptian Museum.

In 2006, archaeologists discovered one of the largest sun temples in Cairo under a marketplace. It was found to house a number of statues of Ramses II weighing as much as five tons. One such statue depicted the pharaoh seated and wearing a leopard’s skin, indicating that he might have served as a high priest of Re when the temple was built.

The artifacts were discovered in what was one of the oldest cities in ancient Egypt, Heliopolis, which contained a massive temple dedicated to the ruler. The city was known for its temples and historical records by the time Greece expanded its empire to encompass Egypt. However, it was eclipsed by the rise of neighboring cities Cairo and Alexandria, and its temples and statues were dismantled for raw materials.

In November last year (2016), Egyptian archeologists discovered a village and cemetery used by officials tasked with building royal tombs. The findings at the site some 250 miles (390 kilometres) south of Cairo included 15 large tombs dating back to the Early Dynastic Period, more than 4,500 years ago.