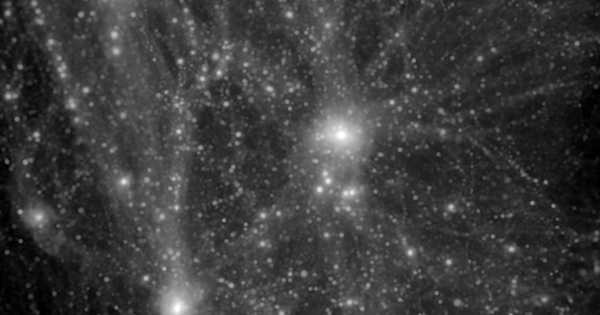 Physicists Probe the Nature of Dark Matter and Dark Energy

An analysis conducted by Dark Energy Survey physicists yields more precise estimates of the average density of matter as well as its proclivity to clump together – two key parameters that aid physicists in their investigation of the nature of dark matter and dark energy.

While no one knows why the universe is expanding at such a rapid pace, researchers with the Dark Energy Survey (DES) had a plan to figure it out: they would combine measurements of the distribution of matter, galaxies, and galaxy clusters to better understand what’s going on.

Reaching that goal proved difficult, but a team led by researchers from the Department of Energy’s SLAC National Accelerator Laboratory, Stanford University, and the University of Arizona has now devised a solution. Their research, which was published in Physical Review Letters on April 6, provides more precise estimates of the average density of matter as well as its propensity to clump together – two key parameters that help physicists investigate the nature of dark matter and dark energy, the mysterious substances that make up the vast majority of the universe.

“It is one of the best constraints from one of the best data sets to date,” says Chun-Hao To, a lead author on the new paper and a graduate student at SLAC and Stanford working with Risa Wechsler, director of the Kavli Institute for Particle Astrophysics and Cosmology.

An analysis by Dark Energy Survey physicists yields more precise estimates of the average density of matter as well as its propensity to clump together – two key parameters that help physicists probe the nature of dark matter and dark energy.

Ideally, scientists would combine all four data sources to improve their estimates, but there’s a catch: the distributions of matter, galaxies, and galaxy clusters are all intertwined. If researchers do not account for these relationships, they will end up “double counting,” putting too much weight on some data and not enough on others, according to To.

To avoid mishandling all of this data, To, University of Arizona astrophysicist Elisabeth Krause, and colleagues created a new model that can account for the connections in the distributions of all three quantities: matter, galaxies, and galaxy clusters. As a result, they were able to create the first-ever analysis that properly combined all of these disparate data sets in order to learn about dark matter and dark energy.

According to To, incorporating that model into the DES analysis has two effects. First, measurements of matter distributions, galaxies, and galaxy clusters tend to introduce various types of errors. By combining all three measurements, any such errors are easier to identify, making the analysis more robust. Second, the three measurements differ in their sensitivity to matter’s average density and clumpiness. As a result, combining all three can improve the DES’s ability to measure dark matter and dark energy with greater precision.

To, Krause, and colleagues applied their new methods to the first year of DES data in the new paper, sharpening the precision of previous estimates for matter’s density and clumpiness. Now that the team can include matter, galaxies, and galaxy clusters in their analysis at the same time, To believes that including supernova data will be relatively simple because it is not as closely related to the other three.

“The immediate next step,” he says, “is to apply the machinery to DES Year 3 data, which has three times the coverage of the sky.” This is not as simple as it sounds: while the basic idea is the same, To says the new data will necessitate additional efforts to improve the model to keep up with the higher quality of the newer data.

“This analysis is very exciting,” said Wechsler. “I expect it to set a new standard in the way we analyze data and learn about dark energy from large surveys, not only for DES but also for the incredible data that we will receive from the Vera Rubin Observatory’s Legacy Survey of Space and Time in a few years.”