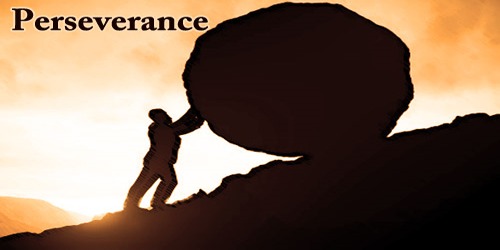 Perseverance In Our Life

Perseverance is a unique precondition to success in life. We can substantiate this fact when we look at the reality of life and the history of man’s success. Perseverance helps us do what we otherwise would consider impossible to do.

Virtually, there is nothing that man cannot do. Only what he has to do is to keep doing and doing without being demoralized. Success will come someday or other, though it may apparently be the conception about something that it cannot be done. The task that is easily done at the first attempt is undoubtedly very easy. But the reality is that man’s success depends on whether he can do the toughest tasks successfully. It is because our life is complicated and tough. And to succeed in this tough battle perseverance and hard work is a must. It is a unique precondition to success in life. We can substantiate this fact when we look at the reality of life and the history of man’s success. Perseverance helps us do what we otherwise would consider impossible to do.

Perseverance is the secret of success. Without it, no great achievement is possible. Even if a person is not very talented, nor highly knowledgeable, but of average merit, still he can succeed in life simply by his perseverance. Every action has its reaction. So hard labor has no alternative. It must yield results.

A person who is highly intelligent, and a scholarly genius, but is lethargic by nature, and reluctant to diligence, can hardly prosper in life, because he does not know how to use his brain and labor in the right direction. In this world, all the great things have been made or constructed only by perseverance.

What the world-famous scientist Sir Issac Newton had done by twelve years’ incessant hard-work was burnt out by his pet dog. But that could not demoralize him a little. He was able to do it again through years of hard work and perseverance. It is only for his undefeated perseverance that we have been able to have many inventions and discoveries.

Columbus has left us an adventurous story of perseverance. He went through thick and thin to reach his destination after months of the strenuous voyage on the sea. He discovered the way from Spain to America and offered the world a new route of communication with America. This outcome of his perseverance will be generated by the world forever.

The bold king of Scotland, Robert Bruce, has left us a thrilling example of perseverance. Once, after being defeated several times by the English, he was forced to hide in a temporary exile. But he in no way gave up the intention to beat back the English from his motherland. One day, while in deep meditation about how he could wage a successful war again, he found that a spider, having made attempts to make its web six times and failed, was eventually successful at the seventh attempt. On seeing this king learned a lesson. He applied that experience of the spider in his own life and was successful. He attacked the English for the seventh time and was able to defeat them and dominate his power on his motherland.

All the great men in history have written their names in golden letters by dint of perseverance. Their success will always remain as perfect examples to us.

In human life, perseverance plays a very important role. Modern science, architecture, literature, music-in every sphere of life-perseverance is the root cause of suc­cess and glory. Shakespeare did not compose such volumi­nous works just in a day. He had to work hard during days and nights with tremendous perseverance to create such great masterpieces. The modern scientists, too, carry on their experiments day and night for years together in order to attain success. If one looks at his own life, he can very well understand that whatever he has so far gained, he has gained it only by his hard labor, and not by chance or magic, or by someone’s grace.

Therefore, perseverance must be practiced from the very childhood so that the noble habit becomes a part and parcel of one’s life. With that great asset or goodwill, a man can walk easily on the hazardous road of his life’s journey; and success will be his and his only.

Moreover, in the modern world, there are competitions in education, economy, politics, science, and even friendship building. Therefore, whatever our goals are, the only means by which we can achieve them is perseverance. It is obvious that perseverance is needed not only at the individual level but also in the social and national levels. If we all are perseverant in whatever we do, we are sure to stand out as a successful nation in the near future.