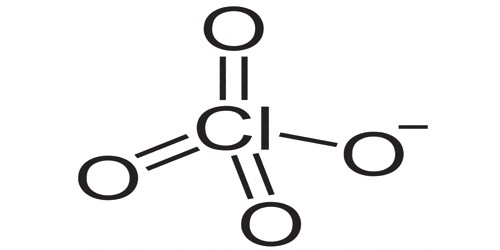 Perchlorate is an ion. Its chemical formula is ClO4-. It is a manufactured chemical and colorless salt that is most commonly used in rocket fuel. It contains chlorine in its +7 oxidation state. It is a negatively charged molecule made of one chlorine atom and four oxygen atoms. The majority of perchlorates are commercially produced salts. It occurs naturally in arid states in the Southwest United States, in nitrate fertilizer deposits in Chile, and in potash ore in the United States and Canada. It is a contaminant of emerging concern—,, especially in groundwater.

Perchlorate contamination in food, water, and other parts of the environment has been studied in the U.S. because of its harmful effects on human health. It reduces hormone production in the thyroid gland. It can disrupt the normal function of the thyroid gland in both children and adults. In fetuses and infants, thyroid hormones are critical for normal growth and development of the central nervous system.