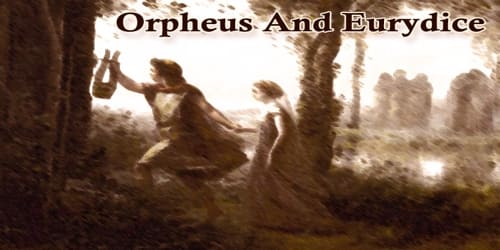 When gods and shepherds piped, and the stars sang, that was the day of musicians! But the triumph of Phoebus Apollo himself was not so wonderful as the triumph of a mortal man who lived on earth, though some say that he came of divine lineage. This was Orpheus, that best of harpers, who went with the Grecian heroes of the great ship Argo in search of the Golden Fleece.

After his return from the quest, he won Eurydice for his wife, and they were as happy as people can be who love each other and everyone else. The very wild beasts loved them, and the trees clustered about their home as if they were watered with music. But even the gods themselves were not always free from sorrow, and one-day misfortune came upon that harper Orpheus whom all men loved to honor.

Eurydice, his lovely wife, as she was wandering with the nymphs, unwittingly trod upon a serpent in the grass. Surely, if Orpheus had been with her, playing upon his lyre, no creature could have harmed her. But Orpheus came too late. She died of the sting and was lost to him in the Underworld.

For days he wandered from his home, singing the story of his loss and his despair to the helpless passers-by. His grief moved the very stones in the wilderness and roused dumb distress in the hearts of savage beasts. Even the gods on Mount Olympus gave ear, but they held no power over the darkness of Hades.

Wherever Orpheus wandered with his lyre, no one had the will to forbid him entrance; and at length, he found unguarded that very cave that leads to the Underworld, where Pluto rules the spirits of the dead. He went down without fear. The fire in his living heart found him away through the gloom of that place. He crossed the Styx, the black river that God’s name was their most sacred oath. Charon, the harsh old ferryman who takes the shades across, forgot to ask of him the coin that every soul must pay. For Orpheus sang. There in the Underworld, the song of Apollo would not have moved the poor ghosts so much. It would have amazed them, like a star far off that no one understands. But here was a human singer, and he sang of things that grow in every human heart, youth and love and death, the sweetness of the Earth, and the bitterness of losing aught that is dear to us.

Now the dead, when they go to the Underworld, drink of the pool of Lethe; and forgetfulness of all that has passed comes upon them like asleep, and they lose their longing for the world, they lose their memory of pain and live content with that cool twilight. But not the pool of Lethe itself could withstand the song of Orpheus, and in the hearts of the shades, all the old dreams awoke to wonder. They remembered once more the life of men on earth, the glory of the sun and moon, the sweetness of new grass, the warmth of their homes, all the old joy and grief that they had known. And they wept.

Even the Furies were moved to pity. Those, too, who were suffering punishment for evil deeds ceased to be tormented for them and grieved only for the innocent Orpheus who had lost Eurydice. Sisyphus, that fraudulent king (who is doomed to roll a monstrous boulder uphill forever), stopped to listen. The daughters of Danaus left off their task of drawing water in a sieve. Tantalus forgot hunger and thirst, though before his eyes hung magical fruits that were wont to vanish out of his grasp, and just beyond reach bubbled the water that was a torment to his ears; he did not hear it while Orpheus sang.

So, among a crowd of eager ghosts, Orpheus came, singing with all his heart, before the king and queen of Hades. And the queen Proserpina wept as she listened and grew homesick, remembering the fields of Enna and the growing of the wheat, and her own beautiful mother, Demeter. Then Pluto gave way.

They called Eurydice, and she came, like a young guest unused to the darkness of the Underworld. She was to return with Orpheus, but on one condition. If he turned to look at her once before they reached the upper air, he must lose her again and go back to the world alone.

Rapt with joy, the happy Orpheus hastened on the way, thinking only of Eurydice, who was following him. Past Lethe, across the Styx, they went, he and his lovely wife, still silent as a shade. But the place was full of gloom, the silence weighed upon him; he had not seen her for so long; her footsteps made no sound; and he could hardly believe the miracle, for Pluto seldom relents. When the first gleam of upper daylight broke through the cleft to the dismal world, he forgot all, save that he must know if she still followed. He turned to see her face, and the promise was broken!

She smiled at him forgivingly, but it was too late. He stretched out his arms to take her, but she faded from them, as the bright snow, that none may keep, melts in our very hands. A murmur of farewell came to his ears, no more. She was gone.

He would have followed, but Charon, now on guard, drove him back. Seven days he lingered there between the worlds of life and death, but after the broken promise, Hades would not listen to his song. Back to the earth, he wandered, though it was sweet to him no longer. He died young, singing to the last, and round about the place where his body rested, nightingales nested in the trees. His lyre was set among the stars; and he himself went down to join Eurydice, unforbidden.

Those two had no need of Lethe, for their life on earth had been wholly fair, and now that they are together they no longer own a sorrow.