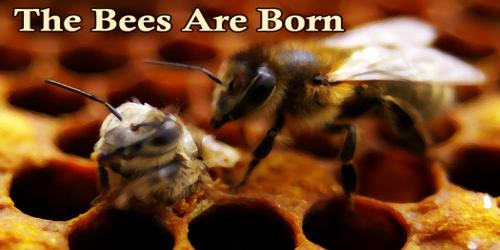 The Bees Are Born

Long ago, when the world was young, two villages sat on either side of a hill in the southern mountains of Spain. The people of the villages never climbed the hill. They lived separately and unaware of each other for many, many years.

One day an old wise man was hiking through the mountains to see what he might see. He was a curious man, and because he was wise, he knew he might always discover something he had never before seen.

Soon he came to the village that lay at the eastern foot of the hill. There he saw the villagers. They were dressed completely in yellow pants and yellow dresses, yellow hats and yellow shoes, yellow ribbons and yellow caps. Their flag was yellow, and their gardens brimmed with yellow flowers, and their houses and schools and cups and plates and paths were yellow, too. The people were singing and playing and dancing.

The old man stayed for a while and watched the villagers. Soon he discovered that every day in this village was a holiday, every moment a party. Everyone played all day long and late into the night. They sang and danced and laughed, and no one ever did a bit of work.

After several days the wise man asked the villagers if they were happy.

“Happy?” they asked. “What’s that? We’re too busy playing to wonder about such things.”

The wise man did not answer. Instead, he traveled to the west side of the hill. There he saw everyone dressed in black pants and black dresses, black hats and black shoes, black ribbons and black caps. Their flag was black, and their gardens were empty of flowers, black with soil, and their houses and schools and cups and plates and paths were black. The people were busy working, hammering and sawing and nailing and sweeping and cooking.

The wise man watched for a while and discovered that every day in this village was a workday, every minute a time meant for work. Everyone worked all day long and late into the night. They never played and never took a holiday.

After a few days the wise man asked the villagers if they were happy.

“Happy?” they asked. “What’s that? We’re too busy working to wonder about such things.”

The wise man walked to the top of the hill to think. He knew a great deal, and he knew magic words, and after he had sat and thought for many hours, he came up with a plan, for he wanted to teach these people about happiness.

He hurried to the village where the people wore black.

“Seors and seoras,” he called, “tomorrow morning I wish you to come to the top of the hill. There’s work to be done up there.”

At the mention of the word “work,” the people said, “Work? We’ll be there!”

Then the wise man hastened to the village where the yellow people danced and sang.

“Seors and seoras,” he called, “tomorrow morning I wish you to come to the top of the hill. I wish to throw a party for you!”

At the mention of the word “party,” the people said, “Party? We’ll be there!”

And the next morning, as the sun rose on the hilltop, the wise man waited for his visitors. Soon he heard voices singing. He turned to the east and saw the people in yellow climbing to the top of the hill. The next moment he heard the sound of heavy footsteps, and he turned to the west and saw the people in black climbing the hill. They carried tools.

The people in black shook their fists. “Lazy loafers!” they cried. “You’re worthless folks with all your play. We wish to work!”

The quarreling continued while the wise man watched, but after a while, he raised his arms and said, “People!” And then he spoke the most powerful magic words he knew, words no one today remembers for they have drifted away over time.

Suddenly the people in yellow were striped, black and yellow, and the people in black were striped, yellow and black. No one wanted to work all the time. No one wanted to play night and day. Instead, they all agreed that when the sun was high, they would plow their fields and work their gardens and build houses and sweep and dust and cook, and when the sun set, they would sing and dance and play by the light of the shining lanterns.

“Are you happy?” the wise man asked. “Yes!” the people said. “We love our work, and we love our play.” They returned to their villages and continued to work and to play. Decades passed. But after a while, the people began to grow smaller as the magic drifted away. They moved out of their villages and into small mounds in the mountains, and they turned into the creatures we call bees today.

Until the wise man said his magic words, there were no bees in the world, but after that day on the hilltop, the world swarmed with bees, those beautiful striped creatures who know how to combine work with joy.