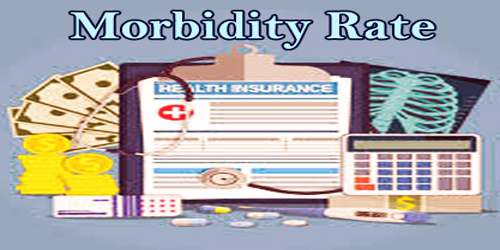 The morbidity rate is an evaluation of the occurrence of an incident that makes it known or happens in a given population. In actuarial industries, such as health insurance, life insurance, and long-term care insurance, morbidity rates are used to calculate premiums to be charged to clients. It measures the proportion of people who have contracted a particular disease over a given period of time in a particular geographical area. The morbidity rate should not be confused with the mortality rate, which in a given population is the frequency of death.

In fact, morbidity refers to the state of becoming sick or unhealthy; it encompasses the conditions of injury, sickness, and disability. The condition can be either acute (for example, heart attack) or chronic (for example, cancer). The Centers for Disease Control and Prevention (CDC) describes morbidity as “any deviation from a state of physiological or psychological well-being, subjective or objective.” The morbidity rate is shown as a percentage. it’s calculated by dividing the quantity of cases of a disease, injury, or disability by the overall population during a selected fundamental measure, as shown below: 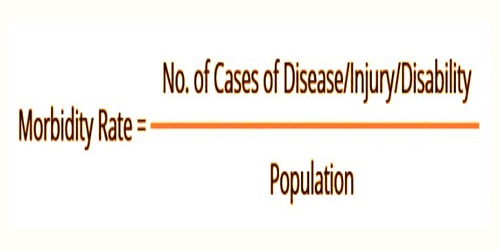 Morbidity includes “disease, illness, and impairment” in functional terms. Morbidity rates often apply to either frequency or prevalence. For instance, 10,000 people suffer from a specific illness in a city with a population of 2 million in one year. Therefore, the morbidity incidence of the disease in that year was 0.5 percent (10,000/2,000,000).

Sanitary conditions, healthcare costs, climate conditions, and lots of other factors can impact morbidity rates. Thus, over various time periods, the morbidity rate of a certain disease differs in different geographical areas. The proportion of initial disease cases per population is the rate of occurrence, while the proportion of initial and current disease cases per population is known as the rate of prevalence.

For example, in a city with a population of 5 million in one year, 50,000 new cases of heart disease have developed; the incidence rate (morbidity) is 1 percent. The prevalence rate increases from 5 % to 6% if 250,000 individuals are already suffering from heart disease in the city.

The morbidity rate is employed not just for healthcare purposes but also used within the insurance industry by actuarial professionals. Incidence is that the rate at which a disease or event occurs or develops within a given population in a very defined fundamental measure. It does not answer the precise cause or forecast an individual’s trajectory of the disease. The higher the rate of occurrence, the further the illness spreads. The incidence rate is determined by dividing a population by the number of initial cases. The number of new cases found during a given time span is the numerator for measuring incidence. This is divided by the denominator, which is that the number of individuals in danger within the same fundamental measure.

For insurers to set aside enough funds to cover premiums and premiums for their clients, the ability to accurately predict morbidity rates for different diseases is significant. According to the insurance contract, the insurance companies may have to fully or partially cover the medical expenses of the company for such illnesses and accidents. Morbidity rate data is additionally utilized in part to ascertain prices for the premiums that the insurance companies charge. Additionally to the morbidity rate, the death rate is another major factor that LTC, health, and life assurance providers keep an eye fixed on.