Chemotherapy is effective in treating many types of cancer, but the side effects can be devastating to the rest of the body. Drugs delivered directly to cancer cells may help alleviate these unpleasant symptoms. In a proof-of-concept study published in ACS Nano, researchers created fish-shaped microrobots that are guided with magnets to cancer cells, where a pH change causes them to open their mouths and release their chemotherapy cargo.

Direct delivery of drugs to cancer cells may help reduce the unpleasant side effects of chemotherapy. Researchers have created shape-morphing microrobots that can be guided to cancer cells using magnets, according to a paper published in ACS Nano. Headline Science from the American Chemical Society reveals how these devices travel and release their chemotherapy cargo.

Scientists have previously created microscale (less than 100 m) robots that can manipulate tiny objects, but most of them are incapable of changing shapes to perform complex tasks such as drug release. Some groups have created 4D-printed objects (3D-printed devices that change shape in response to certain stimuli), but they typically only perform simple actions and cannot be controlled remotely. Jiawen Li, Li Zhang, Dong Wu, and colleagues wanted to develop shape-morphing microrobots that could be guided by magnets to specific sites to deliver treatments as the first step toward biomedical applications for these devices. Because tumors exist in acidic microenvironments, the researchers decided to modify the shape of the microrobots in response to pH changes.

Direct delivery of chemotherapy drugs to cancers could help reduce side effects, and tiny 3D-printed robotic animals could soon do the job. Researchers created fish-shaped microrobots that are guided with magnets to cancer cells, where a pH change causes them to open their mouths and release their chemotherapy cargo.

Direct delivery of chemotherapy drugs to cancers could help reduce side effects, and tiny 3D-printed robotic animals could soon do the job. Magnets guide these microrobots, and they only release their drug payload when they come into contact with the acidic environment surrounding a tumor.

The new microrobots are made of hydrogel that has been 3D printed into the shape of various animals such as a fish, a crab, and a butterfly, with voids that can carry particles. The team changed the printing density in specific areas, such as the edges of the crab’s claws or the fish’s mouth, so that they could open and close in response to acidity changes. Finally, to make the microrobots magnetic, they were immersed in a solution containing iron oxide nanoparticles.

Using a pH-responsive hydrogel, the researchers 4D printed microrobots in the shape of a crab, butterfly, or fish. The team encoded pH-responsive shape morphing by adjusting the printing density at specific areas of the shape, such as the edges of the crab’s claws or the butterfly’s wings. The microrobots were then made magnetic by immersing them in a suspension of iron oxide nanoparticles.

Several tests were conducted by the researchers to demonstrate the microrobots’ various capabilities. A fish-shaped microrobot, for example, had an adjustable “mouth” that opened and closed. The researchers demonstrated that they could direct the fish through simulated blood vessels to cancer cells in a specific region of a petri dish. When the pH of the surrounding solution was reduced, the fish opened its mouth and released a chemotherapy drug, which killed nearby cells. Although this study is a promising proof of concept, the microrobots need to be made even smaller to navigate actual blood vessels, and a suitable imaging method to track their movements in the body needs to be identified, according to the researchers.

The end result was microrobots that could be loaded with drug nanoparticles and magnetically guided to a target location, where they would automatically release their payload due to changes in pH levels.

In laboratory tests, the researchers used magnets to guide a fish microrobot through simulated blood vessels, eventually arriving at a cluster of cancer cells at one end. In that case, the team slightly acidified the solution, and the fish opened its mouth and spat out the drugs on cue, killing the cancer cells. Crab microrobots could be programmed to grasp drug nanoparticles with their claws, scurry to a specific location, and release them.

Swarms of microrobots could soon be swimming, rolling, crawling, walking, squirming, and somersaulting through our bodies to deliver drugs more directly, according to recent research. However, the new designs appear to be especially promising due to their ability to automatically release drugs where they are needed.

Of course, the microrobots aren’t yet ready to swim through your veins. According to the team, they must be made smaller, and a method to image and track them through the body must also be developed. 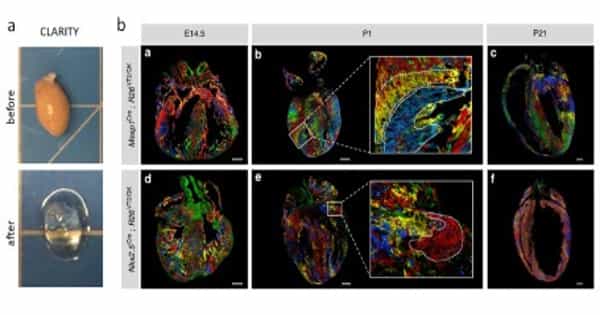 The Optical Tissue Clearing Method for Cancer Diagnosis is being improved

Types of Cells in Human Body and Functions