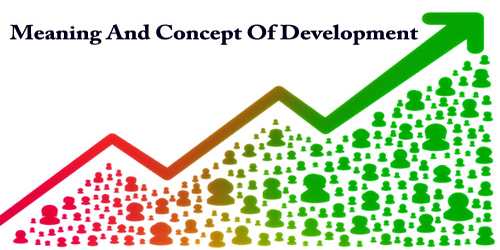 Development means “improvement in a country’s economic and social conditions”. More specifically, it refers to improvements in the way of managing an area’s natural and human resources. In order to create wealth and improve people’s lives.

The concept of development includes many aspects and has changed over time.

“Development is one of the main priorities of the United Nations. Development is a multidimensional undertaking to achieve a higher quality of life for all people. Economic development, social development, and environmental protection are interdependent and mutually reinforcing components of sustainable development.”

“Sustained economic growth is essential to the economic and social development of all countries, in particular developing countries. Through such growth, which should be broadly based so as to benefit all people, countries will be able to improve the standards of living of their people through the eradication of poverty, hunger, disease, and illiteracy, the provision of adequate shelter and secure employment for all and the preservation of the integrity of the environment.”

“Democracy, respect for all human rights and fundamental freedoms, including the right to development, transparent and accountable governance and administration in all sectors of society, and effective participation by civil society are also an essential part of the necessary foundations for the realization of social and people-centered sustainable development.”

“The empowerment of women and their full participation on the basis of equality in all spheres of society is fundamental for development.”

Development theory is a collection of theories about how desirable change in society is best achieved. Such theories draw on a variety of social science disciplines and approaches. Modernization theory is used to analyze the processes in which modernization in societies takes place. The theory looks at which aspects of countries are beneficial and which constitute obstacles for economic development. The idea is that development assistance targeted at those particular aspects can lead to the modernization of ‘traditional’ or ‘backward’ societies. Scientists from various research disciplines have contributed to modernization theory.

The term development does not refer to one single phenomenon or activity nor does it mean a general process of social change. All societies, rural and urban, are changing all the time. This change affects, for example, the society’s norms and values, its institutions, its methods of production, the attitudes of its people, and the way in which it distributes its resources. A rural society’s people, customs, and practices are never static but are continually evolving into new and different forms. There are different theories which seek to explain this process of social change (as evolution, as a cultural adaptation or even as the resolution of conflicting interests) and examples of each explanation can be found in different parts of the world.

Development is more closely associated with some form of action or intervention to influence the entire process of social change. It is a dynamic concept which suggests a change in, or a movement away from, a previous situation. All societies are changing, and rural extension attempts to develop certain aspects of society in order to influence the nature and speed of the change. In the past few decades, different nations have been studied and their level of development has been determined; this has given rise to the use of terms such as developed as opposed to developing nations. In other words, it is assumed that some nations have advanced or changed more than others, and indeed these nations are often used as the model for other, developing, nations to follow.

The people are held to be the principal actors in human-scale development. Respecting the diversity of the people as well as the autonomy of the spaces in which they must act converts the present-day object person to a subject person in the human scale development. The development of the variety that we have experienced has largely been a top-down approach where there is little possibility of popular participation and decision making.

This process of development can take different forms and have a variety of objectives. The following statements illustrate this:

Development involves the introduction of new ideas into a social system in order to produce higher per caput incomes and levels of living through modern production methods and improved social organization.

Development implies a total transformation of a traditional or pre-modern society into types of technology and associated social organization that characterize the advanced stable nations of the Western world.

Development is building up the people so that they can build a future for themselves. Development is an experience of freedom in deciding what people choose to do. To decide to do something brings dignity and self-respect. Development efforts, therefore, start with the people’s potential and proceed to their enhancement and growth.

Social and Human Development, therefore necessarily requires a unified approach, integrating the economic and social components in plans, policies, and programs for people’s betterment. The challenge is to simultaneously integrate cross-sectoral and regional developmental needs as well as to make for a participative development. The issues of environment, pollution, women, habitat, hunger, and employment have come to the fore one by one and continue to require public and institutional attention along with resource allocations. Two major contemporary concerns that require focus in any development initiative are that of human security and sustainability.