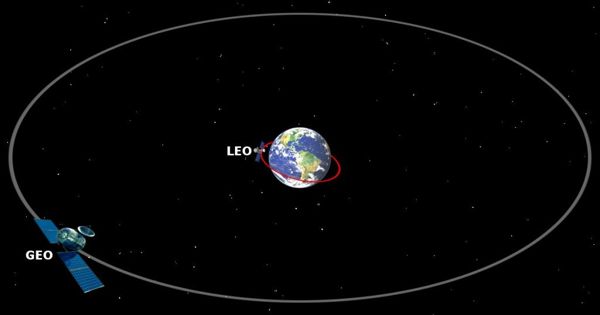 A low Earth orbit (LEO) is, as the name suggests, an orbit that is relatively close to Earth’s surface. It is an Earth-centred orbit with an altitude of 2,000 km (1,200 mi) or less (approximately one-third of the radius of Earth), or with at least 11.25 periods per day (an orbital period of 128 minutes or less) and an eccentricity less than 0.25. It is normally at an altitude of less than 1000 km but could be as low as 160 km above Earth – which is low compared to other orbits but still very far above Earth’s surface. Most of the artificial objects in outer space are in LEO.

There is a large variety of other sources that define LEO in terms of altitude. The altitude of an object in an elliptic orbit can vary significantly along the orbit. By comparison, most commercial airplanes do not fly at altitudes much greater than approximately 14 km, so even the lowest LEO is more than ten times higher than that. Even for circular orbits, the altitude above ground can vary by as much as 30 km (19 mi) (especially for polar orbits) due to the oblateness of Earth’s spheroid figure and local topography. Most of the LEO satellites are used for Earth or space observation and science. The best examples of LEO satellites are the Hubble space telescope, the Spot family of satellites, and military observation satellites. 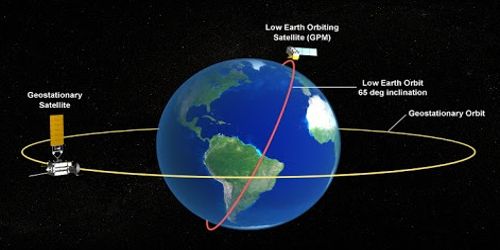 LEO’s close proximity to Earth makes it useful for several reasons. While definitions based on altitude are inherently ambiguous, most of them fall within the range specified by an orbit period of 128 minutes because, according to Kepler’s third law, this corresponds to a semi-major axis of 8,413 km (5,228 mi). It is the orbit most commonly used for satellite imaging, as being near the surface allows it to take images of higher resolution.

Instead, communications satellites in LEO often work as part of a large combination or constellation, of multiple satellites to give constant coverage. For circular orbits, this, in turn, corresponds to an altitude of 2,042 km (1,269 mi) above the mean radius of Earth, which is consistent with some of the upper altitude limits in some LEO definitions. In order to increase coverage, sometimes constellations like this, consisting of several of the same or similar satellites, are launched together to create a ‘net’ around Earth.