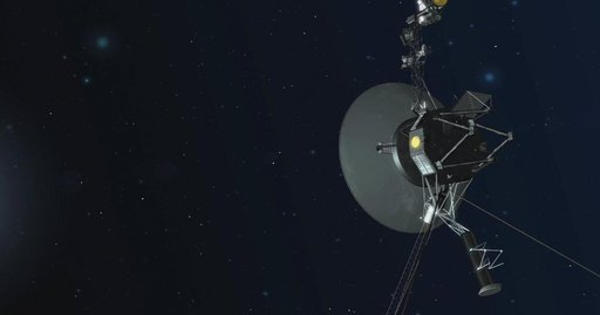 After years of development, NASA’s Innovative Advanced Concepts (NIAC) program has awarded the Lunar Crater Radio Telescope (LCRT) project $500,000 to support additional work as it enters Phase II. While not yet a NASA mission, the LCRT describes a mission concept that has the potential to change humanity’s perception of the universe.

The primary goal of the LCRT would be to measure the long-wavelength radio waves produced by the cosmic Dark Ages—a period that occurred a few hundred million years after the Big Bang but before the first stars blinked into existence. Cosmologists know very little about this time period, but the answers to some of science’s most perplexing questions may be locked in the long-wavelength radio emissions produced by the gas that would have filled the universe at the time.

“While there were no stars, there was plenty of hydrogen during the universe’s Dark Ages—hydrogen that would eventually serve as the raw material for the first stars,” said Joseph Lazio, a radio astronomer and member of the LCRT team at NASA’s Jet Propulsion Laboratory in Southern California. “With a sufficiently large radio telescope orbiting the Earth, we could track the processes that led to the formation of the first stars, and perhaps even discover clues to the nature of dark matter.”

The Lunar Crater Radio Telescope’s primary objective would be to measure the long-wavelength radio waves generated by the cosmic Dark Ages—a period that lasted for a few hundred million years after the Big Bang, but before the first stars blinked into existence.

Long-wavelength radio waves from that time are reflected by a layer of ions and electrons at the top of our atmosphere, a region known as the ionosphere, so radio telescopes on Earth can’t investigate it. Our noisy civilization’s random radio emissions can also interfere with radio astronomy, drowning out the faintest signals.

However, there is no atmosphere on the Moon’s far side to reflect these signals, and the Moon itself would block Earth’s radio chatter. The far side of the moon could be prime real estate for conducting unprecedented studies of the early universe.

“Because of our ionosphere, radio telescopes on Earth cannot see cosmic radio waves at about 33 feet [10 meters] or longer, so there’s a whole region of the universe that we simply cannot see,” said Saptarshi Bandyopadhyay, a robotics technologist at JPL and the project’s lead researcher. “However, previous ideas for building a radio antenna on the Moon were very resource intensive and complicated, so we felt compelled to come up with something new.”

The LCRT would have to be massive in order to be sensitive to long radio wavelengths. The plan is to build an antenna more than half a mile (1 kilometer) wide in a crater more than two miles (3 kilometers) wide. The world’s largest single-dish radio telescopes, such as China’s 1,600-foot (500-meter) Five-hundred-meter Aperture Spherical Telescope (FAST) and Puerto Rico’s now-defunct 1,000-foot-wide (305-meter-wide) Arecibo Observatory, were built inside natural bowl-like depressions in the landscape to provide a support structure.

This type of radio telescope makes the entire dish’s surface reflective to radio waves by suspending thousands of reflecting panels inside the depression. The receiver is then suspended via a cable system at a focal point over the dish, anchored by towers around the dish’s perimeter, to measure radio waves bouncing off the curved surface below. Nonetheless, despite its size and complexity, FAST is insensitive to radio wavelengths longer than about 14 feet (4.3 meters).

Bandyopadhyay and his team of engineers, roboticists, and scientists at JPL reduced this type of radio telescope to its most basic form. Their concept eliminates the need for prohibitively heavy material to be transported to the Moon and instead uses robots to automate the construction process. Instead of thousands of reflective panels to focus incoming radio waves, the LCRT in the crater would be made of thin wire mesh. One spacecraft would deliver the mesh, and a separate lander would deposit DuAxel rovers to construct the dish over a period of days or weeks.

JPL’s DuAxel robotic concept is made up of two single-axle rovers (called Axel) that can undock from each other but remain connected via a tether. One half would act as an anchor at the crater’s rim while the other rappelled down to complete the building.

“DuAxel solves many of the problems associated with suspending such a large antenna inside a lunar crater,” said Patrick Mcgarey, a JPL robotics technologist who worked on the LCRT and DuAxel projects. “While tethered, individual Axel rovers can drive into the crater, connect to the wires, apply tension, and lift the wires to suspend the antenna.”

To take the project to the next level, the team will use NIAC Phase II funding to refine the telescope’s capabilities and various mission approaches while identifying challenges along the way.

The design of the wire mesh is one of the team’s most difficult challenges during this phase. To keep its parabolic shape and precise spacing between wires, the mesh must be strong and flexible while remaining lightweight enough to be transported. The mesh must also be able to withstand the extreme temperature changes on the Moon’s surface, which can range from minus 280 degrees Fahrenheit (minus 173 degrees Celsius) to 260 degrees Fahrenheit (127 degrees Celsius) without warping or failing.

Another challenge is determining whether the DuAxel rovers should be fully automated or involve a human operator in decision-making. Could other construction techniques be used to supplement the DuAxels? For example, firing harpoons into the lunar surface may better anchor the LCRT’s mesh, requiring fewer robots.

The LCRT team will work for the next two years to identify additional challenges and questions. If they are successful, they may be chosen for further development, an iterative process that Bandyopadhyay admires.

“The evolution of this concept could result in some significant breakthroughs along the way, particularly for deployment technologies and the use of robots to build massive structures off Earth,” he said. “I’m honored to be working with such a diverse group of experts who inspire people all over the world to think big and make groundbreaking discoveries about the universe we live in.”