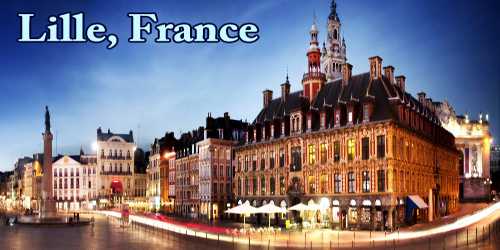 Lille (/liːl/ LEEL; French: lil; Dutch: Rijsel (ˈrɛisəl); Picard: Lile; West Flemish: Rysel) is a city, capital of Nord département and of the Hauts-de-France région, northern France, situated on the Deûle River, 136 miles (219 km) north-northeast of Paris, and 9 miles (14 km) from the Belgian frontier by road. The city is nestled close to the Belgium border and is the main city in France’s Nord-Pas-de-Calais region, which like Lille does not really have a reputation for pulling in the tourists, despite being home to two Unesco World Heritage sites.

Although not the most obvious city to visit in Europe, Lille is a city full of many surprises. With a history spanning across Spain, France, and Belgium, it owes more of its culture and architecture to Flemish influences, which makes this northern French city a feast for the eyes and tastebuds.

As of 2015, Lille had a population of 232,741 within its administrative limits, and Lille is the first city of the Métropole Européenne de Lille with a population of 1,182,127, making it the fourth-largest urban area in France after Paris, Lyon, and Marseille.

In 2020, Lille will become the World Design Capital (the first French city to do so), with design agencies and other creative enterprises opening their doors to the public, and exhibitions and festivities throughout the year. 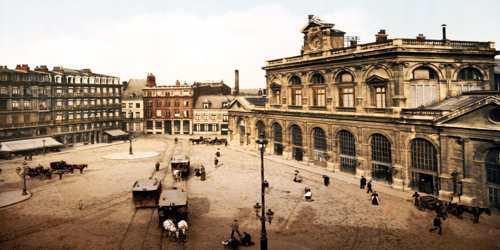 The name “L’Isle” first appeared in 1066, in the charter of a donation to the collegiate church of St Peter by Baudoin V, Count of Flanders, who owned a castle on one of the islands in the Deûle River. The town developed around this castle and around a port that existed on the site of the present Avenue du Peuple Belge.

The development of the business connections between the Netherlands, Flanders, and fairs of Champagne was essential for Lille, developing an axis of North-South traffic, which contrasted totally with the ancient Roman way (Boulogne-Arras-Bavay-Cologne).

During this period, the city was organized around the forum, the market square (now called the Grand Place) and the castrum (now Old Lille). The castrum was a fortified urban center, enclosed by protective watercourses. It included the castle mound (demolished during the construction of the “Cathédrale Notre-Dame de la Treille”) and the Residence of the Counts of Flanders, known by the name of “Palais de la Salle”, which is no longer in existence.

The medieval town was destroyed or changed hands several times. Louis XIV besieged and claimed it in 1667. After being captured by the duke of Marlborough in 1708, it was finally ceded to France in 1713 by the Treaty of Utrecht. Lille was damaged and also occupied by the Germans during World Wars I and II.

From 1931 Lille felt the repercussions of the Great Depression, and by 1935 a third of the city’s population lived in poverty. In 1936, the city’s mayor, Roger Salengro, became Minister of the Interior of the Popular Front, eventually killing himself after right-wing groups led a slanderous campaign against him.

With a population of almost 220 000 inhabitants, thanks to the recent addition of the town of Lomme, Lille claims its place as the tenth largest city and fourth-largest metropolis (1.9 million inhabitants including 700 000 over the Belgian border) in France. With 36 % of the population aged under 25, Lille is a vibrant, young, and dynamic city. 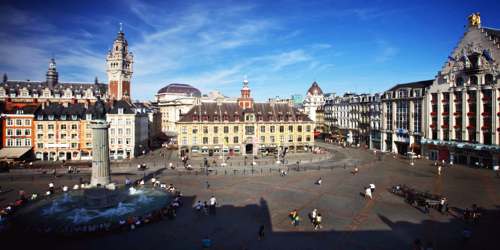 France’s fourth biggest city, Lille, is often overlooked as a place to settle in France. Lille can be described as having a temperate oceanic climate; summers normally do not reach high average temperatures, but winters can fall below freezing temperatures but with averages quite a bit above the freezing mark. Precipitation is plentiful year-round.

Lille is noted for its air pollution, with a 2018 study attributing 1,700 deaths per year in the agglomeration of Lille to pollution. In 2018, Lille held France’s record pollution peaks.

With Tourcoing and Roubaix, Lille forms one of the largest conurbations in France. Its commercial and industrial activities have been stimulated by its proximity to the northern countries of the European Union (EU) and by its good communications location. It is an important railway junction with high-speed rail links to London, Brussels, Paris, and other regions of southern and western France. It is served by a regional airport and a river port, and it lies at the hub of an extensive network of highways. Lille developed rapidly in the 19th century and became a center of industrial activities such as the manufacture of textiles, machinery, and chemicals, as well as food processing. More recent additions included electronics and information technology industries, many of them located in the peripheral suburbs, away from the traditional industrial districts. Their arrival, however, did not prevent the substantial decline of manufacturing in the city in later decades.

Lille lies in the heart of the triangle that links three of Europe’s main metropoles – London, Paris, and Brussels. It seems like all roads and rail links lead to Lille, which is 35 minutes from Brussels, one hour from Paris, and 80 minutes from London. This means it makes a very accessible location for a weekend away. And the city boasts what was the world’s first driverless metro system, which opened in 1983.

Lille has long played an important role as a regional service and administrative center. Notably, it is the home of several universities and a number of hospitals. This role has been reinforced by the relocation to Lille of public services such as the central reservation center for French Railways. Lille is also a major research center, specializing in fields such as medicine (the Pasteur Institute and the laboratories of pharmaceutical companies) and electronics.

The city has long acted as a business capital offering a range of banking and financial services. This role was reinforced by the development of the huge Euralille complex, to the east of the city center, which is linked to the high-speed-train station (Lille Europe) and includes stores, offices, hotels, and a joint conference, exhibition, and concert hall facility. Lille serves as an important cultural capital for much of northern France. 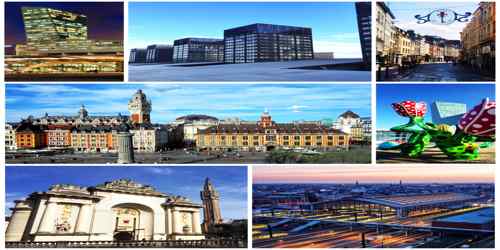 Lille features an array of architectural styles with various amounts of Flemish influence, including the use of brown and red brick. In addition, many residential neighborhoods, especially in Greater Lille, consist of attached 2–3 story houses aligned in a row, with narrow gardens in the back. These architectural attributes, many uncommon in France, help make Lille a transition in France to neighboring Belgium, as well as nearby Netherlands and England, where the presence of brick, as well as row houses or the terraced house, is much more prominent.

Throughout the entire heart of the city, private houses have been demolished and replaced by modern multistory buildings. Adapting the city to new needs also involved the introduction of a fully automated subway system serving the central city and suburbs, the “pedestrianization” of shopping streets, the cleaning of building facades, and the restoration of the “old quarter” (Saint-Sauveur). Together, such changes contributed to the development of tourism in Lille. Between the three cities of the Lille-Tourcoing-Roubaix conurbation, a new town, Villeneuve d’Ascq, was built in the 1970s. Apart from its residential function, it houses university departments, research laboratories, and a major regional shopping center.

Known as “The Capital des Flandres”, Lille is particularly well-known for its culture and its Flemish roots. The city only became French when Louis XIV besieged and conquered it from the Spanish Netherlands in 1667.

Strolling along the streets of the old city (Le Vieux Lille) is a showcase of the city’s French and Flemish architecture. The streets are paved with stone and lined with tall red-brick buildings and golden sandstone houses which are now established upmarket shops and flats.

The Palais des Beaux-Arts museum (pictured below), home to France’s second-largest art collection after the Louvre, displays work from Goya, Rembrandt, and Rubens.

Lille hosts an annual braderie on the first weekend in September. Its origins are thought to date back to the twelfth century and between two and three million visitors are drawn into the city. It is one of the largest gatherings of France and the largest flea market in Europe. Many of the roads in the inner city (including much of the old town) are closed and local shops, residents and traders set up stalls in the street.

In 2004, Lille was elected European Capital of Culture and since then the scheme Lille 3000 has pushed to promote the city’s cultural heritage and contemporary artists through regular events and festivals.

Take a look around some of its grandest buildings like the Town Hall and its 104-meter tall Belfry, the opulent Vieille Bourse, and the Musee de l’Hospice Comtesse before stopping off for a traditional ‘merveilleux’ a sandwich of two light meringues stuffed full of whipped cream and covered in chocolate shavings.