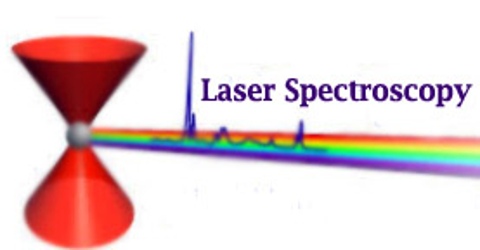 Laser spectroscopy has led to advances in the precision with which spectral line frequencies can be measured, and this has fundamental significance for our understanding of basic atomic processes. This precision has been obtained by passing two laser beams through the absorption sample in opposite directions, selectively triggering absorption only in those atoms that have a zero velocity component in the direction of the beams. This effectively eliminates the Doppler broadening of spectral lines from the distribution of atomic velocities present in the sample. Lasers have led to a revolution of classical spectroscopy, because laser light can far surpass the light from other sources in brightness, spectral purity, and directionality; and if required, laser light can be produced in extremely intense and short pulses, far enhancing the possibility of observing nonlinear phenomena. The use of lasers can greatly increase the resolution and sensitivity of conventional spectroscopic techniques, such as absorption spectroscopy, fluorescence spectroscopy, or Raman spectroscopy. Laser spectroscopy has become a wide and diverse field, with applications in numerous areas of physics, chemistry, and biology. A fiber laser is usually generated first from a laser diode. The laser diode then couples the light into a fiber where it will be confined. Different wavelengths can be achieved with the use of doped fiber. The pump light from the laser diode will excite a state in the doped fiber which can then drop in energy causing a specific wavelength to be emitted. This wavelength may be different from that of the pump light and more useful for a particular experiment. A dye laser is a four-level laser which uses organic dye as the gain medium. Pumped by a laser with a fixed wavelength, due to various dye types you use, different dye lasers can emit beams with different wavelengths. A ring laser design is most often used in a dye laser system. Also, tuning elements, such as a diffraction grating or prism, are usually incorporated in the cavity. This allows only light in a very narrow frequency range to resonate in the cavity and be emitted as laser emission. The wide tuneability range, high output power, and pulsed or CW operation make the dye laser particularly useful in many physical & chemical studies. Ultrafast optical pulses can be used to generate x-ray pulses in multiple ways. An optical pulse can excite an electron pulse via the photoelectric effect, and acceleration across a high potential gives the electrons kinetic energy. When the electrons hit a target they generate both characteristic x-rays and bremsstrahlung. A second method is via laser induced plasma. When very high intensity laser light is incident on a target, it strips electrons off the target creating a negatively charged plasma cloud. The strong Coulomb force due to the ionized material in the center of the cloud quickly accelerates the electrons back to towards the nuclei left behind.