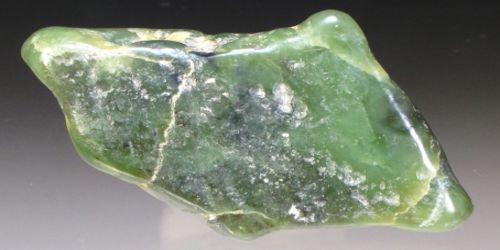 Jadeite is a pyroxene mineral with composition NaAlSi2O6. It is monoclinic. It is a usually green monoclinic mineral of the pyroxene group that is a silicate of sodium and aluminum and is a jade. The name jadeite is derived (via French: l’ejade and Latin: ilia) from the Spanish phrase “piedra de ijada” which means “stone of the side”.

The Latin version of the name, lapis nephriticus, is the origin of the term nephrite, which is also a variety of jade. Rocks that consist almost entirely of jadeite are called jadeitite. Jadeitite is resistant to weathering, and boulders of jadeitite released from the serpentine-rich environments in which they formed are found in a variety of environments. It has a Mohs hardness of about 6.5 to 7.0 depending on the composition. The mineral is dense, with a specific gravity of about 3.4.

Jadeite is formed in metamorphic rocks under high pressure and relatively low temperature conditions. Albite (NaAlSi3O8) is a common mineral of the Earth’s crust, and it has a specific gravity of about 2.6, much less than that of jadeite. With increasing pressure, albite breaks down to form the high-pressure assemblage of jadeite plus quartz. Minerals associated with jadeite include: glaucophane, lawsonite, muscovite, aragonite, serpentine, and quartz.

In all well-documented occurrences, jadeitite appears to have formed from subduction zone fluids in association with serpentinite.