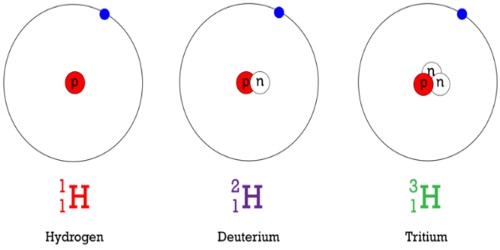 The atoms of a chemical element can exist in different types. These are called isotopes. They have the same number of protons (and electrons), but different numbers of neutrons. For example, an atom with 6 protons must be carbon, and an atom with 92 protons must be uranium. Different isotopes of the same element have different masses. The isotope of an element is defined by the nucleon number, which is the sum of the number of protons and the number of neutrons in the atomic nucleus.

Atomic nuclei are protons and neutrons held together by the nuclear force.

Because protons are positively charged, they repel each other. Neutrons, which are neutral, stabilize the nucleus. Because they are in the nucleus, the protons are pushed slightly apart. This reduces the electrostatic repulsion between the protons. They still exert the attractive nuclear force on each other and on protons. One or more neutrons are necessary for two or more protons to bind into a nucleus. As the number of protons increases, so does the number of neutrons needed to have a stable nucleus.