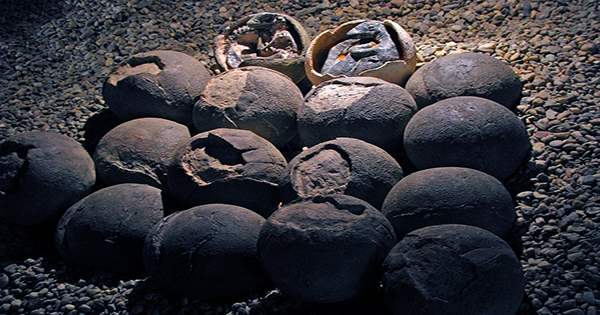 A completely articulated dinosaur embryo has discovered inside a fossilized egg that had been accumulating dust in a museum’s storage room for almost a decade. The fetal specimen, estimated to be between 66 and 72 million years old, demonstrates an extraordinary relationship between dinosaurs and contemporary birds. The unhatched creature believe to be around 27 centimeters (10.6 inches) long and belongs to a group of feathered, toothless theropods known as oviraptorosaurs. It is the first finding of a dinosaur embryo with a position similar to that of modern-day bird embryos.

Modern birds perform a sequence of moves known as tucking shortly before hatching, which involves curling the body and lowering the head down under the wing, but the evolutionary roots of this behavior have remained unclear until now. The study authors describe that their specimen, dubbed Baby Yingliang, discovered with its head “ventral to the torso, with the feet on each side, and the back coiled along the blunt pole of the egg” in the journal iScience. “Previously unidentified in a non-avian dinosaur,” they write, “yet evocative of a late-stage contemporary bird embryo.”

Tucking regarded to be important in the hatching process of birds, and those that do not adopt this position have a significantly lower chance of surviving their escape from the egg. The fact that Baby Yingliang appears to have adopted the same stance shows that the phenomena may have originated among contemporary birds’ old theropod relatives. “This small pregnant dinosaur looks precisely like a newborn bird wrapped in its egg,” research author Professor Steve Brusatte said in response to this exciting finding. “Many traits typical of today’s birds initially emerged in their dinosaur forebears.”

Infant Yingliang, on display at the Yingliang Stone Nature History Museum, is one of the most complete dinosaur embryos ever discovered, providing researchers with a unique glimpse at an intact baby theropod. However, because it is the sole example of its sort, the researchers confess that their findings do not allow them to make definite conclusions about the biology of dinosaur embryos, and that additional fossils like this will need to investigate before any ideas can validated. “This new remarkable fossil embryo implies that several early developmental characteristics (tucking) commonly assumed to be distinctively avian may be based more deeply in the theropod lineage,” they conclude.