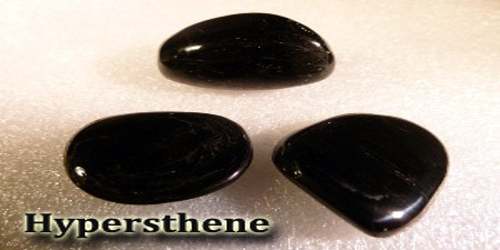 Hypersthene is a green, brown, or black pyroxene mineral consisting of magnesium iron silicate in orthorhombic crystalline form. It is a common rock-forming inosilicate mineral belonging to the group of orthorhombic pyroxenes. Many references have formally abandoned this term, preferring to categorise this mineral as enstatite or ferrosilite. It is found in igneous and some metamorphic rocks as well as in stony and iron meteorites. 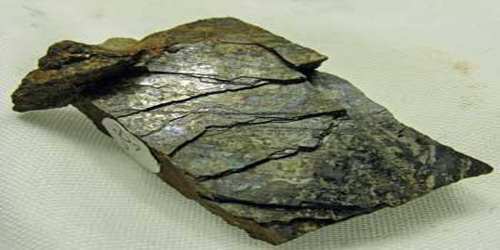 The name “hypersthene” comes from the Greek and means “over strength”, and is an allusion to its being harder than the amphibole mineral hornblende (a mineral with which it is often confused).

Hypersthene is sometimes referred to as ‘velvet labradorite’, however the name is misleading, and it is not labradorite at all. However ‘velvet’ definitely applies to the quality of its energy. Hypersthene calms, sooths, and quiets in general, and is especially helpful when the mind is overactive, shielding us from outside ‘noise’ in a velvety, protective cocoon.

It forms a solid solution series with the minerals enstatite and ferrosilite, being a mid-way member between the two. Pure enstatite contains no iron, while pure ferrosillite contains no magnesium; hypersthene is the name given to the mineral when a significant amount of both elements are present. The chemical formula is (Mg,Fe)SiO3. The coarse-grained labradorite-hypersthene-rock (norite) of Paul’s Island off the coast of Labrador has furnished the most typical material; for this reason, the mineral has been known as Labrador hornblende or paulite. 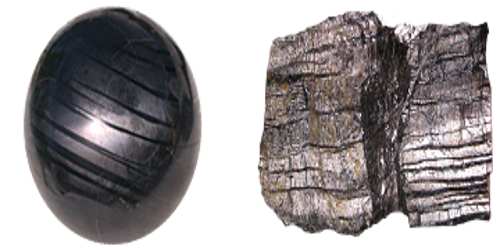 Properties and Applications of Hypersthene

Hypersthene calms, soothes, grounds and has a gentle quietening effect; it is especially helpful for an overactive mind, shielding us from external hectic-ness in a soft, protective bubble. It encourages a more organised manner energetically as well as in thought, so we can find solutions to problems and helpful ways of moving forward. Color is often gray, brown, or green, and the luster is usually vitreous to pearly. The pleochroism is strong, the hardness is 5–6, and the specific gravity is 3.4–3.9. On certain surfaces it displays a brilliant copper-red metallic sheen, or schiller, which has the same origin as the bronzy sheen of bronzite, but is even more pronounced. Like bronzite, it is sometimes cut and polished as a gemstone. 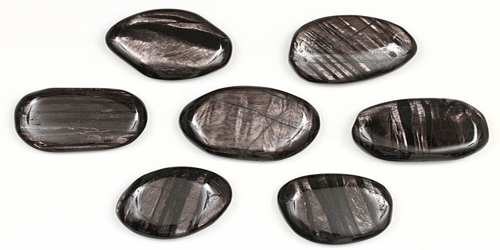 Hypersthene arranges both energy and thought in a more organised manner, so people can have a clearer idea of the way forward and realise solutions to problems. By calming, grounding and protecting, it is an excellent aid to deep meditation, profound inner reflection, and can take people on journeys into other dimensions of consciousness, travelling beyond the limitations of body and mind. As it calms without drowsiness, it can be effective in situations of stress where one needs to remain alert and express oneself clearly, such as in making a presentation.