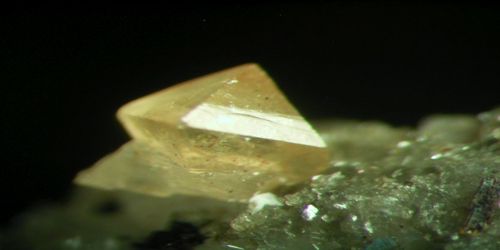 Kainosite is a silicate mineral that has the formula of Ca2(Y, Ce) SiO4O12(CO3)•(H2O). It is a mineral consisting of hydrous silicate and carbonate of calcium, cerium, and yttrium. Kainosite was first discovered in Norway on the island of Hitterø and was named by Adolf Erik Nordenskiöld (1832–1901) in allusion to the Greek word for “unusual” for its rarity and exotic composition.

Kainosite is very rare and mostly found in Russia in vugs, pegmatites, granites, and alkalic complex as an altered product of the mineral kuliokite. Kainosite, is part of the orthorhombic crystal class minerals, which is a system that results from stretching a cubic lattice along two of its orthogonal pairs. Kainosite is a biaxial mineral, so the light entering its crystals will be polarized in two vibration directions (XYZ) for it has two optic axes.

Occurrence: In vugs in pegmatites in granites and alkalic complexes. Localities for Kainosite can be found in Norway, Sweden, Switzerland, Austria, Italy, Russia, the United States, and Canada.