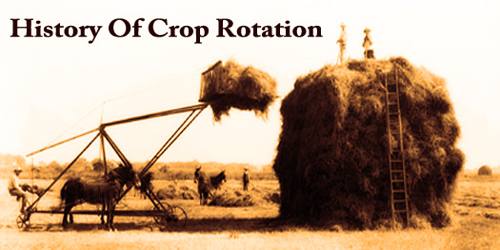 Crop rotation is a very practical way of farming. It is the practice of growing a series of different types of crops in the same area across a sequenced of growing seasons. It reduces reliance on one set of nutrients, pest and weed pressure, and the probability of developing resistant pests and weeds.

A basic principle of crop rotation is not to grow the same thing in the same place two years running. In fact, the larger the gap between crops occupying the same piece of ground the better. Some pests may be present at high levels initially but a gap of three or four years will see their numbers fall to acceptable levels without a host to sustain them. There are many different systems for rotating crops, some fairly crude and some quite complex, designed to ensure that the following crops utilize nutrients left by previous crops.

Growing the same crop in the same place for many years in a row gradually depletes the soil of certain nutrients and selects for a highly competitive pest and weed community. Without balancing nutrient use and diversifying pest and weed communities, the productivity of monocultures is highly dependent on external inputs. Conversely, a well-designed crop rotation can reduce the need for synthetic fertilizers and herbicides by better using ecosystem services from a diverse set of crops. Additionally, crop rotations can improve soil structure and organic matter, which reduces erosion and increases farm system resilience.

Throughout human history, wherever food crops have been produced, some kind of rotation cropping appears to have been practiced. One system in central Africa employs a 36-year rotation; a single crop of finger millet is produced after a 35-year growth of woody shrubs and trees has been cut and burned. In the major food-producing regions of the world, various rotations of much shorter length are widely used. Some of them are designed for the highest immediate returns, without much regard for the continuing usefulness of the basic resources. Others are planned for high continuing returns with protected resources. The underlying principles for planning effective cropping systems began to emerge in the middle years of the 19th century.

Agriculturalists have long recognized that suitable rotations such as planting spring crops for livestock in place of grains for human consumption make it possible to restore or to maintain a productive soil. Ancient Middle Eastern farmers practiced crop rotation in 6000 BC without understanding the chemistry, alternately planting legumes and cereals. In the Bible, chapter 25 of the Book of Leviticus instructs the Israelites to observe a “Sabbath of the Land”. Every seventh year they would not till, prune or even control insects.

The concept of crop rotation goes into prehistory so answering the question of who invented crop rotation and when is not easy. Early crop rotation methods were mentioned in Roman literature, and from the Middle Ages to the 18th Century, a three-year rotation was practiced by farmers including a fallow year.

Then a four-year rotation came into use, invented by Jethro Tull, author of Horse Hoeing Husbandry, subtitled “an Essay on the Principles of Tillage and Nutrition”. He just happened to invent the seed drill and horse-drawn hoe while he was at it and was one of the main architects of the British agricultural revolution.

Over in the USA, George Washington Carver was instrumental in introducing crop rotation into the southern states where the monoculture permanent growth of cotton was depleting the soil and increasing pest populations. By rotating with peanuts and sweet potatoes he provided the means for growing alternative cash crops and increasing yields of all crops.

In the Green Revolution of the mid-20th century, the traditional practice of crop rotation gave way in some parts of the world to the practice of supplementing the chemical inputs to the soil through topdressing with fertilizers, adding (for example) ammonium nitrate or urea and restoring soil pH with lime. Such practices aimed to increase yields, to prepare the soil for specialist crops, and to reduce waste and inefficiency by simplifying planting, harvesting, and irrigation.

Some crops really sit outside of the crop rotation. Those in permanent beds such as rhubarb, comfrey, and asparagus obviously do not need to be considered and some crops do not easily fit in like cucurbits the cucumber family that includes pumpkins, marrows, and squashes.

Many challenges exist within the practices associated with crop rotation. For example, green manure from legumes can lead to an invasion of snails or slugs and the decay from green manure can occasionally suppress the growth of other crops.