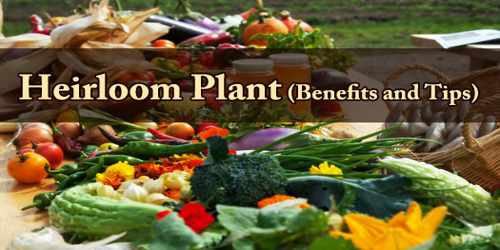 Heirloom plants are older cultivars of a particular fruit or vegetable that are grown in very small numbers today. Heirlooms do not play a large role in modern agriculture because they don’t always ripen consistently and often end up growing in peculiar shapes or appearances.

Instead, heirlooms are perfect for home gardeners who find these varieties unique and fun to grow. Most heirloom plants are grown by gardeners or farmers in small, isolated areas.

In some parts of the world, it is illegal to sell seeds of cultivars that are not listed as approved for sale. The Henry Doubleday Research Association, now known as Garden Organic, responded to this legislation by setting up the Heritage Seed Library to preserve seeds of as many of the older cultivars as possible. However, seed banks alone have not been able to provide sufficient insurance against catastrophic loss. In some jurisdictions, like Colombia, laws have been proposed that would make seed saving itself illegal.

Many heirloom vegetables have kept their traits through open pollination, while fruit varieties such as apples have been propagated over the centuries through grafts and cuttings. The trend of growing heirloom plants in gardens has been returning in popularity in North America and Europe.

Difference between Hybrid and Heirloom –

So, what is the difference between hybrid and heirloom plants? Growing heirloom vegetables and fruits means that the seeds from these are open-pollinated; therefore, characteristics of each particular cultivar is passed on exactly from year to year. For example, the same size, growth habit, color, and flavor will be passed from the parent plant of this year to the seedlings of next year.

Conversely, the nature of a hybrid is that it is composed of two or more cultivars to create a new variety containing chosen traits from all and can be cross-pollinated, which often results in sort of a mix up of desirable traits.

There’s a lot of discussions today about the benefits of heirloom plants, but it can be difficult to understand exactly what the word “heirloom” actually means. Really, it’s nothing more than a notation that the particular plant in question is an older cultivar, often dating back decades, or even centuries.

While heirloom gardening has maintained a niche community, in recent years it has seen a resurgence in response to the industrial agriculture trend. In the Global South, heirloom plants are still widely grown, for example, in the home gardens of South and Southeast Asia. Before World War II, the majority of the produce grown in the United States was heirlooms.

The benefits of heirlooms are their time-proven attributes such as superior flavor, color, size, and production. Some varieties of heirloom plants can be traced back hundreds of years and have been cultivated by Native American people. Varieties of heirloom plants have often been passed down through not only the family tree but via whole groups of people who recognize their positive characters and choose to save seeds from the best tasting and most productive plants. Other benefits of heirlooms are the sheer variety and may be chosen for their distinctive shapes and unique colors. In other words, they are just fun to grow! Of course, one of the greatest benefits of heirlooms is in maintaining the diverse genetic base represented so as not to lose these crucial traits.

In the 21st century, numerous community groups all over the world are working to preserve historic varieties to make a wide variety of fruits, vegetables, herbs, and flowers available again to the home gardener, by renovating old orchards, sourcing historic fruit varieties, engaging in seed swaps, and encouraging community participation.

First, when attempting to grow heirlooms, don’t save seeds from hybrids as they won’t produce the same plant as that of the parent. Vegetables which are mostly self pollinators like beans, peas, peanuts, eggplants, tomatoes, peppers, and lettuces are great choices for saving heirlooms seeds as they will duplicate the qualities of the parent plant. Since insects will on occasion pollinate these varieties of heirloom plants, they should be planted at least 10 feet apart. Insect or wind-pollinated heirloom varieties should be planted several hundred yards or so from other varieties, to prevent cross-pollination. These include:

To completely preserve the quality of an heirloom, it’s best, especially for the small home gardener, to plant only one variety of a species at any one time to prevent cross over. Heirloom vegetables may be grown separately in screened cages or individual flowers can be bagged and hand pollinated. Time isolation wherein the timing of the flowering plants is staggered may also be used to reduce cross-pollination.

An heirloom plant may or may not be a genetic cross or a variety developed by a specific individual or company in the past. However, heirloom plants are distinct from hybrids in that they breed true to type, and are often localized to better withstand geographic-specific conditions like drought or mineral-depleted soils.

Heirlooms are chosen specifically by some farmers and gardeners because of the benefits they can often provide. For instance, many farmers cite that heirloom varieties have more flavor than conventionally grown vegetables and fruits. Heirloom plants are also open-pollinated, which means that insects or even the wind facilitate pollination with no outside help from humans needed.

Choose the healthiest, most productive, and tastiest plants to save seed from before harvesting the entire crop. Allow seeds to ripen prior to harvesting, as they are more likely to produce healthier plants. Then bring the seeds indoors to continue to dry. Label them clearly with the date and variety. Three to five years of shelf life is ideal for most dry seeds stored in a sealed glass jar in a cool, dry area. Silica gel packs will aid in keeping the seeds dry and diatomaceous earth can be added to deter insects.

As the effects of climate change intensify and the world population rises, more attention is being put on heirloom plants as a way to restore genetic diversity and feed a growing population while safeguarding the food supply of diverse regions. Specific heirloom plants are often selected, saved, and planted again because of their superior performance in a particular locality. Over many crop cycles, these plants develop unique adaptive qualities to their environment which empowers local communities and can be vital to maintaining the genetic resources of the world.