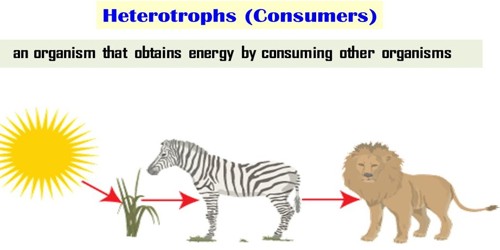 A heterotroph is an organism requiring organic compounds for its principal source of food. It is an organism that requires organic substrates to get its carbon for growth and development. It depends either directly or indirectly on autotrophs for nutrients and food energy. By consuming reduced carbon compounds, heterotrophs are able to use all the energy that they consume for growth, reproduction and other biological functions. Some examples of heterotrophs include – Human beings, Cows, Snakes, Ants, Mosquitoes, etc.

Heterotrophs survive by feeding on organic matter produced by or available in other organisms. There are two types of heterotrophs:

Photoheterotroph – These heterotrophs use light for energy but cannot use carbon dioxide as their carbon source. They get their carbon from compounds such as carbohydrates, fatty acids, and alcohol.

Chemoheterotroph – Heterotrophs that get their energy by oxidation of preformed organic compounds, i.e. by eating other organisms either dead or alive. 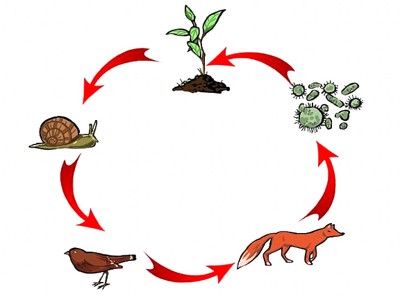 A heterotroph is known as a consumer in the food chain. In the food chain, they are secondary and tertiary consumers. Consumers are organisms that cannot make their own food supply. They use the food that producers make, or they eat other organisms. Animals are consumers. To stay alive, consumers must get food from other organisms. They consist of all animals ranging from mammals to bacteria. There are three types of consumers: Herbivores, Carnivores, and Omnivores.

Consumers that only eat animals are called carnivores. The word comes from the Latin carnis, which means “flesh”, and vorare, which means “to eat.” The energy that is transferred through the food chain, initially from the inorganic compounds, converted to organic compounds that are used as energy by autotrophs, is stored within the body of the heterotrophs called primary consumers. A tiger is an example of a carnivorous consumer.

Consumers that eat both plants and animals are called omnivores. The word comes from the Latin omnis, which means “all” and vorare. Humans are a good example of an omnivorous consumer.