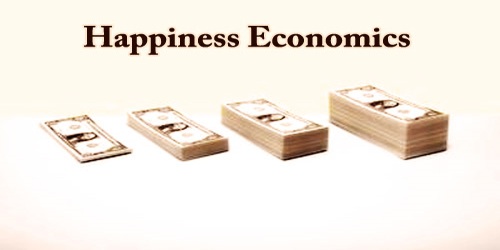 Happiness Economics or the economics of happiness is the formal academic study of the relationship between individual satisfaction and economic issues such as employment and wealth. Happiness economics attempts to use econometric analysis to discover what factors increase and decrease human well-being and quality of life.

It is the quantitative and theoretical study of happiness, positive and negative affect, well-being, quality of life, life satisfaction, and related concepts, typically combining economics with other fields such as psychology, health, and sociology. It typically treats such happiness-related measures, rather than wealth, income or profit, as something to be maximized. The field has grown substantially since the late 20th century, for example by the development of methods, surveys, and indices to measure happiness and related concepts. Its findings have been described as a challenge to the economics profession.

Actually, Happiness economics attempts to evaluate a wider range of factors affecting well-being, quality of life, and self-reported levels of happiness. There are now several measures of happiness, such as Gross Domestic Happiness (GDH); Countries such as Bhutan, France, and the UK have, to varying degrees, started using ‘happiness indexes’ in measuring economic performance.

Measuring happiness and quality of life presents a challenge because of its normative subjective nature, but supporters argue that taking into account more in-depth factors affecting the quality of life helps to make economics more relevant to real life.

Happiness economics is a relatively new branch of research. It seeks to identify the economic determinants of well-being, mainly by asking people to fill out surveys. Previously, economists did not bother compiling such research, preferring to define what drives happiness from afar based on their own understandings.

In effect, determining the well-being and preferences of individuals is not an easy task. Happiness can be difficult to categorize because it is a subjective measure.

Regardless of these challenges, those who study happiness economics continue to argue that it is essential to examine factors affecting the quality of life, beyond typical areas of economic studies such as income and wealth.

They set out to achieve their goal by sending out surveys that directly ask people to rank their level of happiness. They also analyze indices tracking the quality of life in different countries, focusing on factors such as access to health care, life expectancy, literacy levels, political freedom, gross domestic product (GDP) per capita, cost of living, social support, and pollution levels.

The subject (Happiness economics) may be categorized in various ways, depending on specificity, intersection, and cross-classification. For example, within the Journal of Economic Literature classification codes, it has been categorized under:

Some scientists claim that happiness can be measured both subjectively and objectively by observing the joy center of the brain lit up with advanced imaging, although this raises philosophical issues, for example about whether this can be treated as more reliable than reported subjective happiness.

Relationship between income and happiness –

However, after certain income levels, there can be a rapid diminishing marginal utility of wealth and income with rising income doing little to increase overall utility/happiness.

One study by XYZ and ABC found emotional well-being rose with earnings only up to a threshold of $75,000 annual salary.

Typically national financial measures, such as gross domestic product (GDP) and gross national product (GNP), have been used as a measure of successful policy. There is a significant association between GDP and happiness, with citizens in wealthier nations being happier than those in poorer nations. It has been argued that this relationship extends only to an average GDP per capita of about $15,000. In the 2000s, several studies have obtained the opposite result, so this Easterlin paradox is controversial.

One difficulty is that richer countries also have higher levels of social cohesion, social trust, stable political system; this may lead to happiness rather than the GDP. It can become difficult to know whether happiness is due to high GDP or other features of high-income countries.

Historically, economists have said that well-being is a simple function of income. However, it has been found that once wealth reaches a subsistence level, its effectiveness as a generator of well-being is greatly diminished. Happiness economists hope to change the way governments view well-being and how to most effectively govern and allocate resources given this paradox.

Over the past 30 or so years, a number of happiness economics metrics have emerged. Common ones include Gross Domestic Happiness (GDH) and happiness indices that aim to track the well-being of people living in several countries in the world.

The research of happiness economics has generally found that people in wealthier countries with high-quality institutions tend to be happier than people in countries with less wealth and poorer institutions. Research compiled by pollster Gallup since 2005 revealed that doubling GDP per person boosts life satisfaction by about 0.7 points. However, several other studies have poked holes in the assumption of neoclassical economics that higher-income always correlates to greater levels of utility and economic welfare.

For people earning low levels of income, many economists discovered that more money does generally increase happiness as it enables a person to buy goods and services considered essential to the basics of life such as food, shelter, health care, and education. But there is believed to be a threshold, somewhere in the region of $75,000, after which no amount of extra money is reported to boost life satisfaction.

Historically, economists thought economic growth was unrelated to population-level well-being, a phenomenon labeled the Easterlin paradox. More robust research has identified that there is a link between economic development and the wellbeing of the population. A <2017 meta-analysis shows that the impact of infrastructure expenditure on economic growth varies considerably. So, one cannot assume an infrastructure project will yield welfare benefits. The paper doesn’t investigate or elaborate on any modifiable variables that might predict the value of a project. However, government spending on roads and primary industries is the best value target for transport spending, according to a 2013 meta-analysis. 7%+/−3% per annum discount rates are typically applied as the discount rate on public infrastructure projects in Australia. Smaller real discount rates are used internationally to calculate the social return on investment by governments.

Other factors that impact happiness include the quality and type of work people are doing, as well as the number of hours they are working. Several studies show that job satisfaction is more important than income levels. Boring repetitive jobs may give little joy, while self-employment or work in creative skilled jobs can lead to greater satisfaction.

Working more can also increase happiness, particularly if it is work someone enjoys, but even then there is a limit as working consistently long hours results in higher stress and less happiness. Studies also indicate that time for leisure can be just as important as the quality of work when it comes to human well-being and happiness.