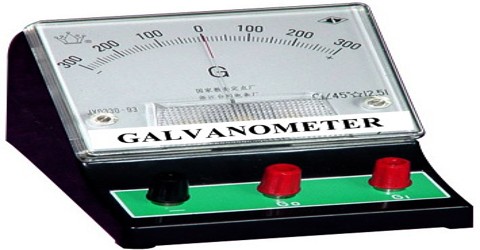 Galvanometer is an instrument to detect the presence of current through a circuit. It consists of a permanent magnet and coil. Current passes through the coil and causes the magnet to move; in a galvanometer the magnet is usually fixed and the coil attached to an arm or a vane or a needle whose deflection is proportional and in direction according to the polarity and magnitude of the current. Galvanometer is often used to refer to things other than devices which measure electrical current, such as charge or resistance; there is an amazing array of early designs for this instrument, considering their simplicity. Many of these design differences are to do with the cases that surround what is basically a twisting wire; however there is something definitively analog in their mechanism and 19th century amateur scientist in their variety.

Early galvanometers represent the extreme opposite of today’s high energy physics, which requires giant multi billion dollar apparatuses and extreme digital processing for measurement. A long way off a compass and a battery.

They can be used for the measurement of extremely small currents to a high degree of accuracy. It has practically no self-induction or capacity and can therefore be used on a circuit of any frequency. A mirror galvanometer is a mechanical meter that senses electric current, except that instead of moving a needle, it moves a mirror. Mirror galvanometers were used extensively in scientific instruments before reliable, stable electronic amplifiers were available. The most common uses were as recording equipment for seismometers and submarine cables used for telegraphy.

Ballistic galvanometer is a type of mirror galvanometer. It can be either of the moving coil or moving magnet type, but unlike a current-measuring galvanometer, the moving part has a large moment of inertia, thus giving it a low oscillation period. It is really an integrator measuring the quantity of charge discharged through it Probably the largest use of galvanometers was the D’Arsonval/Weston type movement used in analog meters in electronic equipment. Since the 1980s, galvanometer-type analog meter movements have been displaced by analog to digital converters (ADCs) for some uses. A digital panel meter (DPM) contains an analog to digital converter and numeric display. The advantages of a digital instrument are higher precision and accuracy, but factors such as power consumption or cost may still favor application of analog meter movements.