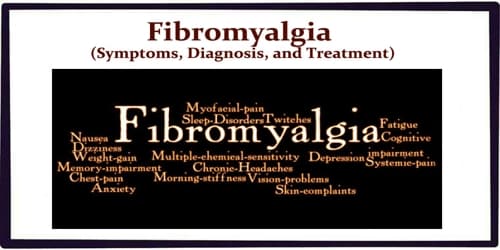 Definition: Fibromyalgia (FM) is a long-term or chronic disorder, which is characterized by chronic widespread pain and a heightened pain response to pressure. Researchers believe that fibromyalgia amplifies painful sensations by affecting the way your brain processes pain signals.

Symptoms of fibromyalgia can be confused with those of arthritis, or joint inflammation. However, unlike arthritis, it has not been found to cause joint or muscle inflammation and damage. It is seen as a rheumatic condition, in other words, one that causes soft tissue pain or myofascial pain.

The cause of fibromyalgia is unknown; however, it is believed to involve a combination of genetic and environmental factors, with each playing a substantial role. The condition runs in families and many genes are believed to be involved. Environmental factors may include psychological stress trauma and certain infections.

Risk factors for fibromyalgia include:

There is no specific diagnostic test. Diagnosis involves first ruling out other potential causes and verifying that a set number of symptoms are present. The treatment of fibromyalgia can be difficult. Recommendations often include getting enough sleep, exercising regularly and eating a healthy diet. Cognitive behavioral therapy (CBT) may also be helpful. The medications duloxetine, milnacipran or pregabalin may be used. Signs and Symptoms of Fibromyalgia: Fibromyalgia is often associated with areas of tenderness, which are called trigger points or tender points. The pain caused by these trigger points can also be described as a consistent dull ache affecting many areas of people’s body. If they were to experience this pain for at least three months, doctors may consider this a symptom of fibromyalgia.

The following are also possible:

Symptoms can appear at any time during a person’s life, but they are most commonly reported around the age of 45 years.

Although fibromyalgia is classified based on the presence of chronic widespread pain, pain may also be localized in areas such as the shoulders, neck, low back, hips, or other areas. Many sufferers also experience varying degrees of myofascial pain and have high rates of comorbid temporomandibular joint dysfunction. 20–30% of people with rheumatoid arthritis and systemic lupus erythematosus may also have fibromyalgia. Diagnosis and Treatment of Fibromyalgia: There is no single test that can fully diagnose fibromyalgia and there is debate over what should be considered essential diagnostic criteria and whether an objective diagnosis is possible. In most cases, people with fibromyalgia symptoms may also have laboratory test results that appear normal and many of their symptoms may mimic those of other rheumatic conditions such as arthritis or osteoporosis.

There isn’t a lab test that can detect fibromyalgia. Instead, blood testing may be used to help rule out other potential causes of chronic pain. Blood tests may include:

Medical attention is needed because fibromyalgia can be difficult to manage. As it is a syndrome, each patient will experience a different set of symptoms, and an individual treatment plan will be necessary.

In general, treatments for fibromyalgia include both medication and self-care. The emphasis is on minimizing symptoms and improving general health. No one treatment works for all symptoms.

Treatment may include some or all of the following:

People with fibromyalgia need to work with their doctor to come up with a treatment plan that provides the best results.

Although in it neither degenerative nor fatal, the chronic pain of fibromyalgia is pervasive and persistent. Most people with fibromyalgia report that their symptoms do not improve over time. Fibromyalgia is estimated to affect 2–8% of the population. Fibromyalgia may not be diagnosed in up to 75% of affected people.