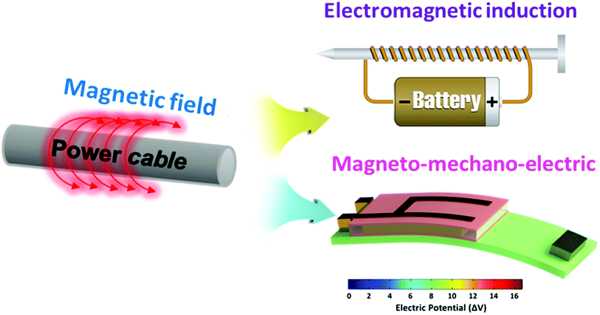 Energy harvesting is a critical technology for maximizing the use of the Earth’s natural resources. This technology, which differs from conventional electric generation technologies such as power plants, harvests existing micro-energy in an environment. Until now, the harvesting of such micro-energies has been limited to the use of light, heat, vibration, electromagnetic fields, and related phenomena. The amount of energy obtained per system as a result of such harvesting methods is small; however, the harvested electric power has the potential to be used to power electronic devices.

Researchers from Osaka City University’s Graduate School of Engineering have succeeded in storing electricity generated by the conversion phenomenon of ferromagnetic resonance (FMR) using an ultra-thin magnetic film of several tens of nanometers.

Prof. Eiji Shikoh oversaw the study. “We are interested in efficiently harvesting energy from the Earth’s natural resources,” the professor says, “and capturing the energy from electromagnetic waves that surround us through the electromotive force (EMF) they generate in magnetic films under FMR shows potential as one such way.” Their findings have been published in the journal AIP Advances.

Researchers have succeeded in storing electricity with the voltage generated from the conversion phenomenon of ferromagnetic resonance (FMR) using an ultra-thin magnetic film of several tens of nanometers.

Ferromagnetic resonance (FMR) is a magnetic phenomenon that controls the magnetization dynamics in a magnetic material using both a static magnetic field (H) and a high-frequency magnetic field in the GHz band. Under FMR, an electromotive force (EMF) is generated in the ferromagnetic metal (FM) film itself, according to spintronics research. The EMF is caused by a number of physical phenomena, including the inverse spin-Hall effect (ISHE) and the anomalous Hall effect.

The EMF generated in the FM film by the FMR must be carefully removed in conventional devices, for example, in spin injection and spin transport experiments by the spin-pumping driven by the FMR. Meanwhile, regardless of the EMF origins, the focus of this study is the EMF generation phenomenon in an FM film under FMR.

“Research has shown that an EMF is generated in a ferromagnetic metal (FM) that is subjected to FMR,” says Yuta Nogi, the study’s first author, “and we investigated energy storage possibilities using two FMs that are highly durable, well understood, and thus commonly used in FMR research – an iron-nickel (Ni80Fe20) and iron-cobalt (Co50Fe50) alloy thin film.”

First, the researchers confirmed that the two alloy films generated electricity via ferromagnetic resonance, discovering that Ni50Fe20 generated approximately 28 microvolts and Co50Fe50 generated approximately 6 microvolts. They used an electron spin resonance device to pressurize the electromagnetic wave and the device’s electromagnet for the static magnetic field to store the electricity. The team observed that after 30 minutes of being in an FMR state, both FM samples successfully stored energy when a storage battery was connected directly to the membrane of the sample via a conductor.

“This is due to the respective magnetic field ranges for FMR excitation,” Prof. Shikoh concludes. When the team investigated the different energy storage characteristics of the thin films, they discovered that when they were in the same thermal states during the experiments, Co50Fe50 could keep FMR in a detuned state, whereas Ni80Fe20 was outside the FMR excitation range. “EMF generation under ferromagnetic resonance can be used as an energy harvesting technology by appropriately controlling the thermal conditions of the FM film,” the professor continues.

Another intriguing aspect of this study is that the team concentrated on EMF generation itself, regardless of its source. This means that, as long as the FMR conditions are met, energy can be stored from electromagnetic waves we encounter on a daily basis, such as the Wi-Fi at your favorite café.