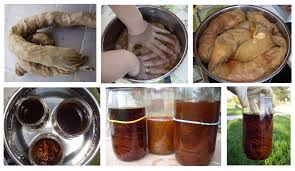 Dyeing is the process of adding color to textile products like fibers, yarns, and fabrics. Dyeing is normally done in a special solution containing dyes and particular chemical material. After dyeing, dye molecules have uncut Chemical bond with fiber molecules. The temperature and time controlling are two key factors in dyeing. There are mainly two classes of dye, natural and man-made.

For most of the thousands of years in which dyeing has been used by humans to decorate clothing, or fabrics for other uses, the primary source of dye has been nature, with the dyes being extracted from animals or plants. In the last 150 years, humans have produced artificial dyes to achieve a broader range of colors, and to render the dyes more stable to resist washing and general use. Different classes of dyes are used for different types of fiber and at different stages of the textile production process, from loose fibers through yarn and cloth to completed garments.

The common dyeing process of cotton yarn with reactive dyes at package form is as follows:

After this process, the dyed yarn packages are packed and delivered.

A dye is a colored substance that has an affinity to the substrate to which it is being applied. The dye is generally applied in an aqueous solution, and requires a mordant to improve the fastness of the dye on the fiber.

Both dyes and pigments appear to be colored because they absorb some wavelengths of light more than others. In contrast with a dye, a pigment generally is insoluble, and has no affinity for the substrate. Some dyes can be precipitated with an inert salt to produce a lake pigment, and based on the salt used they could be aluminum lake, calcium lake or barium lake pigments.

Dyed flax fibers have been found in the Republic of Georgia dated back in a prehistoric cave to 36,000 BP. Archaeological evidence shows that, particularly in India and Phoenicia, dyeing has been widely carried out for over 5000 years. The dyes were obtained from animal, vegetable or mineral origin, with no or very little processing. By far the greatest source of dyes has been from the plant kingdom, notably roots, berries, bark, leaves and wood, but only a few have ever been used on a commercial scale.

The first human-made (synthetic) organic dye, mauveine, was discovered serendipitously by William Henry Perkin in 1856. Many thousands of synthetic dyes have since been prepared.

Synthetic dyes quickly replaced the traditional natural dyes. They cost less, they offered a vast range of new colors, and they imparted better properties to the dyed materials.[5] Dyes are now classified according to how they are used in the dyeing process.

Acid dyes are water-soluble anionic dyes that are applied to fibers such as silk, wool, nylon and modified acrylic fibers using neutral to acid dye baths. Attachment to the fiber is attributed, at least partly, to salt formation between anionic groups in the dyes and cationic groups in the fiber. Acid dyes are not substantive to cellulosic fibers. Most synthetic food colors fall in this category.

Basic dyes are water-soluble cationic dyes that are mainly applied to acrylic fibers, but find some use for wool and silk. Usually acetic acid is added to the dyebath to help the uptake of the dye onto the fiber. Basic dyes are also used in the coloration of paper.

Direct or substantive dyeing is normally carried out in a neutral or slightly alkaline dyebath, at or near boiling point, with the addition of either sodium chloride (NaCl) or sodium sulfate (Na2SO4). Direct dyes are used on cotton, paper, leather, wool, silk and nylon. They are also used as pH indicators and as biological stains.

Mordant dyes require a mordant, which improves the fastness of the dye against water, light and perspiration. The choice of mordant is very important as different mordants can change the final color significantly. Most natural dyes are mordant dyes and there is therefore a large literature base describing dyeing techniques. The most important mordant dyes are the synthetic mordant dyes, or chrome dyes, used for wool; these comprise some 30% of dyes used for wool, and are especially useful for black and navy shades. The mordant, potassium dichromate, is applied as an after-treatment. It is important to note that many mordants, particularly those in the heavy metal category, can be hazardous to health and extreme care must be taken in using them.

Vat dyes are essentially insoluble in water and incapable of dyeing fibres directly. However, reduction in alkaline liquor produces the water soluble alkali metal salt of the dye, which, in this leuco form, has an affinity for the textile fibre. Subsequent oxidation reforms the original insoluble dye. The color of denim is due to indigo, the original vat dye.

Reactive dyes utilize a chromophore attached to a substituent that is capable of directly reacting with the fibre substrate. The covalent bonds that attach reactive dye to natural fibers make them among the most permanent of dyes. “Cold” reactive dyes, such as Procion MX, Cibacron F, and Drimarene K, are very easy to use because the dye can be applied at room temperature. Reactive dyes are by far the best choice for dyeing cotton and other cellulose fibers at home or in the art studio.

Disperse dyes were originally developed for the dyeing of cellulose acetate, and are water insoluble. The dyes are finely ground in the presence of a dispersing agent and sold as a paste, or spray-dried and sold as a powder. Their main use is to dye polyester but they can also be used to dye nylon, cellulose triacetate, and acrylic fibres. In some cases, a dyeing temperature of 130 °C is required, and a pressurised dyebath is used. The very fine particle size gives a large surface area that aids dissolution to allow uptake by the fibre. The dyeing rate can be significantly influenced by the choice of dispersing agent used during the grinding.

Azoic dyeing is a technique in which an insoluble azo dye is produced directly onto or within the fibre. This is achieved by treating a fibre with both diazoic and coupling components. With suitable adjustment of dyebath conditions the two components react to produce the required insoluble azo dye. This technique of dyeing is unique, in that the final color is controlled by the choice of the diazoic and coupling components. This method of dyeing cotton is declining in importance due to the toxic nature of the chemicals used.

Sulfur dyes are two part “developed” dyes used to dye cotton with dark colors. The initial bath imparts a yellow or pale chartreuse color, This is aftertreated with a sulfur compound in place to produce the dark black we are familiar with in socks for instance. Sulfur Black 1 is the largest selling dye by volume.

One other class that describes the role of dyes, rather than their mode of use, is the food dye. Because food dyes are classed as food additives, they are manufactured to a higher standard than some industrial dyes. Food dyes can be direct, mordant and vat dyes, and their use is strictly controlled by legislation. Many are azo dyes, although anthraquinone and triphenylmethane compounds are used for colors such as green and blue. Some naturally-occurring dyes are also used.

A number of other classes have also been established, including:

By the nature of their chromophore, dyes are divided into:[8]

The process “vat dyeing” refers to dyeing in a bucket or vat. It can be performed whenever a liquid, even shade over the entire garment is desired. Almost any dye can be used, including fiber reactive dyes, direct dyes, and acid dyes. One alternative to vat dyeing is direct dye application, such as the process used for tie dyeing. “Vat dyes” are a special class of dyes that work with a special chemistry. Cotton, wool, and other fibers can be all dyed with vat dyes. Note that not all vat dyeing is done with vat dyes.

Most vat dyes are less suitable than fiber reactive dyes for the home dyers, as they are difficult to work with; they require a reducing agent to solubilize them. The dye is soluble only in its reduced (oxygen-free) form. The fiber is immersed repeatedly in this oxygen-free dyebath, then exposed to the air, whereupon the water-soluble reduced form changes color as oxygen turns it to the water-insoluble form. Indigo is an example of this dye class; it changes from yellow, in the dyebath, to green and then blue as the air hits it.

Inkodye is a type of vat dye which uses light rather than oxygen to ‘fix’ the dye, with a wide variety of possible effects. These dyes, which are chemically similar to vat dyes, are developed by light instead of being applied in an oxygen-free bath and being developed in the fabric by exposure to oxygen. Inkodyes are true dyes, not fabric paints. A dye itself attaches to the fabric; fabric paint includes a glue-like binder, which imparts a stiffer feeling to the fabric. The process is more difficult than the process of tie-dyeing with fiber reactive dyes.

PRO Chemical & Dye, which sells some vat dyes, provides instructions online for Immersion Dyeing using PRO Vat Dyes. The process requires the use of lye (sodium hydroxide), which must be used with due care, including the use of safety goggles.

Indigo is subject to major crocking (rubbing the dye off onto other items) unless it is applied carefully. This means use a weaker dyebath, and dipping many times, rather than a single strong dipping.

Application of vat dyestuff is not so easy like direct or reactive dyes. The application involves a lot of chemistry – such as oxidation, reduction, pH control and so on. Even the dissolution of the dyestuff involves a great technique of reduction using adequate quantities of caustic soda and sodium hydrosulphite.

There are several methods available for the application of vat dyes to yarn and fabric.

The Vat dyes are having all around fastness properties which cannot be possible in any class of dyes .the only problem in this class is slightly poor rubbing fastness.which can be increased by special after treatment.

Indigo is a vat dye that has been used around the world for many centuries.

Vital Step before much Cutting Production