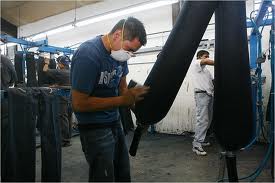 Assignment on Denim washing in Apparel

The technology which is used to modify the appearance, out look comfort ability & fashion of the garments is called garment washing.

Since 1978, garments pre washing has become more and more popular. It began with denim jeans for the following reasons,

1)      Before garments pre washing was done on jeans, consumers had to wash them at home before wearing them because before washing they were too stiff, too long and too big to wear.

2)      After pre washing, the consumers do not have to worry about the fit after they wash them as pre washing has taken away almost all the shrinkage and made the jeans stable.

YPES OF CHEMICAL USE IN WASHING PLANT:

Denim is a twill-weave woven & 100% cotton fabric that uses different colors for the warp and weft. One color is predominant on the fabric surface. Denim wears well and resists snags and tears. It is available in different weights and is usually made of cotton, although hemp denim is also available. Denim is commonly used for jeans and work clothes, as well as for casings for organic futons and pillows.

Denim are dye by indiga dye:

Indigo, or indigotin, is a dyestuff originally extracted from the varieties of the indigo and woad plants. Indigo was known throughout the ancient world for its ability to color fabrics a deep blue. Egyptian artifacts suggest that indigo was employed as early as 1600 B.C. and it has been found in Africa, India, Indonesia, and China.

The dye imparts a brilliant blue hue to fabric. In the dying process, cotton and linen threads are usually soaked and dried 15-20 times. By comparison, silk threads must be died over 40 times. After dying, the yarn may be sun dried to deepen the color. Indigo is unique in its ability to impart surface color while only partially penetrating fibers. When yarn died with indigo is untwisted, it can be seen that the inner layers remain uncolored. The dye also fades to give a characteristic wom look and for this reason it is commonly used to color denim. Originally extracted from plants, today indigo is synthetically produced on an industrial scale. It is most commonly sold as either a 100% powder or as a 20% solution

Enzymes are proteins Bio catalyze.Its has huge life cell  .The cell is the basic structural and functional unit of all known living organisms. It is the smallest unit of life that is classified as a living thing, and is often called the building block of life.Some organisms, such as most bacteria, are unicellular (consist of a single cell). Other organisms, such as humans, are multicellular. (Humans have an estimated 100 trillion or 1014 cells; a typical cell size is 10 µm; a typical cell mass is 1 nanogram.) The largest known cell is an unfertilized ostrich egg cell.In enzymatic reactions, the molecules at the beginning of the process are called substrates, and the enzyme converts them into different molecules, called the products. Almost all processes in a biological cell need enzymes to occur at significant rates. Since enzymes are selective for their substrates and speed up only a few reactions from among many possibilities, the set of enzymes made in a cell determines which metabolic pathways occur in that cell.

As all catalysts, enzymes do not alter the position of the chemical equilibrium of the reaction. Usually, in the presence of an enzyme, the reaction runs in the same direction as it would without the enzyme, just more quickly. However, in the absence of the enzyme, other possible uncatalyzed, “spontaneous” reactions might lead to different products, because in those conditions this different product is formed faster.

Enzymes catalyze the forward and backward reactions equally. They do not alter the equilibrium itself, but only the speed at which it is reached. For example, carbonic anhydrase catalyzes its reaction in either direction depending on the concentration of its reactants.

Nevertheless, if the equilibrium is greatly displaced in one direction, that is, in a very exergonic reaction, the reaction is effectively irreversible. Under these conditions the enzyme will, in fact, only catalyze the reaction in the thermodynamically allowed direction.

Enzyme wash is more popular in present world textile industries. Enzymes are bio chemical substances that are have as catalysts toward specific reactions.  What makes very interesting the enzymes under a chemicals point of view is their high specificity or in other words, their ability to attack selectively on to a substrate.

After enzyme washing we get thise change:

Enzyme is suitable for environment .Enzyme is not hazardous but bleach is hazardous process. So enzyme is popular in washing sectors.

A bleach is a chemical that removes colors or whitens, often via oxidation. Common chemical bleaches include household chlorine bleach, a solution of approximately 3–6% sodium hypochlorite (NaClO), and oxygen bleach, which contains hydrogen peroxide or a peroxide-releasing compound such as sodium perborate, sodium percarbonate, sodium persulfate, tetrasodium pyrophosphate, or urea peroxide together with catalysts and activators, e.g. tetraacetylethylenediamine and/or sodium nonanoyloxybenzenesulfonate. To bleach something is to apply bleach, sometimes as a preliminary step in the process of dyeing. Bleaching powder is calcium hypochlorite.

Many bleaches have strong bactericidal properties, and are used for disinfecting and sterilizing. Most bleaches are hazardous if ingested or inhaled, and should be used with care.

Hypochlorite and chlorine are in equilibrium in water; the position of the equilibrium is pH dependent and low pH (acidic) favors chlorine

Chlorine is a respiratory irritant that attacks mucous membranes and burns the skin. As little as 3.53 ppm can be detected as an odor, and 1000 ppm is likely to be fatal after a few deep breaths. Exposure to chlorine has been limited to 0.5 ppm (8-hour time-weighted average—38 hour week) by OSHA in the U.S

Sodium hypochlorite and ammonia react to form a number of products, depending on the temperature, concentration, and how they are mixed. The main reaction is chlorination of ammonia, first giving chloramine (NH2Cl), then dichloramine (NHCl2) and finally nitrogen trichloride (NCl3). These materials are very irritating to eyes and lungs and are toxic above certain concentrations. Lastly there is bleach containing sodium perchlorate.

Additional reactions produce hydrazine, in a variation of the Olin Raschig process.

The hydrazine generated can further react with the monochloramine in an exothermic reaction.

Industrial bleaching agents can also be sources of concern. For example, the use of elemental chlorine in the bleaching of wood pulp produces organochlorines, persistent organic pollutants, including dioxins. According to an industry group, the use of chlorine dioxide in these processes has reduced the dioxin generation to under detectable levels.However, respiratory risk from chlorine and highly toxic chlorinated byproducts still exists.

The process of bleaching can be summarized in the following set of chemical reactions:

The H+ ion of the hypochlorous acid then dissolves into solution, and so the final result is effectively:

Hypochlorite tends to decompose into chloride and a highly reactive form of oxygen:

This oxygen then reacts with organic substances to produce bleaching or antiseptic effects.

Color in most dyes and pigments is produced by molecules, such as beta carotene, which contain chromophores. Chemical bleaches work in one of two ways

This way be considered as a preparatory process of mercerizing ,dyeing, or printing .therefore proper bleaching should be carried out other wish the subsequent process would be fault.

This reaction having an activation energy of 20 kcal/mole. It is a very fast reaction.

Degradation of cotton by bleach:

When the cotton cellulose is treated with an aqueous solution of solution hypochlorite the decomposition of the hypochlorite takes place by different reactions:

Oxidation potential of the bleaching agent:

Oxidizing agents may be arranged in the increasing order of their oxidizing ability as following:

It is well established that aqueous solution under alkaline condition are extremely stable, especially when stored away from light . As a result , alkaline solutions of sodium chlorite are rarely used f or beaching purposes .The solutions are activated by lowering the pH ,when their bleaching ability (oxidising power) is increased tremendously .These solution are decomposed by various reaction ,such as chlorine dioxide evolution ,chlorate formation and oxygen evolution and their relative extents depends on the pH .

The process of bleaching can be summarized in the following set of chemical reactions:

The H+ ion of the hypochlorous acid then dissolves into solution, and so the final result is effectively:

Color in most dyes and pigments are produced by molecules, such as beta carotene, which contain chromophores. Chemical bleaches work in one of two ways:

Oxidizing bleach works by breaking the chemical bonds that make up the chromophore. This changes the molecule into a different substance that either does not contain a chromophore, or contains a chromophore that does not absorb visible light.

After bleach washing we get thise change:

Finally, in denim washing our country has a bright future due to wide spread market of denim garments. We need thorough knowledge on denim treatment process and also on the fashion going around the world. And this project will be a guideline for them who are interested in the sector. pioneer in the field of hard washing. And we believe that this project will be a guideline for the washing plants in understanding and doing various treatments.