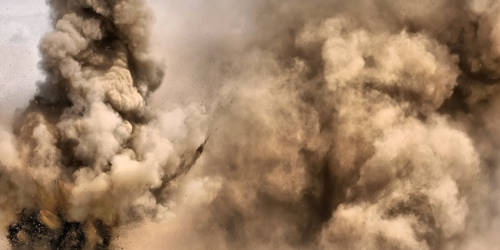 A dust explosion is the rapid combustion of fine particles suspended in the air within an enclosed location. It occurs when combustible dust builds up in the air and combust rapidly, causing a strong pressure wave to form. When the dust is disturbed and under certain circumstances, there is the potential for a serious explosion to occur. Dust explosions almost always lead to serious financial losses in terms of damage to facilities and downtime. They also often cause serious injuries to personnel and fatalities.

Dust explosions can occur where any dispersed powdered combustible material is present in high-enough concentrations in the atmosphere or other oxidizing gaseous medium, such as pure oxygen. They are a deadly hazard in a variety of workplaces, from grain silos to plastics factories. In cases when fuel plays the role of combustible material, the explosion is known as a fuel-air explosion. They can happen in a variety of work situations, as combustible dust can be made from many different types of material, including metals. Dust explosion prevention is also considered by the standards of other safety organizations.

Dust explosions are a frequent hazard in coal mines, grain elevators, and other industrial environments. They are also commonly used by special effects artists, filmmakers, and pyrotechnicians, given their spectacular appearance and ability to be safely contained under certain carefully controlled conditions. A dust explosion requires several factors to be present at once. These include – Combustible dust at the right concentration level, An enclosed space and An ignition source.

A dust explosion can blow out walls in a facility and kill or injure workers within the space or nearby. Thermobaric weapons utilize this principle by rapidly saturating an area with an easily combustible material and then igniting it to produce explosive force. These weapons are the most powerful non-nuclear weapons in the world. Combustible dust explosions have caused numerous workplace injuries and deaths and can destroy entire buildings. Dust explosions occur due to the rapid ignition of the material that forms the dust cloud.