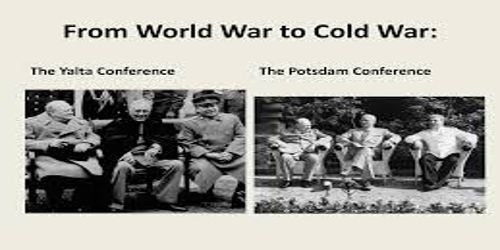 Differences between Yalta and Potsdam

Differences between Yalta and Potsdam

The conference at Yalta took place from February 4-11, 1945. Yalta is located on the southern coast of Ukraine. The “Big Three” at Yalta were US President Franklin Delano Roosevelt, Soviet Premier Joseph Stalin, and British Prime Minister Winston Churchill. Coming into the conference the Soviet Union held the strongest military position in Europe. They controlled Rumania, Bulgaria, and most of Poland and Hungary, Yugoslavia, and Czechoslovakia, and had moved within 100 miles of Berlin.

The Potsdam Conference took place in Germany, from July 17-August 2, 1945. The “Big Three” nations were once again represented, though their leaders had changed. Stalin was there, but Truman had become President when Roosevelt died in April. Churchill was there to begin the conference, but he was replaced when Clement Atlee was elected Prime Minister in the middle of the conference on July 26. Many things from the Yalta Conference came up, including the occupation of Germany and reparations. Also discussed were plans for war crime trials, and a possible surrender by Japan. 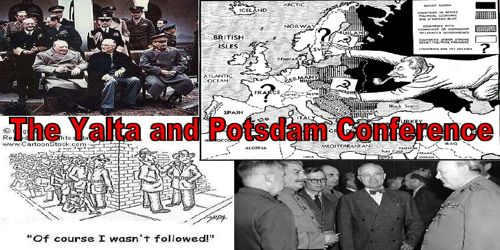 Yalta and Potsdam – the basics

Yalta – February 1945: Germany was not yet defeated, so, although there were tensions about Poland, the big three – Stalin, Roosevelt and Churchill – managed to agree to split Germany into four zones of occupation, and to allow free elections in Eastern European countries. Russia was invited to join the United Nations, and Russia promised to join the war against Japan when Germany was defeated.

Potsdam – July 1945: Germany had been defeated, Roosevelt had died and Churchill had lost the 1945 election – so there were open disagreements. Truman came away angry about the size of reparations and the fact that a communist government was being set up in Poland. Truman did not tell Stalin that he had the atomic bomb.

It will help if you are able to describe the huge differences between Yalta and Potsdam – the issues were the same, but the goodwill to overcome them was gone, because the countries no longer needed to stick together. Note how not all the broken promises were by Stalin:

Comparison of Yalta and Potsdam 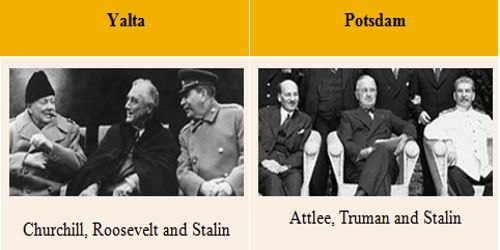