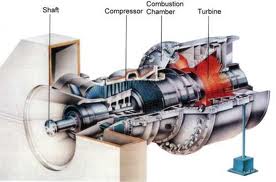 Gas turbine power plant has relatively low cast and can be quickly put into commision.it requires less space. This plant is of smaller capacity and mainly used for peak load service. Gas turbine power plants are very promising for region where liquid or gaseous fuel is available in large quantities. Gas turbine installations require only a fraction of water used by their steam turbine counterparts. Gas turbine has made rapid progress during the past decade due mainly to the large amount of research. The size of gas turbine plants used in a large size used is about 50 MW. the thermal efficiency of gas turbine plant is about 22% to 25%.

The schematic arrangement (Fig. a) of a gas turbine power station can be divided into the following stages: 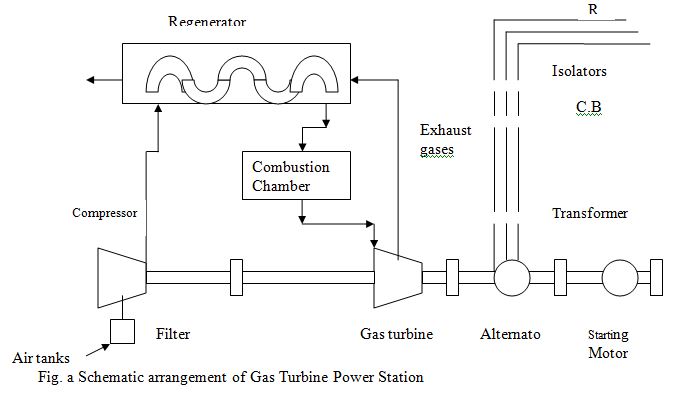 A 5oC change in inlet air temperature varies efficiency by about 3% and output by about 4% in open cycle plant. 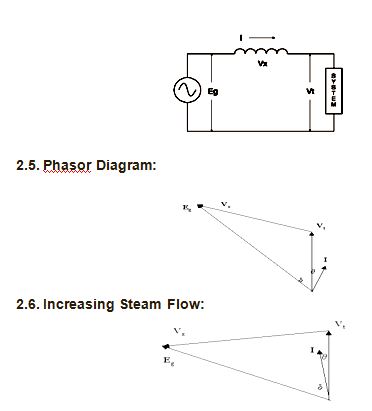 A gas turbine extracts energy from a flow of hot gas produced by combustion of gas or fuel oil in a stream of compressed air. It has an upstream air compressor (radial or axial flow) mechanically coupled to a downstream turbine and a combustion chamber in between. “Gas turbine” may also refer to just the turbine element.Energy is released when compressed air is mixed with fuel and ignited in the combustor. The resulting gases are directed over the turbine’s blades, spinning the turbine, and mechanically powering the compressor. Finally, the gases are passed through a nozzle, generating additional thrust by accelerating the hot exhaust gases by expansion back to atmospheric pressure.Energy is extracted in the form of shaft power, compressed air and thrust, in any combination, and used to power aircraft, trains, ships, electrical generators, and even tanks.