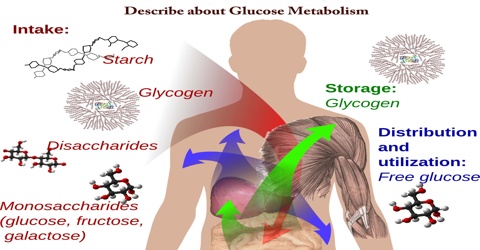 Diabetes is diagnosed when a person has too much glucose (sugar) in the blood. This happens because the pancreas cannot make enough insulin. Diabetes is the condition in which the body does not properly process food for use as energy. Most of the food we eat is turned into glucose, or sugar, for our bodies to use for energy. The pancreas, an organ that lies near the stomach, makes a hormone called insulin to help glucose get into the cells of our bodies. When anyone has diabetes, their body either doesn’t make enough insulin or can’t use its own insulin as well as it should. This causes sugars to build up in their blood. This is why many people refer to diabetes as “glucose (sugar).”

The first series of reactions does not require oxygen and is referred to as (anaerobic) glycolysis or glucose fermentation, yielding two molecules of the three‐carbon compound pyruvic acid. Under anaerobic conditions this can be reduced to lactic acid. Pyruvic acid is normally oxidized to acetyl CoA, which is then oxidized to carbon dioxide and water in a series of reactions known as the citric acid or Krebs cycle. Both glycolysis and the citric acid cycle are linked to the formation of ATP from ADP and phosphate, as a metabolically usable energy source.

Sugar or Glucose metabolism is the process of turning the energy from the foods we eat into fuel our body’s cells need to grow and function. If anyone has diabetes, they have a problem with insulin, which is an important hormone in sugar metabolism. The metabolism process is as follows:

If anyone has diabetes, their body has problems producing insulin, responding to insulin, or both. When insulin is not working as it should, blood sugar can build up, eventually spilling over into their urine. This can lead to diabetes symptoms such as increased urination and unexplained weight loss, since their body isn’t able to use the energy from the foods they eat. If left uncontrolled, diabetes can cause their blood sugar levels to become dangerously high, which can result in serious health conditions, diabetic coma, or even death. In type 1 diabetes, their immune system mistakenly makes antibodies that attack the insulin-producing cells in their pancreas, resulting in little or no insulin production. People with type 1 diabetes need to take insulin injections every day so that their bodies are able to process blood sugar.

Overweight people with either pre-diabetes or type 2 diabetes most typically produces significantly more insulin than non-diabetic people resulting from a higher ratio of body fat to muscle. The reason for this is insulin resistance, which means that the body can’t use its insulin effectively enough.

Therefore, it makes sense that the body should produce more insulin to compensate.

However, the strain of producing all this extra insulin means that the beta cells become over worked and over time will start to fail. In addition, the increasing amounts of insulin in the body cause the body to become gradually more resistant to it – it can be viewed as being similar to how drug addicts can build up tolerances to drugs.

If insulin resistance exists, this therefore reduces the effectiveness of the phase 1 insulin response as discussed in non-diabetics. The pancreas will release all the insulin it has but it likely won’t be enough because the insulin is less effective. To cope with this, the body has to rely on its phase 2 insulin responses, however, this takes some time and therefore in that time, without sufficient insulin available, blood sugar (glucose) levels in the type 2 diabetic or pre-diabetic are very likely to rise higher than normal.