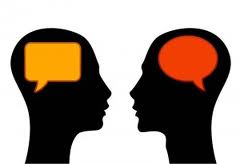 Communication is giving, receiving or exchanging ideas, information, signals or messages through appropriate media, enabling individuals or groups to persuade, to seek information, to give information or to express emotions.

The definition of communication is shared in the Webster’s Dictionary as “sending, giving, or exchanging information and ideas,” which is often expressed non verbally and verbally.

Non-verbal communication is the act of speaking without using words. Examples of this include facial gestures (smiling, frowning), body language (arms crossed, giving someone the “finger”, legs shaking resembling nervousness, sitting upright giving someone their full attention), and the impression you give to others with your appearance (dress, body image, body odor).

Also, the tone of your voice can be expressed non-verbally. For instance, if you are saying one thing, but your tone of voice is saying another, then that reflects how you are truly feeling without speaking a word about it (yelling and crying while saying your okay).

Verbal communication is the act of speaking by using words. Examples of this include using different forms of language (i.e., written, voice, sign language). This form of communication can be taken for granted..such as saying regretful things and opening your mouth before thinking about what you are saying.