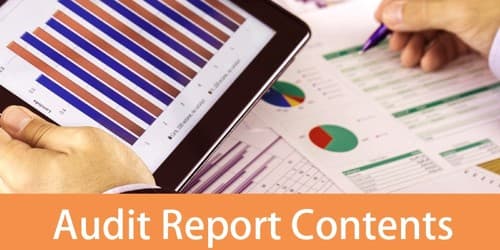 Contents of the Audit Report

The auditor should check the books of accounts and balance sheet and need to prepare the audit report addressing to the shareholders and present it to the concerned department and to the company.  An audit report is always critical to influencing the perceived value of any financial statement’s audit. Copy of such report should be sent to all the shareholders. Generally, the Auditor’s report is published with the Annual report of the Company. The audit report should contain the following things.

In addition to the above facts, an auditor should include other facts using his own discretion. Other facts which are to be incorporated in the report are given below:

If auditor detects any frauds and errors during the course of an audit, he must include in an audit report clearly stating their effect on financial statements. Like regarding the valuation of stock, depreciation system demarcation of capital and revenue, etc.