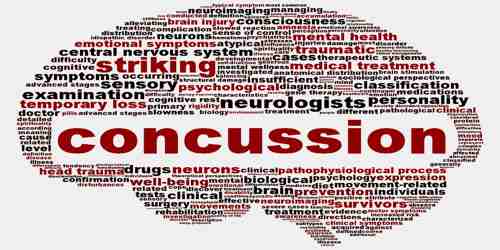 Concussion is an injury to a soft structure, especially the brain, produced by a violent blow or impact and followed by a temporary, sometimes prolonged, loss of function. A concussion of the brain results in transient loss of consciousness or memory. It is also known as minor head trauma or mild traumatic brain injury (mTBI). In general, the signs can be categorized into physical signs (such as loss of consciousness or amnesia), behavioral changes (such as irritability), cognitive impairment (such as slowed reaction times), and sleep disturbances. Fewer than 10% of sports-related concussions among children are associated with loss of consciousness. 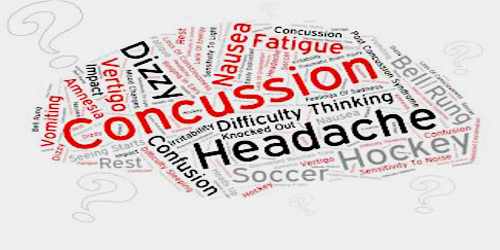 A brain concussion can cause immediate but temporary impairment of brain functions, such as thinking, vision, equilibrium, and consciousness. After a person has had a concussion, he or she is at increased risk for recurrence. Moreover, after a person has several concussions, less of a blow can cause injury, and the person can require more time to recover.

It usually only lasts up to few days or weeks, although it sometimes needs emergency treatment and some people can have longer-lasting problems.

There are many ways to get a concussion. Some common ways include fights, falls, playground injuries, car crashes, and bike accidents. Concussions can also happen while participating in any sport or activity such as football, boxing, hockey, soccer, skiing, or snowboarding. 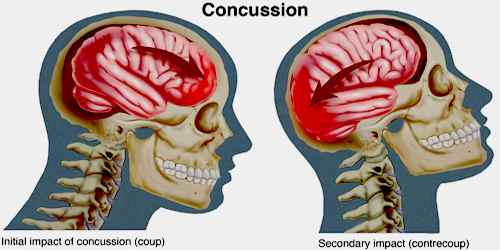 In addition to a blow to the head, concussion may be caused by acceleration forces without a direct impact, and on the battlefield, MTBI is a potential consequence of nearby explosions. It is not clear exactly what damage is done and how the symptoms are caused, but stretching of axons and changes in ion channels are involved. Cellular damage has reportedly been found in concussed brains, but it may have been due to artifacts from the studies. It is currently thought that structural and neuropsychiatric factors may both be responsible for the effects of concussion.

Signs of a concussion usually appear within a few minutes or hours of a head injury. But occasionally they may not be obvious for a few days, so it’s important to look out for any problems in the days following a head injury. 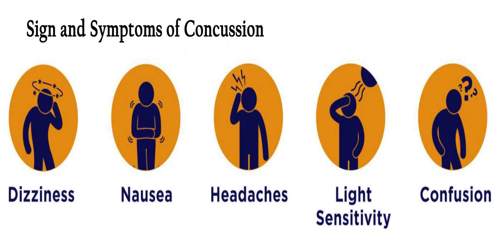 Concussion can be harder to spot in babies and young children. It can result in changes in mood including crankiness, loss of interest in favorite activities or items, tearfulness, and displays of emotion that are inappropriate to the situation. Common symptoms in concussed children include restlessness, lethargy, and irritability.

Diagnosis and Treatments of Concussion

Any person who may have had a concussion needs to see a doctor. If a doctor thinks that you have a concussion, he or she will ask questions about the injury. Neuropsychological tests have become more widely used after a concussion. Concussion may be under-diagnosed because of the lack of the highly noticeable signs and symptoms while athletes may minimize their injuries to remain in the competition. A retrospective survey in 2005 suggested that more than 88% of concussions are unrecognized.

Diagnosis can be complex because concussion shares symptoms with other conditions. For example, post-concussion symptoms such as cognitive problems may be misattributed to brain injury when, in fact, due to post-traumatic stress disorder (PTSD). 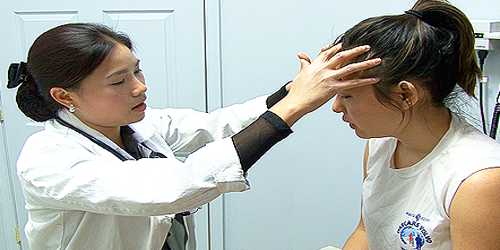 After being seen by a doctor, some people have to stay in the hospital to be watched. Others can go home safely. People who go home still need to be watched closely for warning signs or changes in behavior.

Physical and cognitive rest should be continued until all symptoms have resolved with most (80–90%) concussions resolving in seven to ten days, although the recovery time may be longer in children and adolescents. Medications may be prescribed to treat sleep problems and depression. Analgesics such as ibuprofen can be taken for headache, but paracetamol (acetaminophen) is preferred to minimize the risk of intracranial hemorrhage. Concussed individuals are advised not to use alcohol or other drugs that have not been approved by a doctor as they can impede healing. Activation database-guided EEG biofeedback has been shown to return the memory abilities of the concussed individual to levels better than the control group.

There’s no guaranteed way to prevent concussion, but there are some simple things you can do that may reduce your risk of a head injury. 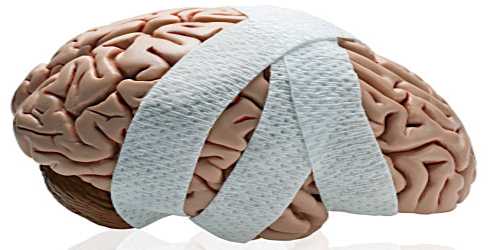 It’s important to avoid head injuries as repeated concussions or blows to the head have been linked to serious problems, including a brain condition called chronic traumatic encephalopathy.