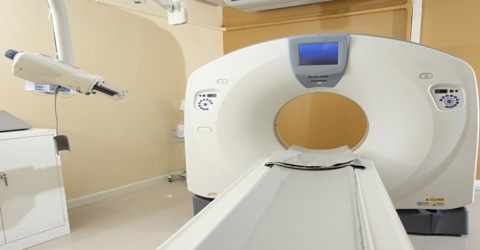 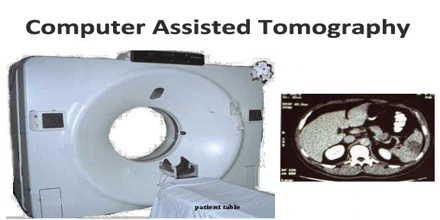 Computer Assisted Tomography (CAT) scan is a diagnostic test that enables the spinal canal to be imaged and assessed for specific conditions. The scan works by shooting an x-ray beam at 160 points throughout the body and crystals opposite the beam pick up and record the absorption rates of the varying thicknesses of tissue and bone.

A computer is used to reformat the image into cross sections of the spine. CT scans provide excellent visualization of bony detail and a three-dimensional perspective, and are very useful for assessing fractures and soft tissue structures not visible through conventional radiography.

When combined with a myelogram, a dye injected into the area of the spine being examined, CT scans provide for excellent detail of spinal nerves.

It is a radiologic imaging modality that uses computer processing to generate an image (CAT scan) of the tissue density in a “slice” as thin as 1 to 10 mm in thickness through the patient’s body. These images are spaced at intervals of 0.5 to 1 cm. Cross-sectional anatomy can be reconstructed in several planes without exposing the patient to additional radiation. 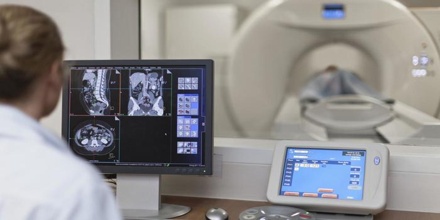 CT or CAT is regarded as a moderate- to high-radiation diagnostic technique. The improved resolution of CT (CAT) has permitted the development of new investigations, which may have advantages; compared to conventional radiography, for example, CT (CAT) angiography avoids the invasive insertion of a catheter. CT (CAT) colonography (also known as virtual colonoscopy or VC for short) is far more accurate than a barium enema for detection of tumors, and uses a lower radiation dose. CT VC is increasingly being used in the UK and US as a screening test for colon polyps and colon cancer and can negate the need for a colonoscopy in some cases.

The radiation dose for a particular study depends on multiple factors: volume scanned, patient build, number and type of scan sequences, and desired resolution and image quality. In addition, two helical CT (CAT) scanning parameters that can be adjusted easily and that have a profound effect on radiation dose are tube current and pitch. Computed tomography (CT) scan has been shown to be more accurate than radiographs in evaluating anterior interbody fusion but may still over-read the extent of fusion.

Tomography in which computer analysis of a series of cross-sectional x-ray images made along a single axis of a bodily structure or tissue is used to construct a three-dimensional image of that structure. The technique is used in diagnostic studies of internal bodily structures, as in the detection of tumors or brain aneurysms.

Tomography used in diagnostic studies of internal bodily structures, in which computer analysis of a series of cross-sectional scans made along a single axis of a bodily structure or tissue is used to construct a three-dimensional image of that structure. Also called computed tomography. 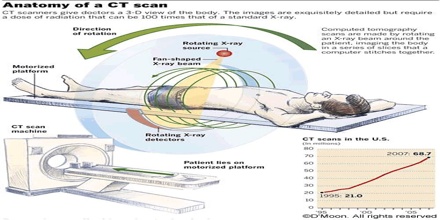 A CAT scan is divided into a square matrix of pixels (picture elements). The newer CAT scanners use a high resolution matrix with 256 × 256 or 512 × 512 pixels. The region of the tissue slice corresponding to a pixel has a cross-sectional area of 1 × 1 mm to 2 × 2 mm; because of the thickness of the slice, it has a finite height and is therefore referred to as a voxel (volume element). This is useful to highlight structures such as blood vessels that otherwise would be difficult to delineate from their surroundings. Using contrast material can also help to obtain functional information about tissues.

A visual representation of the raw data obtained is called a sinogram, yet it is not sufficient for interpretation. Once the scan data has been acquired, the data must be processed using a form of tomographic reconstruction, which produces a series of cross-sectional images. In terms of mathematics, the raw data acquired by the scanner consists of multiple “projections” of the object being scanned. These projections are effectively the Radon transformation of the structure of the object. Reconstruction, essentially involves solving the inverse Radon transformation.

It is usually the first imaging modality in the acute patient, e. g. cerebral bleedings, traumatic injuries or infarctions. Blood supply to the brain tissue (CBF) can be imaged as well as occlusion of cerebral arteries and veins. In addition, a biopsy can be carried out by advancing a puncture needle to the abnormal tissue under CT control. Histological examinations of the biopsy may clarify the differential diagnosis between various kinds of tumours and infections along the skull, neck and spine, and major surgery is no longer necessary. Advancement of puncture needles under CT control is also used to find the right position for injection of local analgetics and cortison for relief of facet joint pain caused or to stabilize fractured vertebrae by injection of bone cement (vertebroplasty). 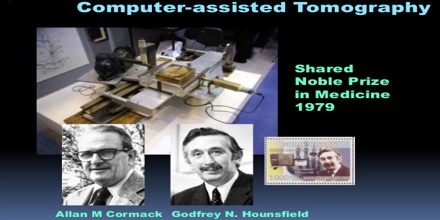 After the first application to human in 1973, G.N. Hounsfield and A.M. Cormack were honoured with the Nobel prize in 1979 for Computer Assisted Tomography. The absorption of x-rays by the body of the patient is measured by detectors and calculated in a slice-wise manner resulting in black-and white images of the different x-ray densities of the tissues. Thus, a computed tomogram usually consists of a number of slices but 3D images can be calculated as well.