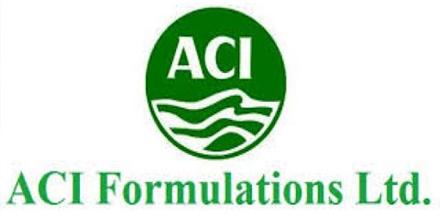 In this competitive world to sustaining in the market and being profitable is necessary. To do so, a company must focus on its marketing strategies and its closest competitors and strategies to generate sales.

ACI Formulations was established in 1995. ACI Agribusiness is the largest integrator in Bangladesh in Agriculture, Livestock and Fisheries and deals with Crop Protection, Seed, Fertilizer, Agri machineries, and Animal Health products. It is also the most profitable business units of ACI Ltd. The secret “Mantra” of being profitable is the efficient use of its Business Strategies and keeping the up to date information about its competitors.

ACI Formulations Ltd. has the full information about the stockiest and retailers in their 11 regions; the information also includes how many products of ACI are they preserving comparing to their competitors. To cope up in such competitive market, ACI CC & PH adopts itself with cost leadership and differentiation strategies. In case of competitor analysis, data collected by the Sales Promotions Officer (SPO) for each region is updated yearly; according to which marketing initiatives are planned.

The purpose of this report is to identify and analyze ACI Formulation’s competitors and describe its core competitive advantages.

ICI Bangladesh Manufacturers Limited was a subsidiary of world renowned multinational ICI Plc and was a listed public limited company under Dhaka Stock Exchange. ACI’s mission is to achieve business excellence through quality by understanding, accepting, meeting and exceeding customer expectations. ACI follows International Standards on Quality Management System to ensure consistent quality of products and services to achieve customer satisfaction. ACI also meets all national regulatory requirements relating to its current businesses and ensures that current Good Manufacturing Practices as recommended by World Health Organization is followed properly. ACI has been accepted as a Founding Member of the Community of Global Growth Companies by the World Economic Forum which is the most prestigious business networking organization.

ACI was so named in 1992. But the history of ACI dates back to 1926, when Imperial Chemical Industries (ICI) was incorporated in the United Kingdom as four companies namely Novel Industries Limited, British Dyestarts Corporation, Brunner Mond and Company Limited and United Alkali Company merged. Since then ICI plc has been operating worldwide as a multinational company.

In the year of formation ICI started operation in the Indian subcontinent in the name of ICI (India) limited. After separation of the India and Pakistan in 1947, the Karachi office of ICI (India) Limited renamed to be ICI (Pakistan) Limited.

Competitor analysis in marketing and strategic management is an assessment of the strengths and weaknesses of current and potential competitors. To analyze competitors, ACI Limited generally focused on their competitors of 11 regions and 87 territories. 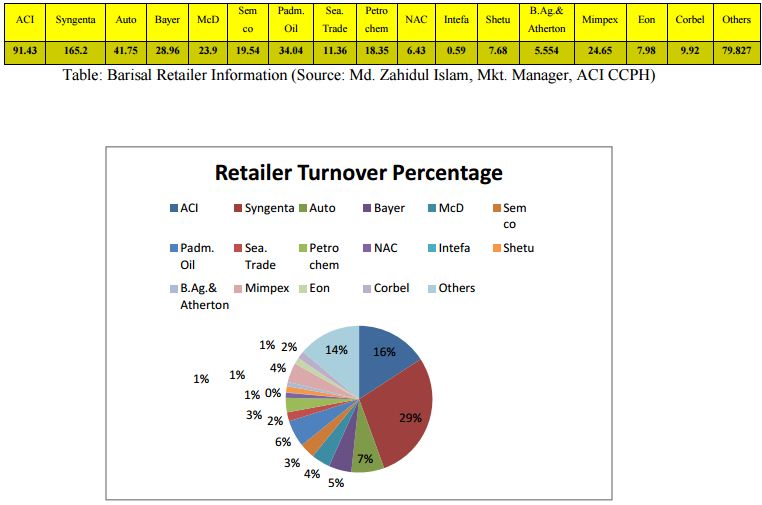 From the information given in this pie chart taken from the survey of total turnover rate of Barisal retailer which represents the turnover rate of Syngenta Limited (29%) is higher than that of ACI limited (16%). So, ACI does not hold the highest retailer share in Barisal region. 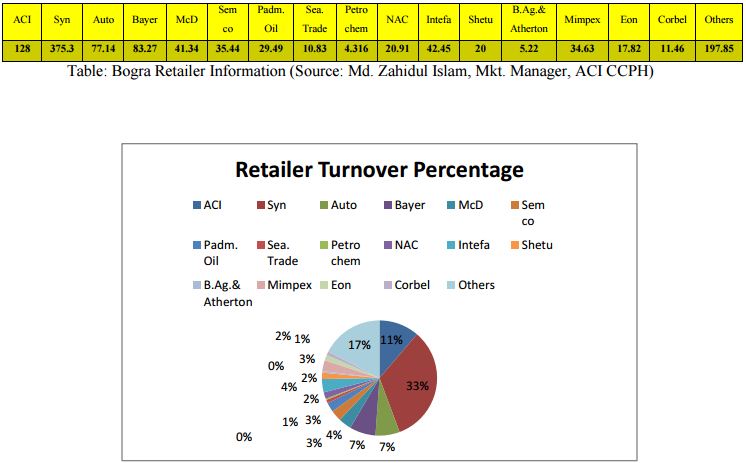 The above piechart shows the percentage distribution of total turnover rate of ACI comparing to its competitors. Here it represents that ACI could not capture the highest turnover rate which is 11%. Among all competitors, the closest one Syngenta Limited, has performed better with the share of 33%. 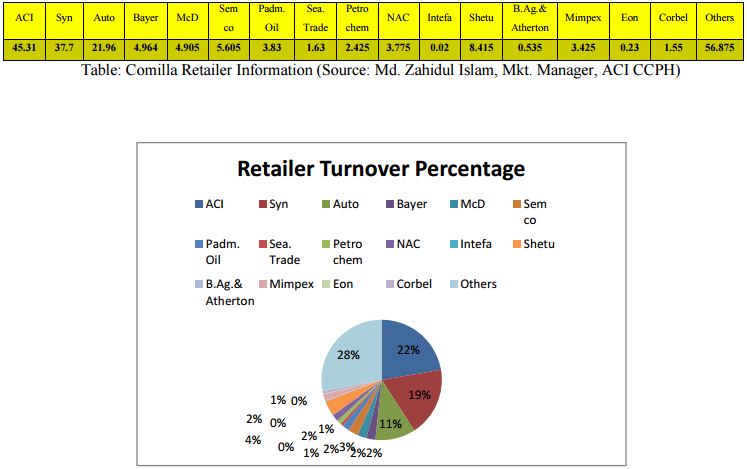 The above piechart shows the percentage distribution of total turnover rate of ACI comparing to its competitors. Here it represents that ACI has captured turnover rate of 22% which is lower than the total amount of share of other small companies (28%). Second closest competitor Syngenta Limited has the share of 19%. 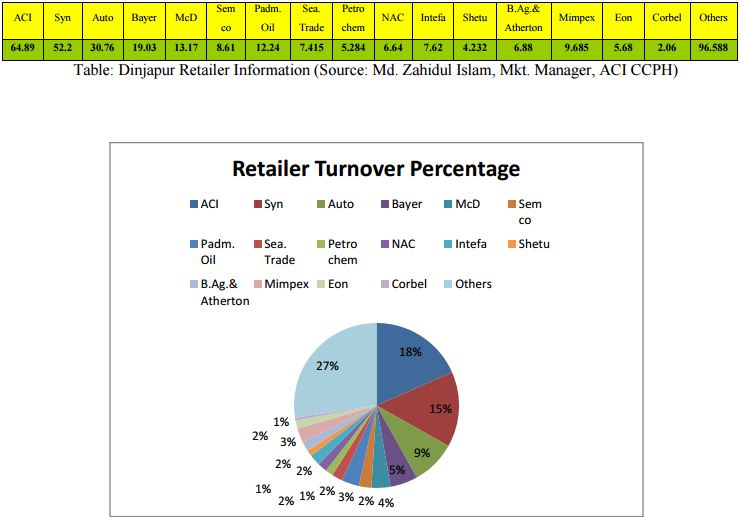 The above piechart shows the percentage distribution of total turnover rate of ACI comparing to its competitors. Here it represents that others share has captured the highest turnover rate which is 27%. Whereas, their second closest competitor Syngenta Limited has the share of 15%. ACI limited has fallen behind with a mere share of 18% 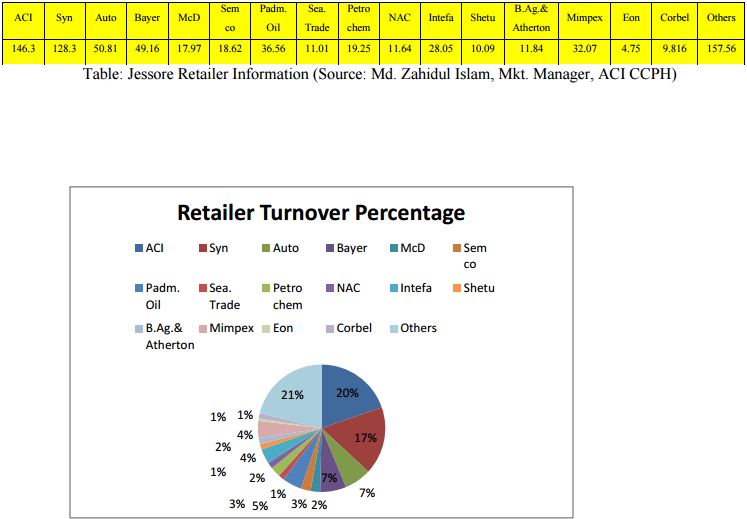 The above piechart shows the percentage distribution of total turnover rate of ACI comparing to its competitors. Here it represents that ACI could not capture the highest turnover rate which is 20%. Other little companies combined share is 21% and syngenta Limited has 17%. So, ACI limited is clearly not the market leader in this territory. 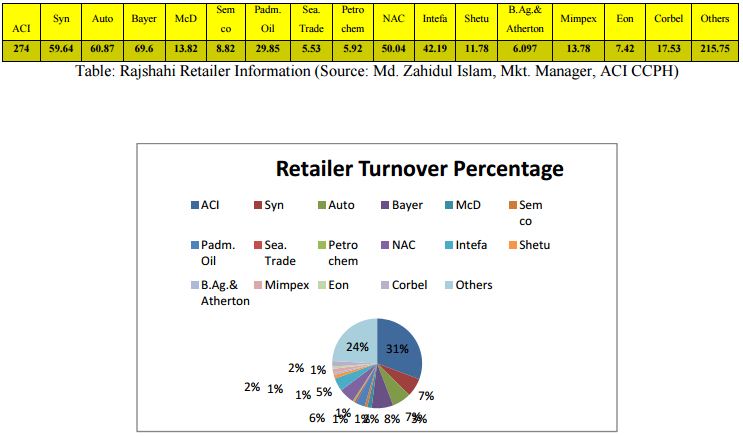 From the information given in this pie chart taken from the survey of total turnover rate of Rajshahi retailer which represents the turnover rate of ACI limited (31%) is higher than any other companies. So, ACI does hold the highest retailer share in this region.

After analyzing above two given sets of information, it is clear that ACI Crop Care could not hold their leading coverage in various stockist zones as they did in the retailer zones. The pricing strategy and other marketing activities of ACI Crop Care have successfully grabbed the attention of their target customer to reach their horizon. As their products’ demand is superior in the retail market, retailers had to purchase more of their products from the stockists, which ultimately reduced the turnover of stockists at the end of the year. If the company can replenish the empty stocks, retailers will be able to sell more of ACI’s products.

Following production concept would help ACI Crop Care to be the leader in stockist zones.

A firm is profitable if the value it commands exceeds the costs involved in creating the product. Creating value for buyers that exceeds the cost of doing so is the goal of any generic strategy. Value, instead of cost, must be used in analyzing competitive position. To succeed competing with others, ACI Limited keeps bringing technological amendments into the company and makes sure all the employees are delivering the best of their potential by rewarding them

Cost leadership is a concept developed by Michael Porter, used in business strategy. It describes a way to establish the competitive advantage. Cost leadership, in basic words, means the lowest cost of operation in the industry. The cost leadership of ACI Limited varies from one business unit to another depending on efficiency, size, scale, scope and cumulative experience of each. ACI Crop Care’s cost leadership strategy aims to exploit scale of production, well defined scope and other economies, producing highly standardized products, using high technology.

Cost leadership is different from price leadership. Among all other competitors, ACI Crop Care’s cost production is one of the lowests, which helps to offer lowest-priced products or services to the target market. So, the company usually has a higher than average profitability than competitors, as already comprehended from the Retailer Information charts. However, ACI Crop Care does compete on price and are very effective at such a form of competition, having a low cost structure and management.

ACI Crop Care’s goal for following cost leadership strategy is to offer products or services at the lowest cost in the industry. The challenge of this strategy is to earn a suitable profit for the company, rather than operating at a loss and draining profitability from all market players.

Companies such as ACI Ltd succeed with this strategy by featuring low prices on key items on which customers are price-aware, Like ACI Salt, Flour, and Mosquito Coil, Spices, Vegetable oil etc while selling other merchandise at less aggressive discounts. Products are created at the lowest cost in the industry. An example is to use space in stores for sales and not for storing excess product.

While working as an Intern in ACI Formulations Ltd, I have identified that ACI mainly follow Cost Leadership and Differentiation strategy.

In economics and marketing, product differentiation is the process of distinguishing a product or service from others, to make it more attractive to a particular target market. This involves differentiating it from competitors’ products as well as a firm’s own products.

Other Competitive advantages that facilitate ACI’s Growth are:

A core competency is fundamental knowledge, ability or expertise in a specific subject area or skill set. The starting point for ACI Crop Care’s core competencies understands that businesses need to have something that customers uniquely value if they’re to make good profits…

Value chain is a high-level model of how businesses receive raw materials as input, add value to the raw materials through various processes, and sell finished products to customers. For conventionally produced pesticides, the entire supply chain of ACI Formulations Limited has evolved to serve the large global supply and retail chains had favored large producers and wholesale markets. While Organic Standards on one hand has introduced new production practices and norms, on other hand it also prescribes norms for post production handling, processing, packaging, supply chain management, retail, etc. Since the production itself is coming from small holders, spread over large geographical areas, the entire value chain now also offers the scope for the viability and sustainability of agri-business of ACI. 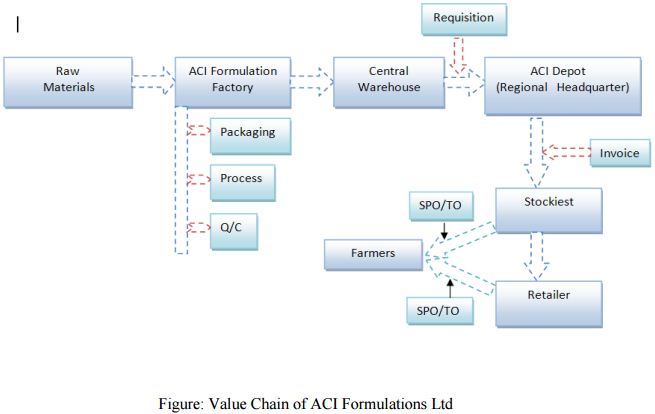 After ACI gets the raw materials with its formula from the foreign company, it assembles its products in ACI Formulation factory. With assembling the products ACI also do packaging, process and quality control. In case of packaging the products “ACI Premiflex” sister concern of ACI usually provides the materials needed for packaging. In case of choosing other company as a supplier of packaging materials, ACI usually selects the lowest bidder from the suppliers.

ACI CC & PH is vastly focused on customer’s database marketing. They have made farmers card projects of 11000 farmers. Each of the cards presents all the information of a particular farmer. Through this card they identify the particular farmer who is occupying more land in a particular territory and use him for the marketing of the product

The another work of this card is to communicate the end user of ACI CC & PH products, what types of crops they usually produce and prescribe them about the use of the fertilizer and pesticides.

Bangladesh is a country with immense agricultural possibilities where ACI Crop Care has already been playing a vital role augmenting opportunities. The company is competitively in more advantageous situation than others because of its long term involvement in agribusiness. While taking various marketing approaches, ACI Crop Care reaches its voluminous number of customers efficiently.

Competitor analysis in marketing and strategic management is an assessment of strengths and weaknesses of current and potential competitors. This analysis provides both aggressive and defensive strategic contexts to identify market opportunities and unknown threats. Multinational companies such as Syngenta despite being a multinational company can be titled as market challenger, has capability to earn more market share. But nothing is enough for business. There is always something to do in the business field which can keep the business competitive. Despite hard competition among all big competitors ACI CC & PH has made tremendous and remarkable progress practically in every sphere of its activities. This success has been made possible due to dynamic leadership of its management as well as devotion and sincerity of all categories executives.

Report on Poultry Industry of Bangladesh