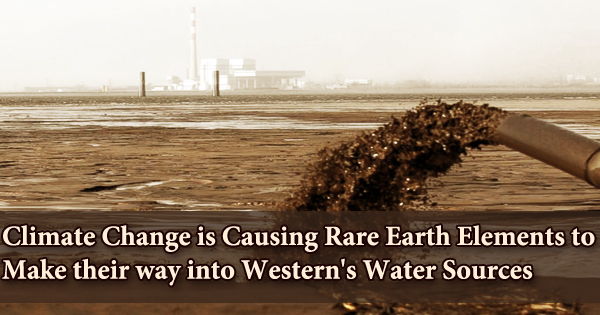 Climate change is causing rare earth elements to make their way into Colorado water sources, according to a recent study published in the journal Environmental Science & Technology. Many computers and other high-tech gadgets, such as mobile phones and hard drives, require rare earth elements. However, it is becoming increasingly clear that they may be dangerous to the environment even at low concentrations.

Study author Diane McKnight, who is an INSTAAR Fellow and engineering professor at the University of Colorado Boulder says, “this is of concern because their concentrations are not monitored and there are no water quality standards set for them.”

Since the 1990s, Diane McKnight has led her students in water quality research in the Snake River watershed of Colorado. Their major objective has been to measure and monitor acid rock discharge. When exposed to air and water, rocks that contain sulfide-based minerals, such as pyrite, oxidize.

Sulfuric acid and dissolved metals such as iron are produced as a result of the chemical reaction, which flow into streams. Acidic water may dissolve heavy metals like lead, cadmium, and zinc even further, and it turns out that it can also transport rare earth elements.

“What really controls the mobility of rare earth elements is pH. Acid literally leaches it out of the rocks,” says first author Garrett Rue, who earned a masters degree studying limnology with McKnight and a subsequent PhD from CU Boulder.

With its pyrite-rich geology, acid rock drainage occurs naturally throughout the western United States. However, old mines that disrupt vast volumes of rocks and dirt speed up the process and pollute water downstream.

Acid mine drainage-affected cities in the Snake River watershed have been forced to adjust to poor water quality. Some former mining boomtowns, such as Silverton, have to import water from far away. Others rely on costly water purification facilities.

Because the water in the Snake River is too high in zinc for any natural fish species to thrive, all fish are supplied. The problem is endemic to the western United States, says Rue: “Upwards of forty percent of the headwaters to major rivers in the West are contaminated by some form of acid mine or rock drainage.”

Because the Peru Creek portion of the watershed was intensively mined and the Upper Snake River was not, the Snake River has served as an excellent natural laboratory for examining both. However, since climate change has produced longer summers and less snow in the winters, Rue and McKnight discovered that both portions of the watershed are now sending substantial quantities of metals downstream. Longer, lower stream flows allow metals to seep into the watershed more easily, concentrating metals that would otherwise be dispersed by snowmelt.

Rare earth elements are being affected by the same mechanisms that are causing additional heavy metals to enter streams. Rare earth elements were discovered throughout the Snake River by the researchers. “We documented a concentration range of one to hundreds of micrograms per liter several orders of magnitude higher than typical for surface waters with the highest concentrations nearest the headwaters and areas receiving drainage from abandoned mine workings,” says Rue.

They also discovered that increases in rare earth elements in the Snake River linked to rising summer air temperatures, and that rare earth elements are accumulating in insects living in streams at levels equivalent to those found in other hazardous metals like lead and cadmium.

“We’re starting to understand that once rare earth elements get in the water, they tend to stay there,” says Rue. “Traditional treatment techniques don’t eliminate them either, which has ramifications for reuse and prompted several European towns to label REEs as an emerging pollutant in drinking water sources. And considering that the Snake River flows directly into Dillion Reservoir, which is Denver’s largest source of stored water, this could be a concern for the future.”

According to the researchers, studying and investing in methods to collect rare earth elements from natural waterways might generate valuable commodities and assist address acid rock and mine drainage issues, which are expected to increase as the climate changes.

“Rare earth elements are used to make a lot of products. But most of the supply comes from China. So our government has been looking for sources, but at the same time mining has left an indelible mark on the waters of the West,” says Rue. “If we can harvest some of these materials that are already coming into our environment, it might be worthwhile to treat that water and recover these materials at the same time.”

“This problem is getting worse and we need to deal with it,” adds McKnight. “We can have a useful resource and also think about climate adaption if we can handle the problem holistically.”