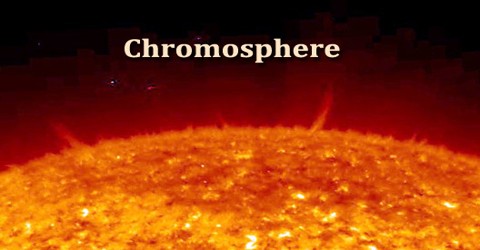 Chromosphere is a glowing, transparent layer of gas surrounding the photosphere of a star. The Sun’s chromosphere is several thousand kilometers thick, is composed mainly of hydrogen at temperatures of 6,000° to 20,000°K, and gives off reddish light. The chromosphere is the second, gaseous, outer layer of the atmosphere of the sun. It stretches from about 250 miles from the sun’s surface to 1,300 miles upward, making the chromosphere 1,050 miles thick. 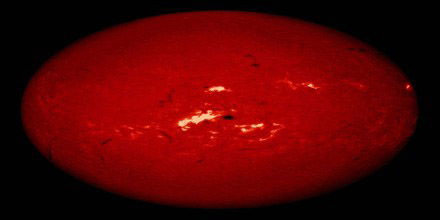 The layer of the chromosphere atop the photosphere is homogeneous. A forest of hairy appearing spicules rises from the homogeneous layer some of which extend 10,000 km into the corona above. The color hues are anywhere between pink and red. However, without special equipment, the chromosphere cannot normally be seen due to the overwhelming brightness of the photosphere beneath.

The chromosphere is the site of activity as well. Changes in solar flares, prominence and filament eruptions, and the flow of material in post-flare loops can all be observed over the course of just a few minutes.

Another phenomenon occurring in the chromosphere is the solar flare, a sudden and intense brightening in a plage that rises to great brilliance in a few minutes, then fades dramatically in a half hour to several hours. This feature is also associated with sunspots and is thought to be triggered by the sudden collapse of the magnetic field in the plage. A flare releases the energy equivalent of a billion hydrogen bombs and is the most energetic of solar events. The ultraviolet and X-ray radiation from larger flares can disrupt magnetic compasses and navigation and radio signals as well as affect the electrical grid on the earth and can damage satellites and space probes. Cosmic rays and solar wind particles from some flares interact in the Polar Regions, creating brilliant auroral displays. 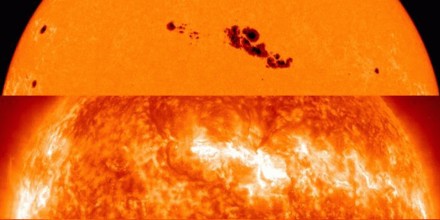 Many interesting phenomena can be observed in the chromosphere, which is very complex and dynamic:

The chromospheric network is a web-like pattern most easily seen in the emissions of the red line of hydrogen (H-alpha) and the ultraviolet line of calcium. The network outlines the supergranule cells and is due to the presence of bundles of magnetic field lines that are concentrated there by the fluid motions in the supergranules.

Filaments are dark, thread-like features seen in the red light of hydrogen (H-alpha). These are dense, somewhat cooler, clouds of material that are suspended above the solar surface by loops of magnetic field. Plages are bright patches surrounding sunspots that are best seen in H-alpha.

The most common feature is the presence of spicules, long thin fingers of luminous gas which appear like the blades of a huge field of fiery grass growing upwards from the photosphere below. Spicules rise to the top of the chromosphere and then sink back down again over the course of about 10 minutes. Similarly, there are horizontal wisps of gas called fibrils, which last about twice as long as spicules.

A spectroscopic measure of chromospheric activity on other stars is the Mount Wilson S-index. 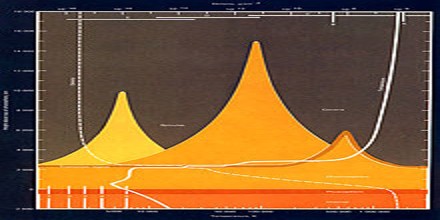 Fire is one of the warmest parts of our daily life, the chromosphere’s temperature ranges between 6,700 and 14,000 degrees Fahrenheit. At this temperature, molecules absorb so much energy, that they transform from gas to plasma, a state where atoms pick up a charge, becoming ionized. This fourth state of matter contains the most energy and isn’t regularly found on Earth.