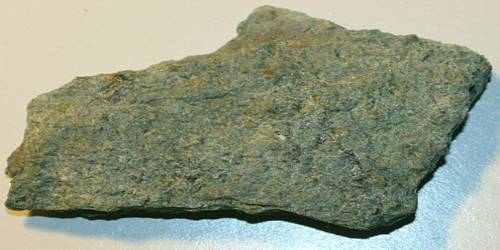 The chlorites are a group of phyllosilicate minerals. It is a general name for several minerals that are difficult to distinguish by ordinary methods. The name chlorite is from the Greek chloros, meaning “green”, in reference to its color.

In addition, zinc, lithium, and calcium species are known. The great range in composition results in considerable variation in physical, optical, and X-ray properties. Chlorite is a common mineral associated with hydrothermal ore deposits and commonly occurs with epidote, sericite, adularia and sulfide minerals. Chlorite is also a common metamorphic mineral, usually indicative of low-grade metamorphism. It is the diagnostic species of the zeolite facies and of lower greenschist facies.

Chlorite is commonly found in igneous rocks as an alteration product of mafic minerals such as pyroxene, amphibole, and biotite. In this environment, chlorite may be a retrograde metamorphic alteration mineral of existing ferromagnesian minerals, or it may be present as a metasomatism product via the addition of Fe, Mg, or other compounds into the rock mass.