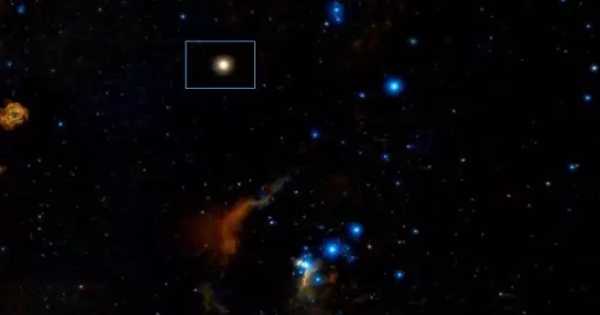 CE Tauri is a red supergiant star in the Taurus constellation. It is not part of the Taurus constellation outline, but it is within its boundaries. It has a diameter that is more than 590 times that of the Sun. It is a semiregular variable with an angular diameter of approximately 10 mas. This equates to approximately 830 million kilometers. It has a diameter nearly equal to Jupiter’s orbit and can be seen in the night sky.

CE Tauri has an M2 spectral class and an Iab-Ib luminosity class, putting it somewhere between an intermediate-luminosity supergiant and a less luminous supergiant. It is approximately 1,800 light-years away from Earth and has a color index of +2.07. It is one of the reddest stars visible to the naked eye in the night sky. It is a star similar to Betelgeuse, but it is redder and farther away.

CE Tauri is a semiregular variable star that has been assigned the variable star designation CE Tauri. The magnitude range is +4.23 to +4.54 with a period of 165 days according to the General Catalogue of Variable Stars. Other published studies discover a poorly defined periodicity with possible periods ranging between 270 and 1,300 days. Its infrared magnitude changes much less than its visual magnitude; changes in visual brightness are caused by temperature changes, which shift the proportion of electromagnetic radiation emitted in the visual range.

Angular diameter measurements can be combined with absolute observed fluxes to calculate an accurate effective temperature, which for CE Tauri is around 3,800 K. The linear size of the star can be calculated when combined with a distance. The radius of CE Tauri is found to be between 587 and 593 R☉. The star’s bolometric luminosity is then determined to be approximately 66,000 L☉. However, the distance to CE Tauri is only estimated using Hipparcos parallax. Gaia Data Release 2 provides a noticeably larger parallax, but with even more uncertainty and is labeled as unreliable.

Although the pulsation has not been clearly detected in direct angular measurements, CE Tauri is a pulsating star. Observations of TiO lines in its spectrum as their brightness changes reveal effective temperature changes of up to 100 K. When its physical properties are calculated, the bolometric luminosity and radius both change by about 10%, with the radius being larger at cooler temperatures.