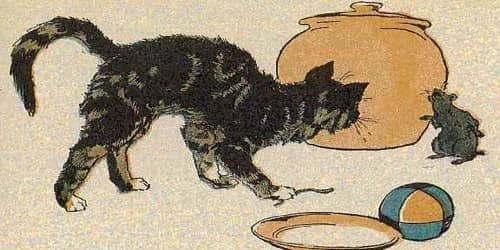 Cat and Mouse (An English Fable)

Long ago, atop a mountain, stood a huge monastery. Inside the monks prayed and worked and ate and slept. Life in the monastery was peaceful and quiet.

Life was peaceful for everyone, that is, except the mice who hid in the monastery walls and in the attic. The mice feared a great black-and-white cat who prowled the monastery halls.

When the cat was young, he caught so many of their fellows that soon the mice learned to stay hidden. As the cat grew older, though, he also grew very fat. The monks fed him each morning, and all day long they fed him table scraps and treats, for he was their only pet.

When the cat grew so fat, he was nearly round, and he no longer could chase the mice.

Before long, word spread through the mouse holes. “The cat can’t catch us,” they whispered. After a while, the mice began to roam out of their holes, and when they happened to spot the cat, they simply ran away. The poor fat cat tried to chase them, but he could not move quickly enough.

One day the cat, upset by the mice roaming through his rooms, decided he must do something. He sat by the window and stared out at the fields where the monks were working. Suddenly he knew just what to do.

He hurried to one of the bedrooms and climbed upon the table where one of the monks kept his scissors. The cat lifted those scissors in his paw, and glaring at his reflection, he carefully cut a bald patch on the top of his head. That was exactly how the monks wore their hair.

Next, the cat scurried downstairs to the laundry room. There he found a pile of the monks’ robes. He looked to his right. He looked to his left. He looked up, and down, and all around, for he wanted to make sure no one could see him. Then he slipped one of those robes over his head and gave it a tuck here and there.

“Now I am a monk,” he announced to no one in particular, and he stood up on his hind legs and walked proudly upstairs. He walked just as the monks walked, and when the evening bells rang, he joined the other monks and walked into the chapel. There, with all the other monks, the cat said evening prayers.

When prayer hour was done, the cat dressed as a monk followed the other monks into the dining hall. When all the monks sat down to eat, the cat sat down with them. Soon he was enjoying the evening meal along with all the other monks.

All this time, the mice watched the cat.

“Do you see his bald patch?” Mother Mouse whispered.

“He has become a monk,” said one of the cousins.

“I saw him say his prayers tonight along with the others,” said one of the tiniest mice.

“And here he is sharing the monks’ evening meal,” said Mother Mouse. “Why, our cat really has become a monk.”

Brother Mouse grinned. “And we all know that monks will eat only the food prepared in the kitchen,” he said.

“We’re safe from the cat,” Father Mouse declared. “The cat has become a monk, and he will never again eat us. Everyone knows monks don’t eat mice.”

“Hooray,” all the mice shouted.

That night Father Mouse proudly walked through the dining room, right under the big cat’s whiskered nose. He danced along the floor, nibbling at the scraps that fell from the table, twitching his whiskers this way and that, pleased as ever any mouse has been.

Suddenly the cat leaped from his chair and caught Father Mouse between his paws.

The cat laughed so hard his belly shook. “Clothing does not make a monk,” he said. “I’m a monk when I wish to be a monk, but I’m a cat when I want to be that,” and he gobbled up poor trembling Father Mouse.

After that, the mice all knew that no matter how a cat wears his hair, no matter what clothes he wears, no matter where he eats or how he walks, a cat is a cat. 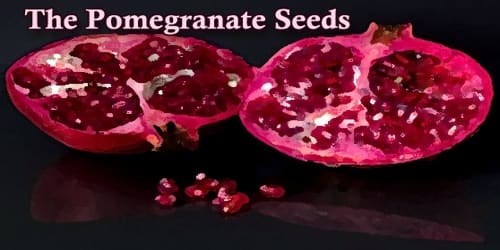 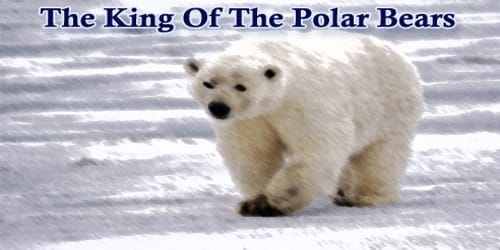 The King Of The Polar Bears